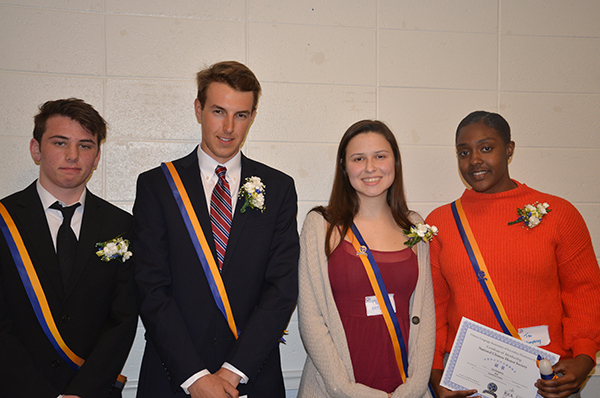 Germantown Academy hosted the 17th Annual Modern Language Honorary Society Dinner and Induction Ceremony on April 11. Eighteen students were inducted into their respective language's honor society by the faculty, who spoke almost entirely in the language of induction.

The Société Honoraire de Français (established in 1949 under the auspices of the Association of Teachers of French), the Sociedad Honoraria Hispánica (founded in 1953 by the Association of Teachers of Spanish and Portuguese), and the 全美中文荣誉学会简介 (established in 1993) are national language honor societies that celebrate the achievements of advanced French, Spanish, and Chinese students. Selection for Germantown Academy's local chapters of these organizations is based on the eligibility criteria set forth by the national organizations. Those criteria include:

The following students were honored:

Not only was the ceremony beautiful with students lighting a candle and inscribing their name into the GA Modern Language Honor Society Journal as they were individually honored, but each student also recited a poem in their studied language.

>
Share to FacebookShare to TwitterShare to Google+Share to LinkedInShare to PinterestShare to EmailPrint this page
GA Students Stand Out at Montco Science Research Competition
Apr 12 2021
GA Students Shine During Virtual Science Fair
Mar 21 2021
GA Cooperative Learning Program Goes Virtual with the Help of Alumni
Mar 19 2021
An Important Message to the GA Community
Mar 18 2021
VIRTUAL PERFORMANCE: "Scenes From A Quarantine"
Mar 12 2021