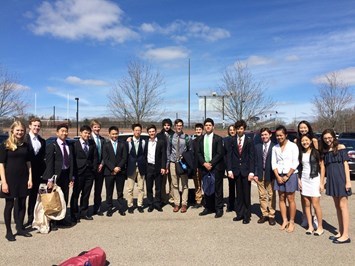 On Wednesday, April 5, 15 Upper School Science Research students competed at the Delaware Valley Science Fair (DVSF), which includes schools from the Lehigh Valley to southern Delaware, and from Chester County to the New Jersey shore. Of those 15 students, 12 students earned first, second, third place, or honorable mention awards, or special awards sponsored by a variety of science and engineering companies and professional organizations, including $875 in cash and $808,000 in scholarship money to local universities.

"Three of our first time Upper School Science Research students performed especially well at the Delaware Valley Science Fair," noted Director of Science Research Sarah Kesten. "Matt Sandifer '20 won first place in Zoology with his project, The Effect of Artificial Sweeteners on Drosophila suzukii. Brynne DiDonato '10 won second place in Zoology and an award from the Institute of Food Technologists with her project, Effect of Vitamin D and Probiotics on Neurons of C. elegans. David Fakhraee '18 won third place in earth and space Science and won two university scholarships with his project, Terraforming Mars with Cyanobacteria. All three students performed their procedures at school or in their home and spent many nights and weekends collecting and analyzing their data. Although many students are interested in researching hypotheses related to human health, using non-human animals as a model allowed Matt and Brynne to perform research outside of a professional lab, in the convenience of their homes or our science classrooms. David's interest in space inspired him to enter a project in earth and space science, which is a vastly underutilized category as geology and space research is often quite difficult at the high school level. Please congratulate all of the science research students, as all of them spent the school year diligently collecting data, preparing a poster board presentation and research paper prepare of their science research project for the Montgomery County Science Research Competition and the Delaware Valley Science Fair!"