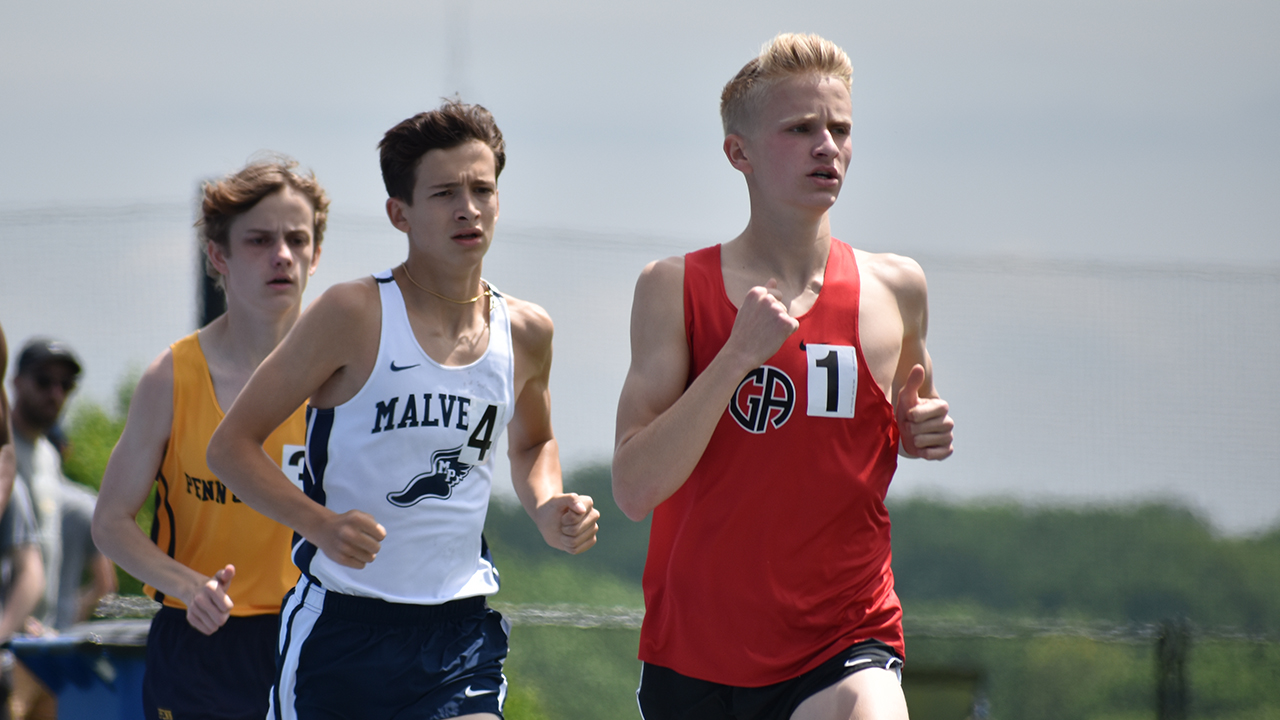 The Germantown Academy (Pa.) junior distance runner is the latest delegate of his school to hit the top in his field of excellence. His rousing 4:15.78 triumph in the boys invitation mile at the 25th annual New Balance Games at The Armory Track and Field Center last Saturday added one more entry to the GA Patriots’ long list of major achievers in one realm or another.

But that tradition – 259 years in the making - is a load he knows he can handle.  The big Armory win was his ticket to the 113th edition of the classic NYRR Millrose Games, back at The Armory on Feb. 8, and a huge confidence-builder.  Slicing his pre-New Balance PR of 4:21.1 to tiny shreds, he fought off Pittsford’s Sam Lawler (who ran 4:15.84) by the narrowest of margins, but is certain he’ll be able to run a whole lot faster by Millrose time.

From where he comes from, time is only a relative matter.

Germantown Academy, in the Philadelphia suburb of Fort Washington, has a history that’s longer than the United States of America’s.

As its archives tell us, "On December 6, 1759, a group of citizens, concerned about the education of their children, met with Daniel Mackinett at the Green Tree Inn on Germantown Road. At this meeting, The Germantown Union School, now known as Germantown Academy, was founded.

"Germantown Academy had its beginning in the midst of the struggle that surrounded the birth and growth of a new nation. The bell tower and the bell that announces the beginning of each school year have become symbols of continuity and perseverance."

Well, GA’s roster of distinguished alumni have rung quite a few bells in their own right.

The list includes such notables of the stage and screen as Bradley Cooper, Jarrod Spector and Deirdre Quinn, and an array of state and national leaders and public servants.

The GA Athletes Hall of Fame proudly lists tennis’ “Big Bill” Tilden, ice hockey’s Mike Richter, football’s Reds Bagnell, soccer’s Jen Hoy, swimming’s Fran Crippen and Katrina Radke, and basketball’s Alvin Williams as inductees.  And, how about David Montgomery – whose rise through the baseball ranks carried him from the coaching job at GA to president of the Philadelphia Phillies? In their world championship year of 2008, too.

Let us tell you that track and field has never been neglected at Germantown Academy, either.

Ready to burst into the big-time these days is Kyle Garland, who has made the logical trip from GA to Ga.  A University of Georgia redshirt freshman, he’s poised to hit the heights of the multi-events world in very short order.

Who can forget his epic performances for GA just two and three years back?  He ran the high hurdles in 13.69, high jumped 7-2, totaled 4169 points in the heptathlon and 7562 in the decathlon, for high placings on all the charts, and twice won the New Balance Nationals Indoor pentathlon crown at The Armory.

Along the way, Garland took the 2018 USATF Junior National decathlon crown, earned  the silver medal at Pan Am Juniors, and ranked seventh at the World Juniors.

The famed Ritz brothers preceded DiDonato as masters of the middle distances for GA. Sam and Ben Ritz headed to Columbia, sibling Owen to Dartmouth.

They hope to get plenty of Millrose consideration, too.

“I gave it everything I had,” said DiDonato. “This was a big thing for me. I knew I had to go for it early, had to run a smart race from the beginning, had to run hard every step of the way. No holding back.

"That last lap, I knew somebody was coming up on me, I just didn’t know who he was.

“All this is super exciting to me,” he exuded.  “That’s the great thing about this sport.

There are always new goals and new targets.  None’s better than the Millrose Games, and no place is better to run than The Armory.

“It’s like a big basketball game atmosphere.  The crowd is always there, and they're right on you. You know you can’t relax.

He’d run a 9:11 3200 meters  as a sophomore, and enjoyed a banner cross country season last fall, placing 10th in the Northeast Regionals, to win a trip to the Foot Locker Nationals, where he placed 31st against the nation’s best.

Dion Lehman is the head track and field coach at Germantown Academy, where he works with Peter Jennings, Matt Notary and Tom Jennings, who lead the XC/distance running coaching corps.

Peter Jennings looks at it this way: "At the core of what we do is cultivate a love for the sport and help our student-athletes see the immense value in pushing their limits."

The silver-haired, silver-whiskered Tom Jennings stepped away from retirement to rejoin the GA coaching staff and now he’s delighted to be back.

“I hadn’t realized I’d miss it that much when I was away,” he said after DiDonato’s big Armory win and with a runner with that kind of talent and potential, he’s back in it for the long haul.  And since he's a star Masters division runner, too, the inspiration level at Germantown Academy runs in all directions.