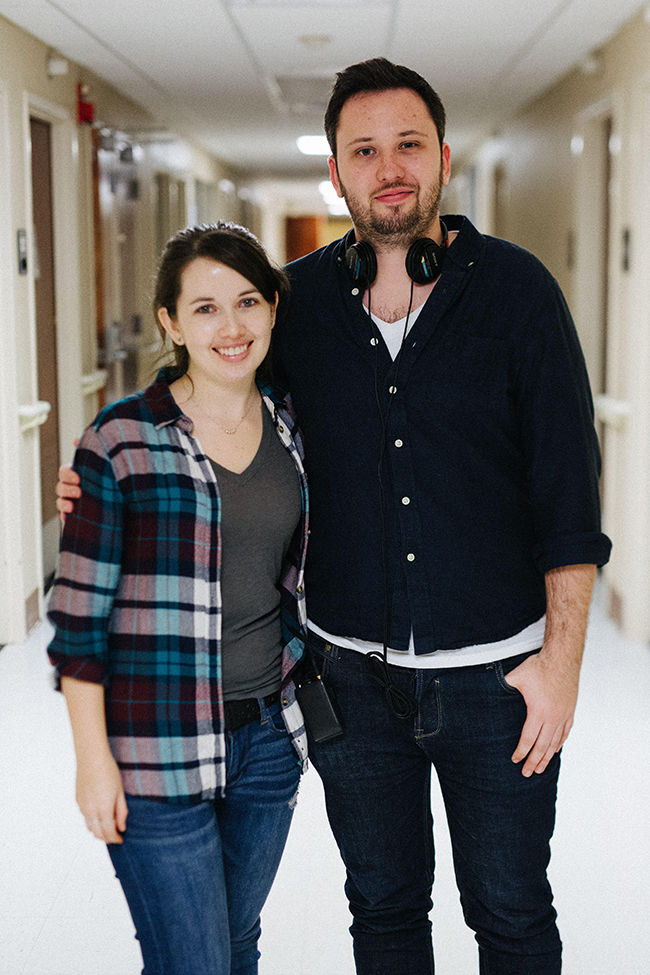 The talented brother and sister duo of Gordon '11 and Mandy '09 Freas, who make up the team at Clementine Pictures, were named to Sony's list of the "Top 10 Emerging Filmmakers of 2018" and were also the grand prize winners of Sony PlayStation's "Emerging Filmmakers Program" in which they sold their concept for Hyperreal. The pilot episode of Hyperreal will be available to watch on PlayStation Vue later this year. Over the last few years, the Freas siblings have created original content for Amazon Prime, Spotify, Wired, and Billboard. In July, our staff caught up with Gordon and Mandy for an interview.

GA: Congratulations! How did this all come came about?

Gordon: The concept started as an idea for a short film that I had in college, which later grew into an idea for a series. This was a few years before big sci-fi shows like Westworld were on TV. And for a while that's all it was. We resurrected the idea when we learned Sony was looking for pitches and developed a more detailed treatment.

Mandy: Hyperreal is an original sci-fi that follows the lives of the researchers and test subjects of the world's first seamless virtual reality engine. I don't want to give any more away!

GA: When you sell a concept does that mean you also wrote and sold a script? A full script for an entire series?

Gordon: Unfortunately, we can't talk about the details of the agreement, but I can say that there is a plan in place for a full series of television and ideas for a second. Whether the series will ever come into being all depends how the pilot performs, which is pretty standard when it comes to television. I wrote the script for the pilot and Amanda worked as a producer and production manager on the shoot.

GA: What was the experience like of pitching your concept?

Mandy: We flew to LA to pitch our concept to Sony last September. Sony's creative heads were in the audience, as well as a few industry experts who were there to lend their opinion of the pitches. For our actual pitch, we were on a stage speaking to the panel. It is always a nerve-racking experience, but it is also a fantastic one. We were excited and humbled to have been asked to share our concept.

GA: Now that you've made the pilot episode what is the next step in the process?

Mandy: Our pilot will be available to watch on PlayStation's platforms later this year. We are excited to be able to share Hyperreal. We've been working on it for a long time, and showing your work to audiences is always the best part. I'm sure viewers will have a lot of thoughts and feedback for the series and we can't wait to share!

GA: What other projects have you worked on or are you working on?

Mandy: Gordon and I run our own production company together called Clementine Pictures. Under that, we have produced work for various clients, including the series [Mixtape] for Billboard. Gordon was the writer/director and I produced it. In fact, that is usually how we split the work on the projects we do together. I produce, Gordon writes and directs. Currently, Gordon and I are working on our feature film called Bluebird Day. We are in pre-production now, but filming should start in September.

Gordon: A little while after we sold the pilot to Sony, Billboard reached out for help developing web shows on their YouTube channel. We worked on a concept and pilot episode for a show we called Mixtape. Before Anyone Else is a web series (Amazon Prime) I wrote, directed, and produced in college with the help of a lot of fellow students. It was my first real foray into creative filmmaking beyond short films and sketches and making it basically served as my very own film school. Around that time, I was also working in freelance video production. After graduating, Mandy and I teamed up to produce video together.

Is your background more in writing or the technical part of video production/film production?

Mandy: I have a Bachelor of Science in Film and Video Production from Drexel University. While there were some great screenwriting classes as part of the curriculum, I focused on the technical and business aspects of filmmaking. Gordon has the experience in writing.

Gordon: I've been writing scripts since I was a freshman at GA. I started writing for Mandy to produce; actually, I think my first real script was for a short film she made (not counting the scripts for our early stop motion stuff which I literally scratched out in crayon, in no discernible format). I did not go to film school, but studied theory and criticism in my time at Northeastern University. In college, I began working as a freelance videographer which started a brief stint making online ads. That and all the sketches I filmed over the years formed my education as a director.

Were you making films together as kids?

Mandy: I think we were nine and ten when we made our first film. We made a stop motion film with our younger brother's train set. We had an old Sony camera, and we did all of the editing for the film in camera, meaning we would stop and rewind the film to get the shots we wanted, editing and filming it as we went along. As soon as we were finished we ran upstairs to show our brother our film.

What skills do you need to make it in the film/TV business?

Gordon: That's tough to say because I feel like we're very much still in the process of "making it," but the biggest lesson I've learned is to take initiative for yourself, to take the lead in your own career instead of waiting for others to give you permission to try something out. That, as well as focusing on relationships. "Networking" is all well and good, but friends are going to be the ones that help you the most.

What were you involved in at GA while you were here? What grades did you start?

Mandy: We were both lifers at GA! I took film classes while I was in high school. I bet some of those films are still around on the Best of GA Video DVDs.

Gordon: I made more than a few videos with my friends in high school at GA, some of which made it into the Best of GA Video Assembly, some were pep rally videos, others were just a way to goof off with my friends. I was never involved formally in Belfry or video classes, but I did do my fair share of performing. I wrote some parts of my fifth grade Forest Fest show, performed comedy sketches in talent shows and senior skits. I was also my senior class's Mr. GA.

Did any GA teachers have an impact on you in terms of pursuing your passion or teaching you how to write and tell stories?

Mandy: I had so many incredible teachers during my time at GA, it would be hard to say which teacher had the biggest overall impact! There are still times that I'll reference something from Mrs. Burnett's class, a video that Mr. Peterson suggested I watch, or something from Mr. Stephens' class. The fundamentals and the quest to continue to learn is something we took away from GA. In fact, we are working on a script for a film, and I find myself falling into the same topic research habits that GA taught me.

Gordon: I loved so many of my GA teachers and got some of my first encouragement as a writer from my history and English teachers. Like Mr. Stephens' history class in 7th grade and Ms. Graffam my junior year. It meant a lot to me at the time and I still look back at the basics I learned in those classes.