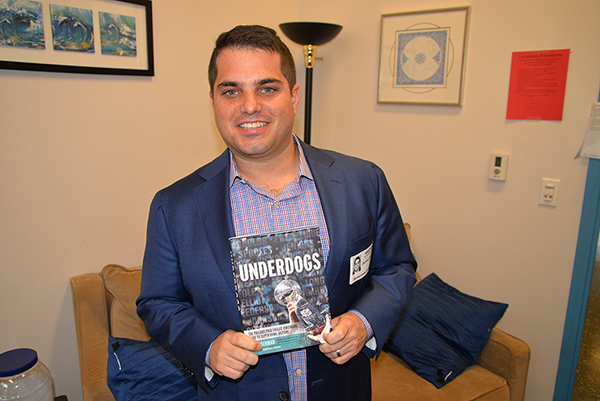 In the 2004 Ye Primer, Germantown Academy's yearbook, alumnus Zach Berman '04 was voted "Best Philly Fan" along with classmate Alyssa Greco '04 in the Senior Superlatives section. Incredibly, just eight years later, in 2012, Berman found himself working around the clock at the Novacare Complex as the Philadelphia Eagles beat reporter for the Philadelphia Inquirer. He was there for Andy Reid's final hurrah as head coach, the ups and many downs of the Chip Kelly experiment, and, of course, the Eagles' epic journey through the miraculous 2017-18 season that ended with back-up quarterback Nick Foles and company hoisting the Lombardi Trophy, the first-ever in franchise history, at Super Bowl LII.

Berman masterfully documented the wild ride in his new book Underdogs: The Philadelphia Eagles' Emotional Road to Super Bowl Victory. He returned to campus on November 2 to talk to students about Underdogs, the book-writing process, his professional journey, and his responsibilities as a beat reporter.

After graduating from GA, Berman went on to study journalism at Syracuse University. He then went on to write for the Washington Post, Newark Star-Ledger, and New York Times before moving back to the area. He regularly appears on Comcast Sportsnet and local sports radio stations. Our team caught up with Zach during his visit for a short Q&A. See below.

What do you want the public to know about this book?
What I want are readers to get a full sense of what made the team special. So not just the games they won, and they played well in the games, but how was the team put together? Who were the characters behind the team being put together? What are their back stories? The great moments of the season. How did those come about? What were the decisions that led up to them? I think this book really takes you behind the scenes in terms what those moments were, what made those moments special, and the people behind it. I really wanted to focus on the people. I didn't want it to just be about the game or winning the Super Bowl. I wanted it to be about the people who made it special.

What stood out to you when you referenced your notes?
The way I started the book was in the locker room after the game. You always imagine when a team wins the Super Bowl, the players are at the pinnacle of their professional careers—what is that like? I was allowed behind the scenes. I was in the locker room. I saw them celebrating. I saw Doug Pederson's postgame speech. You usually only see that in movies. Here am I listening and recording and seeing the faces of everyone around Doug Pederson as he is saying it and when Malcom Jenkins gives his speech. I wanted that moment conveyed well. And then further, over my time covering the team, I have had the chance to get to know a lot of these players and the management. For instance, I've been to Yazoo City, Mississippi where Fletcher Cox grew up. I've been to North Dakota where Carson Wentz is from. I've been in Malcom Jenkin's home. I show how the kicker Jake Elliott started playing football by a random encounter; he was seating in the stands at a high school pep rally and got called to kick. I show where Jalen Mills gets that swagger he is known for and where that comes from. I show how Zach Ertz decided to play football and kind of what made him unique in his career and how he used some struggles early in his career to kind of develop into the player he is. Howie Roseman, who had this kind of fall from grace and came back—I chronicled the whole thing. I try to show how Howie got his start, how he rebounded from where he was, and then what it was like in that moment. The team owner, Jeffrey Lurie—I was in the team hotel interviewing him for an hour the week of the Super Bowl. I kind of show what he feels makes a successful franchise. He has a list that he keeps next to his bed and he added something to that list after they fired Chip Kelly and I kind of show what that is. All of these are examples of how I try to take the reader behind the scenes and show what made this team special.

What was it like to cover a Super Bowl and have the pressure of writing a great story to match the game?
I admit that leading up to it, that week and the day of the game, I kept thinking how am I going to write this story. I kept thinking of how would I craft this story. I thought about the historical significance of this story. Had they won, if they won, and obviously they did end up winning, I would be writing a piece of Philadelphia history and I would be writing the first draft of it. How do you want that story structured? How do you want that framed? This is even before the game. This is even before you know what happens. I want to make sure I captured the historical significance of the event and then as the game is unfolding you see the "Philly Special" and Doug Pederson going for it on fourth down and then you see Zach Ertz's go-ahead touchdown and Brandon Graham's forcing the fumble. You know these are going to be some of the great moments in Eagles' history and Philadelphia sports history...How am I going to convey that in the story? I have a deadline. I have to have my running story finished. Once that ball drops and there are zero on the clocks I have a story going in. That story is going online and early editions of the paper. As the game is going I am writing the story. You kind of develop those muscles over the course of your career, but it's a huge moment for the players and the coaches and its a huge moment for me too. This needs to be the best running story I've ever written. It was pressure-packed, but a fun process. It was the most exhilarating moments of this job for me. I remember clicking send and then you go down to the locker rooms and you are talking to the players and in all this you need to go back up and get this into the next edition of your story. I remember being on the elevator and you're thinking how am I going to frame this, where am I going to put this quote, and then you just get down and you write it. A lot of it is adrenaline, but I always say when you're on deadline you're using all these skills you developed over time and a lot of it is what you developed when you were in Middle School English and Upper School English at GA because the quotes and the information is obviously unique to the game, but the way you use the language, the way you kind of manipulate sentences, or even something as fundamental as the grammar you use, that came when I was here. It was a great moment in terms of being able to cover that and I'm proud of the finished product.
How does it feel knowing that teenagers out there are reading your stories the same way you read some of the great Eagles scribes of the 1980s and 1990s?
When I write these stories I think of the 15-year old sitting in the Philadelphia area reading that. I have that person in mind. It's still hard for me to think that I am that person. If there is a student here who is reading that and looks up to me the way I looked up to other writers that is kind of the ultimate compliment. That is why you want to go into this business.
Share to FacebookShare to TwitterShare to Google+Share to LinkedInShare to PinterestShare to EmailPrint this page
Upper School Honors 16 Modern Language Students
Apr 15 2021
GA Students Stand Out at Montco Science Research Competition
Apr 12 2021
GA Students Shine During Virtual Science Fair
Mar 21 2021
GA Cooperative Learning Program Goes Virtual with the Help of Alumni
Mar 19 2021
An Important Message to the GA Community
Mar 18 2021