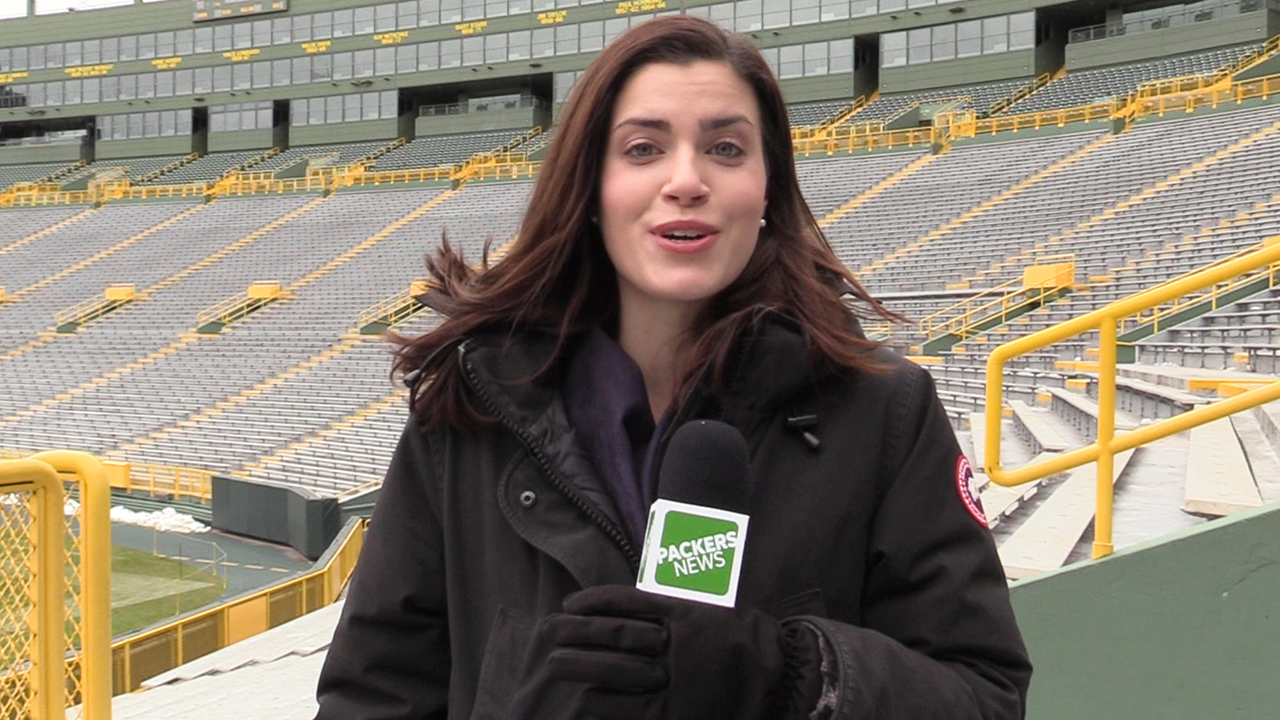 These days, a typical workday for Olivia Reiner '14 is all about the game of football. As the (fairly) new Green Bay Packers multimedia reporter for the Green Bay Press-Gazette, Reiner is tasked with creating daily digital video reports with beat writers to discuss news, practices, roster moves, and more.

“On game day, I host a live pre and postgame show on Facebook where I field fan questions and discuss the game with another beat reporter,” said Reiner. “I’m also in the locker room daily talking to players and I post clips of locker room interviews online. In the offseason, I’m working on some longterm feature projects and getting prepared for next season. These are just a handful of my responsibilities!”

Reiner’s love of storytelling began during her days here at GA. As a multi-year member of Dainis Roman’s digital media classes, she was given a solid foundation in video production.

“GA’s digital media class helped me so much,” said Reiner, who notably led a student-created documentary about legendary mural artist Isaiah Zagar’s collaboration with the GA community. “I learned how to edit video with Final Cut and how to use Photoshop in digital media my freshman year. Being introduced to those skills early on gave me a huge leg up in college, when I learned how to use the Adobe Creative Suite, including Premiere Pro. I spend so much time in Premiere, Photoshop, and After Effects daily because of my job. If I hadn’t been introduced to video in high school I don’t know if I would have pursued this career.

“I can’t begin to explain how much of a factor GA was in my preparation for my current job,” added Reiner. “My experiences at GA made me a better writer, which is integral to my job. So much of video is rooted in strong writing. I gained a lot of confidence academically at GA, which pushed me to strive for the best in college.”

Reiner’s love of documentary storytelling continued at the Medill School of Journalism at Northwestern University where she earned her Bachelor of Science and Master of Science degrees in Journalism. Reiner was also the recipient of the 2018 William C. Fyffe Award and the 2018 Gary Cummings Memorial Award, honors given to a Medill student who excels in broadcast journalism. Her work also has been nominated for a Chicago/Midwest National Academy of Television Arts & Sciences student award. A 45-minute documentary that she produced with two other Northwestern classmates will be premiering at the American Documentary Film Festival (March 29-April 4 2019) in Palm Springs, California.

But for the moment, Reiner is focused on big NFL offseason, which in many ways is as explosive and time-consuming as the season itself. She’s looking forward to covering the NFL Draft in addition to producing some longer features focusing on players and fans.

Reiner joined the Green Bay Press-Gazette in early October, something that still, at times, feels a bit surreal to her.

“Being in the locker room was definitely surreal,” said Reiner, who previously interned with the New York Islanders, The Players’ Tribune, NBC Sports Chicago, NBC Sports, and WGEM-TV in Quincy, Illinois. She also covered the 2018 Winter Olympics in Pyeongchang, South Korea as a freelance reporter for The Philadelphia Inquirer and AM New York. “I’m lucky to have had experience in professional locker rooms before, so I wasn’t completely out of my element. I came into this role mid-season, so it took me some time to get comfortable and build relationships with some of the players. I’m looking forward to building on that next season. Even though the jitters have gone away for the most part, I hope I never lose that “surreal” feeling. I’m very grateful to be in the position that I’m in.”