Share to FacebookShare to TwitterShare to LinkedInShare to PinterestShare to EmailPrint this page
Middle School Readers Become Olympians
April 30, 2017

On Thursday, April 20, a dozen sixth graders set out to compete in the Bucks County Reading Olympics competition, held at the Cecelia Snyder Middle School in Bensalem. Led by their coaches, Middle School English teacher Glenda Daulerio 1760 and Middle School Librarian Sarah Blake, this enthusiastic group of readers faced three teams who were primarily composed of eighth graders. Undaunted by the older students, they accomplished the goal that they had set out for themselves: bringing home the highest honor, a blue ribbon, which was presented to each of the students at a Middle School Morning Meeting. Olympians included Elizabeth B., Caitlyn C., Max G., Ben H., Emma K., Kara L., Ruby M., JJ O., Amelia R., Asher S., Jacob S., and Sam W.

This was the team’s second blue ribbon in as many years. Last year, under the guidance of Assistant Head of Lower School Allison Sasson, they competed on the Lower School’s first Reading Olympics team and earned blue ribbons in competition. Wanting to capitalize on their success and love of reading, Daulerio met the excited fifth graders at lunch after their competition and welcomed them to the Middle School team.

“I have never seen a more enthusiastic group of readers," Daulerio said. “I couldn’t wait for them to arrive in the Middle School!” 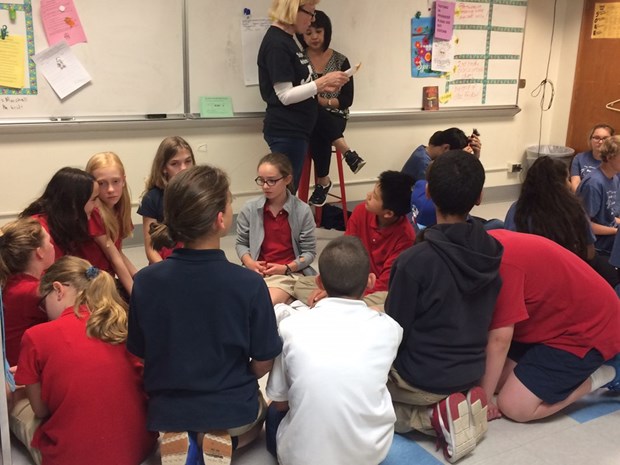 Eager to take home blue ribbons again, these busy booklovers tackled this year’s Reading Olympics list with ease. At each meeting, the students conversed passionately about their favorite books, encouraged others to read them, and carefully charted their progress on a shared Excel spreadsheet. With students already requesting the 2017-18 reading list, the Middle School Reading Olympics team has its sights set on next year's competition.