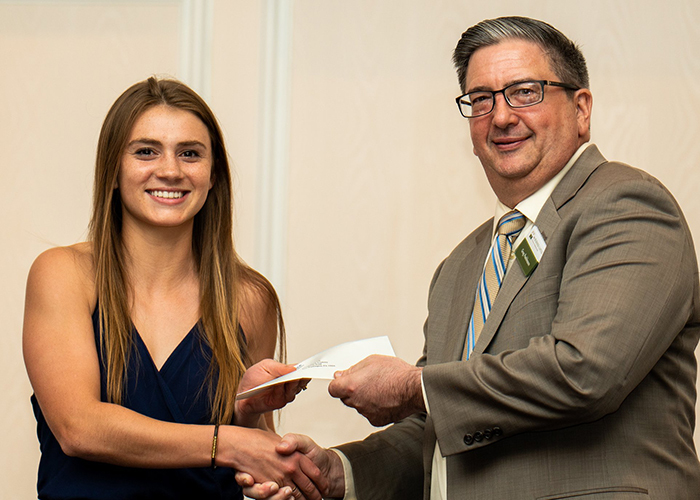 On Thursday, May 10, senior student-athlete Mackenzie Pluck '18 was the recipient of a fifth-place award and a $500 scholarship prize at the Triangle Club of Montgomery County's 55th annual William F. Dannehower Banquet at Presidential Caterers in East Norriton for her outstanding accomplishments in athletics, academics, and community service.

Every year, the Triangle Club recognizes high school seniors, selected by their schools, for their outstanding accomplishments in athletics, academics, and community service. Public and private high schools throughout Montgomery County recommend one senior for the Dannehower Award by submitting the student's application and resume to the Triangle Club's selection committee for review. After careful consideration, the committee chooses the Dannehower Award winner as well as runner-ups. The event provides an opportunity to publicize the achievements of these outstanding young men and women. All honorees are given individual recognition and their accomplishments read to the audience at the time of the dinner. 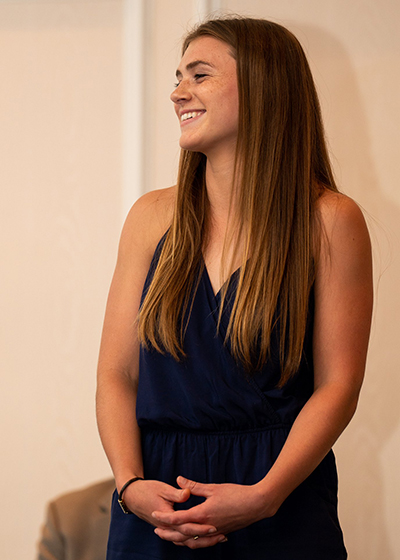 "Winning this award allowed me to reflect on what I have accomplished throughout my high school experience in not only athletics, but in academics and community service as well," said Pluck. "I was able to step back and acknowledge how far I have come, yet also stay motivated to continue the hard work in the next chapter of my life. Receiving this award reminded me how fortunate I am for all of those who have helped me along the way, including family, friends, coaches, and teammates."

During her time at GA, Pluck was not only a leader on the field, but in the classroom as well.

"Mackenzie Pluck is an exceptional young lady," wrote Dr. Yvette Márquez-Pribitkin, Upper School Spanish teacher and Community Service Organization advisor. "I have had the pleasure of working with Mackenzie for two years in the classroom and in the Community Service Organization at Germantown Academy. In both settings Mac has shined as a natural and compassionate leader. She always moves class discussions or CSO projects in a positive direction with her enthusiasm and organizational abilities. What impresses me the most about Mac is that, despite knowing from very early on where she would attend college, she has never been content to rest on her laurels and has worked tirelessly on her academic studies. Her discipline and hard work have paid off inside and outside of the classroom, and she has become a role model for her peers. She has grown into herself and has become a respected and even beloved leader especially within CSO. Whenever we find ourselves needing a volunteer for any activity requiring organizational expertise, Mac is the first person we ask."

"When Mac's name comes up, her teachers invariably say something like, 'Oh, she's awesome!' Why? Because she's the kind of cheerful, enthusiastic, hard-working, innately curious student we all love to teach," wrote Graffam. "She meets every challenge with humility and determination, and she radiates a love of learning that's both admirable and contagious. She is, in short, the kind of student we all hope to see in our classes. I got to work with Mac in English 10, and again last fall in an English course called The Good Life. In both courses, she was consistently one of the most reliable contributors to class discussions, willing to ask a question when others were too shy, or to share an observation that revealed her careful reading and interpretive skill...She is an exemplary student and a delightful person, and I have every confidence she'll throw herself into her college experience just as she has done with everything she's encountered here." 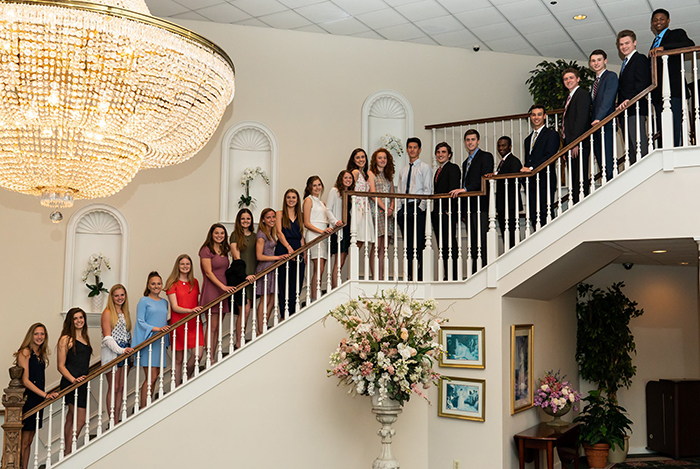 Out on the soccer pitch, Pluck, a midfielder and forward, quickly made a name for herself by racking up 18 goals and five assists her freshman season. She went on to have an unbelievable career here at GA, one in which she finished with a mind-boggling 80 goals and 41 assists. As a sophomore, she played a key role in helping the Patriots win the 2015 Pennsylvania Independent Schools Athletic Association Tournament title; Pluck tallied 23 goals and 14 assists that season. The Patriots finished runner-up in 2014 and were knocked out in the quarterfinals in 2016 and 2017.

Pluck recorded a career-high 26 goals and 15 assists her junior season. Despite missing part of her senior season due to injury, Pluck, a co-captain, still managed to score 13 goals and dish out seven assists.

During her time at GA, Pluck was ranked No. 21 in the TopDrawerSoccer.Com's Top 150 and has been in the Top 25 since 2014. She was named the No. 2 player in the New Jersey region and tabbed the No. 9 midfielder nationally. She earned All Inter-Ac League honors her last three seasons and was named to the All-Southeastern Pennsylvania Girls Soccer Team twice (First Team – 2016, Second Team – 2015). Pluck was also a High School All-American East Team selection in 2017 and 2018 and also named a High School All-American East Best XI in 2018. The rising star was named to USA Today's All-USA Preseason Girls Soccer Team in 2017 and 2018. The Intelligencer named her a Top 5 Player and a First Team selection.

Outside of GA soccer, Pluck, who also has a glowing club soccer resume, was a three-time U.S. U-14 National Team Training Camp Roster member and took part in the U.S. Soccer East Coast U-16 Combine in 2015.

In school, Pluck was the recipient of the Gummey Memorial Award, a prestigious honor given to a junior class member who makes the greatest endeavor in athletics and scholarship, and an active member of the Honors Arts Program as well as CSO leader and Freshman Seminar Leader. 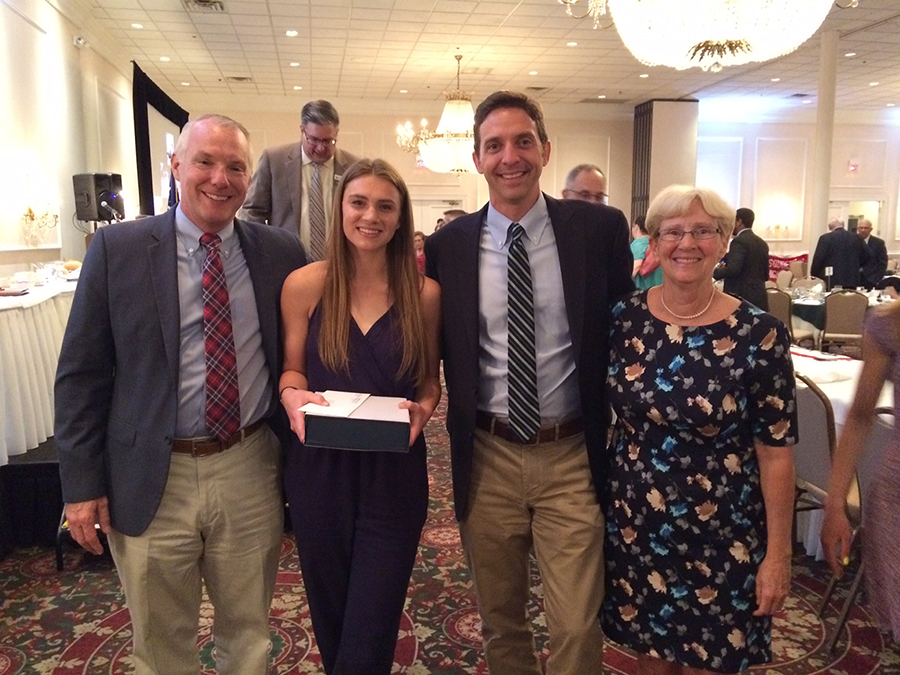 "Without a doubt, Mackenzie Pluck is far and away the most talented soccer player I have coached in my twenty-five-year career," said Head of School Chris Nelson, who has also served as the varsity girls' head soccer coach for the last six seasons. "She can do things with a soccer ball at her feet which most athletes cannot accomplish with the use of all of their appendages combined. And, both the pace and the power at which she does so is, simply put, staggering. As a player, she manufactures opportunities out of the ether, finding passing lanes, goal-scoring opportunities, and space on the field where none seems to exist. All that said, these attributes are really the least of what Mackenzie brings to the field and to our team. Among her greatest strengths as a player – and I would argue as a person – are her unparalleled work ethic, her relentless competitive spirit, her unbridled joy for the game, and, perhaps most importantly, her unwavering commitment to her teammates."

Pluck will continue her career in college at Duke University.

"I'm looking forward to all of the amazing opportunities Duke has to offer as an interdisciplinary liberal arts university," said Pluck. "What I'm most excited for is opportunity to play for a team that has a very high chance of winning a national title, while still being able to focus hard on my studies and making time to be a part of their service programs. It's a place full of endless opportunities and I can't wait to embark on my upcoming journey there."

Pluck, who started at GA as a freshman, certainly feels appreciative of all that her teachers have done for her.

"GA teachers have always been so supportive and encouraging with all my endeavors," said Pluck. "Mr. Nelson, who doubled as our head soccer coach, has been tremendous for the past four years on the pitch, and I feel extremely fortunate for his unconditional belief and support throughout my career. Community service wise, Mrs. Marquez and Mrs. Wexler have had such a positive influence in my life. They reminded me the importance of being selfless and power of giving back. Academically, Mrs. Graffam has been a role model of mine, for she has challenged me and helped me progress as a student throughout my four years at GA. Lastly, I would like to acknowledge the impact of Mr. St. Jean. He too, has been a role model of mine for his genuine care for everyone and his unwavering work ethic."