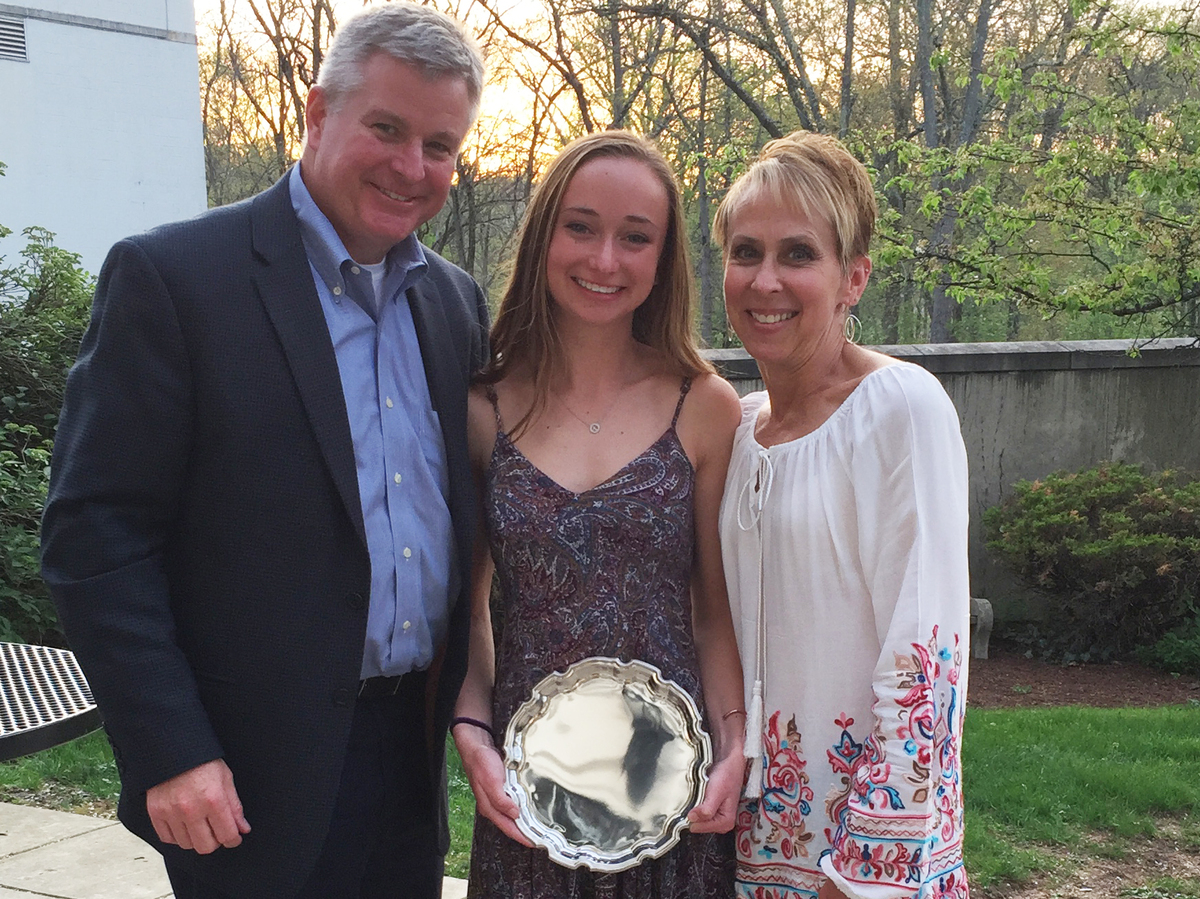 If you hang around the track at Carey Stadium long enough then you're bound to see senior Kelsey O'Hara '18 zip by. O'Hara has made the track as well as the cross country course here at Germantown Academy her second and third homes over the last four years, during which she has earned 12 varsity letters in cross country, winter track and field, and spring track and field. For her incredible contributions, leadership, and sportsmanship she was GA's 2018 honoree at the annual Girls Inter-Ac Athletic League Athletic Directors' Award Dinner on May 2.

"Kelsey O'Hara epitomizes the true student-athlete and the best of the Inter-Ac League," said Upper School History Teacher and Head Varsity Girls Cross Country Coach Judy Krouse 1760. "As a three-season student-athlete for all four years, she has shown dedication and perseverance and has grown and improved as an athlete and person in immeasurable ways. She's also a leader, on and off the track and trail, and someone who I was proud to support as GA's choice for the Inter-Ac award."

The Girls Inter-Ac Athletic League Athletic Directors' Award is given by the league in honor of past athletic directors. It is presented annually to a senior girl who has been a multi-sport varsity athlete and has exemplified the following characteristics: dedication to her team and school, outstanding representative of the Inter-Ac League, leadership, and sportsmanship. Each Inter-Ac school honors one senior girl. During her time at GA, O'Hara has helped the Patriots' girls cross country team capture back-to-back Inter-Ac League and Pennsylvania Independent Schools Athletic Association titles. On the track, she recently shattered an 18-year old school record in the 400-meter event by clocking in at 58.51, and in school she has led throughout the year as a Prefect of Truesdell House.

"It is such an honor to have received this award," said O'Hara, who plans to run track (200, 400, 800 events) at College of the Holy Cross. "There are so many amazing student-athletes here, and it is such a rewarding feeling to be recognized as one of them. I wouldn't be the athlete or person I am today without my coaches. Coming into GA, I had never raced anything longer than half a mile, so I was really nervous to be racing for over three miles. Coach Krouse, along with Coach [Brent] Freedland and Coach [Abby] Perkiss, has helped me become a strong distance runner, and she is one of my biggest fans no matter what I am racing. She is one of my biggest mentors. Coach [Dion] Lehman also has been one of my biggest supporters, and never gave up on me even when I was struggling to see improvements. His faith in me got me to where I am. He never stops believing in me. Even though I have never trained for a whole season under Coach [Pete] Jennings, he has always welcomed me into distance workouts and is always cheering me on both in practices and meets. Coach Lawrence and Christina Johnson have also helped me tremendously. All of my coaches have taught me the importance of never giving up."