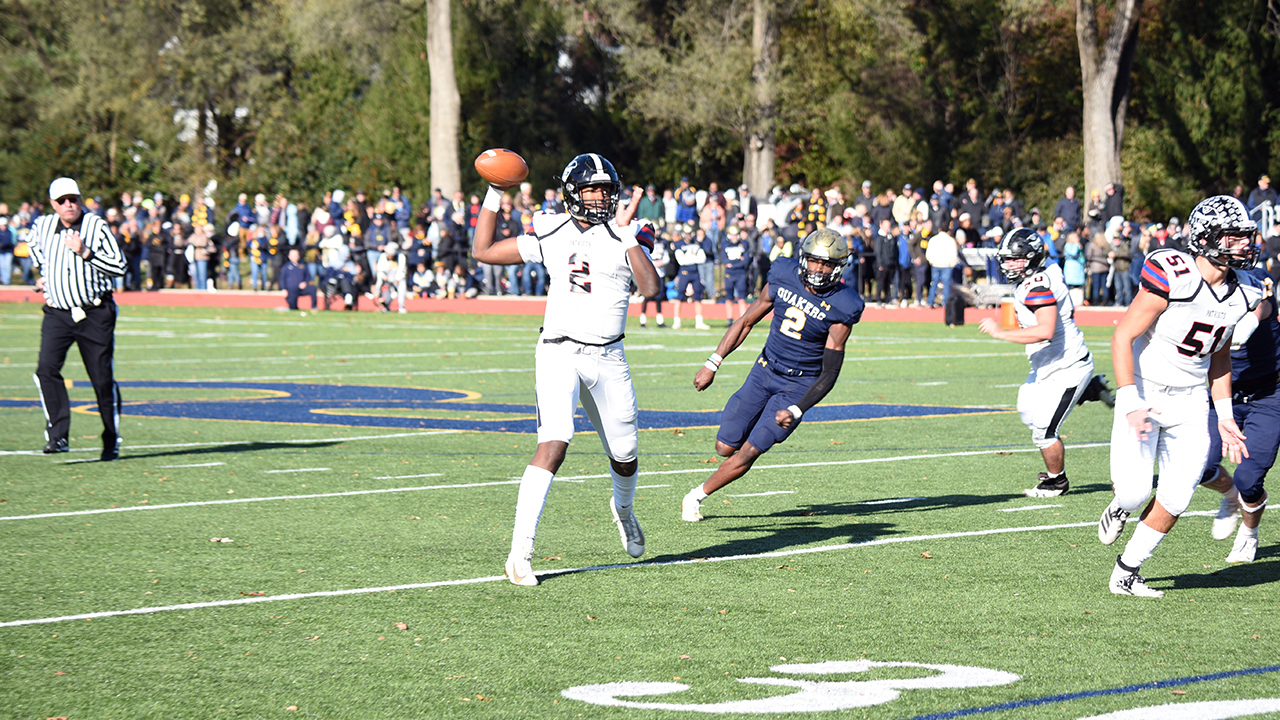 It’s a blueprint that served his family well in the past.

It’s also a plan that could help Germantown Academy junior Jordan Longino, a two-sport standout, choose which of his loves to pursue at the high-major Division I level.

Pinned above the dynamic, 6-foot-5 quarterback’s bed in the family’s home in Bucks County, are handwritten goals sandwiched between a baby picture of Longino with his older brother, and a Germantown Academy poster.

Longino, also a smooth-operating shooting guard for the Patriots, first put pen to paper a few years ago at the behest of his father.

“Sometimes when my dad tells me to do stuff I might be like, ‘Are you serious?’” Longino said in a phone interview. “But he stayed after me. And the first time I did it, I was like, ‘Oh, wow. This really helps.' And I’ve just kinda done it every school year.”

On the basketball court, that approach has helped to draw college interest from Villanova, Virginia, Michigan, and Indiana. Official offers have already come from Florida, Temple, La Salle, Penn State, Rutgers, and Rhode Island, according to 247Sports.com.

In football, Northwestern and Penn State have inquired about the strong-armed quarterback’s services, according to Germantown Academy coach Matt Dence.

“One of my long-term goals has been to play in a power-5 conference in football or basketball and then eventually try to reach the NFL or NBA,” Longino said.

The written goals, however, are just the beginning. He also writes the “inputs” he believes will make them a reality.

The strategy worked for his father, Eric.

He later became a 6-foot-4 guard who led the University of Illinois-Chicago in scoring before transferring to Southern Methodist University, where he finished his college career.

After college, Eric Longino had a tryout with the NBA’s Cleveland Cavaliers. He also played briefly in the CBA with the Sioux Falls Skyforce, and was a graduate assistant coach in college.

“What gets you to the goal is what you do every day,” Eric Longino remembers his dad advising.

Now an executive at a major pharmaceutical company, Eric Longino said he modernized the language of the approach: “Maximize the inputs.”

After starring in basketball and baseball at Germantown Academy, Evan-Eric Longino chose basketball in college. He is now a redshirt sophomore guard at Kutztown University.

“It’s kind of like a tangible thing to look at almost every morning,” Jordan Longino said, “so you can see what you need to do.”

As a freshman on the court, Longino finished second in Inter-Ac scoring (21 points per game) -- just 13 total points behind top-scorer Deuce Turner of Malvern Prep.

Sophomore year, Longino finished with the third-highest scoring average (22.6 points) among players from the Catholic League and Inter-Ac, according to TedSilary.com.

At quarterback, a right-knee injury scuttled his entire freshman football season. Another tweak to that same knee cost him the second half of his sophomore season.

This season, he finished in relative good health with 1,964 passing yards, 16 touchdowns, and 4 interceptions. He also added 277 yards and 6 more touchdowns on the ground.

His poised and measured style of play in both sports, Longino said, will likely mirror the way he’ll decide which sport to play in college.

“That’s kind of my personality,” he said. “I like to see things happen in front of me. I don’t like to move too fast.”

That translates to a crafty, mid-range game on the court and a pass-first mentality on the field.

A recent basketball recruiting trip to Penn State put him back in touch with another quarterback-basketball standout from Germantown Academy, Kyle McCloskey, who started his college career playing football at Villanova before transferring into the Nittany Lions basketball program.

The two talked, Longino said, and he will continue to seek input from family, friends, and his AAU coaches within the Philly Pride organization.

“But, ultimately, it’s going to be my decision,” Longino said. “Right now, I just enjoy playing both [sports] and I’m just enjoying the recruiting process and taking everything in.”

His goals for the upcoming basketball season might change, but the goals of his parents, Eric and Tayna, remain the same.

“I want him to determine his own destiny,” Eric Longino said. “We want Jordan to do what he loves to do.”