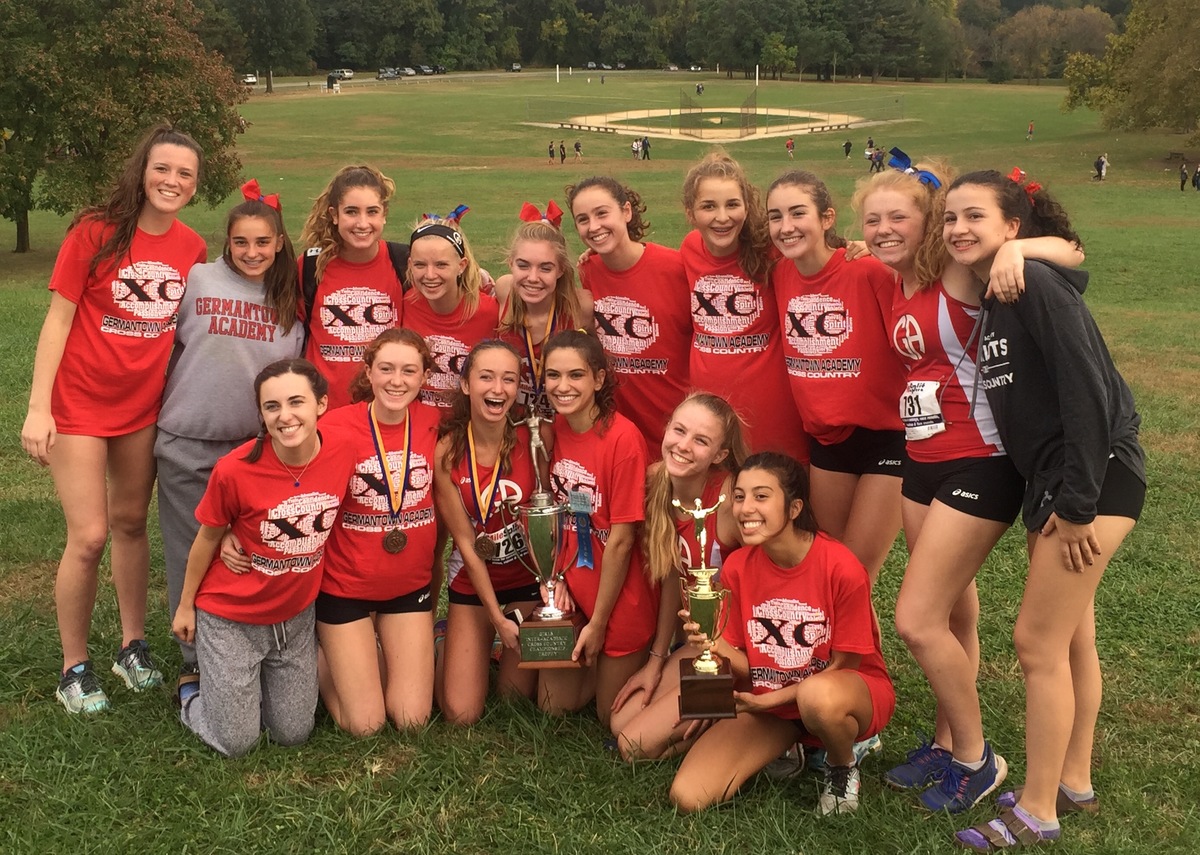 PHILADELPHIA—"This is everything we've worked for."

It's a statement that read loud and clear on the back of the Patriots' shirts at the 2017 Inter-Ac League Championship where they defended their title by defeating Penn Charter by a mere eight points to finish first overall last Monday.

"It's based on something that co-captain Sydney Sciascia ['18] said earlier in the year," explained GA Girls Cross Country Head Coach Judy Krouse 1760. "I think that the girls felt that on Monday."

And by the looks of it, they felt even more strongly about their slogan on Saturday at the 2017 Pennsylvania Independent Schools Athletic Association Championship Meet at the Belmont Plateau in Fairmount Park where they held off Friends Central School to win their second state title in a row—this time by a mere 12 points.

"They didn't back down and they persevered through everything," said Krouse. "It felt amazing. We thought that we had a chance to win, but they were pretty beaten up after Monday, so we weren't sure what to expect. It's really tough to bounce back after the emotional high of a day like Monday and get psyched to run again, but the girls dug deep and impressed all of us."

Isabelle Goldstein '20 finished second overall to lead all GA runners. Her time of 19:08.30, which met the MileSplit U.S. Second Team standard, was a personal record and the fourth fastest time in the history of the PAISAA Girls Championships. For her efforts, she was named First Team All-State.

"After seeing the kind of spring that Issy had in track, I was pretty confident that she was going to have a great season, and she hasn't disappointed," said Krouse. "She ran an incredible race on Saturday and pushed the eventual winner (Emma Zwall of PC) to the limit. She has the benefit of seeing everything that [her sister] Abbe [Goldstein '17] did during her time at GA and Issy has learned those lessons—in preparation, training and focus—well. I'm really proud of her for stepping up and never backing down in the face of a challenge."

Goldstein was followed by Gianna Murgia '20, who placed eighth overall and earned Second Team All-State honors along with Kelsey O'Hara '18 and Anna Hennessy '18, who finished 12th and 13th respectively.

"Because it was a twelve-point win, there was no one specific moment of somebody having to run someone down, but I give props to Kelsey O'Hara and Anna Hennessy for holding off a pack of girls behind them. Anna, in particular, was tough in the home stretch," said Krouse. "And Gabby Manosis, as our number five finisher, played a huge role, too, by finishing in twenty-second place."

The Patriots found success last year, but this year felt a little different at times as they were never really 100 percent in terms of health, but they found a way to climb atop the mountain again.

"It says they're a bunch of hard-working fighters," said Krouse. "We kept asking them to "trust the process" and sang Don't stop Believin' to them, especially after a bad loss to a tough PC team earlier in the year when we weren't even close to being at full strength. We were confident that, if everyone was healthy at the right time, that we'd be able to do great things, and they did."

Krouse and her coaches, Brent Freedland and Abby Perkiss, also had the luxury of a strong senior class to lean on and to lead the younger Patriots.

"Jackie DeRusso, Anna Hennessy, Kelsey O'Hara, Grace Rittenhouse and Sydney Sciascia—they showed tremendous leadership all year, especially in guiding all of the younger and new girls," said Krouse. "Big props to Kelsey and Syd for being amazing captains. Kelsey is the queen of the pep talk."

"The JV were amazing!" said Krouse. "Mackenzie, Molly Oeth, and Zoe Torrey were all new to the sport this year and were really impressive and ran really well."

"Even though we, as a coaching staff, have been here before, it never gets old to see the joy on the girls' faces when they win," added Krouse. "It makes it all worthwhile when you see how happy and proud they are. We were happy and proud too."

The Patriots will close out their season on Saturday, November 12 when they face Penn Charter on GA-PC Day at PC. The race starts at 10am.