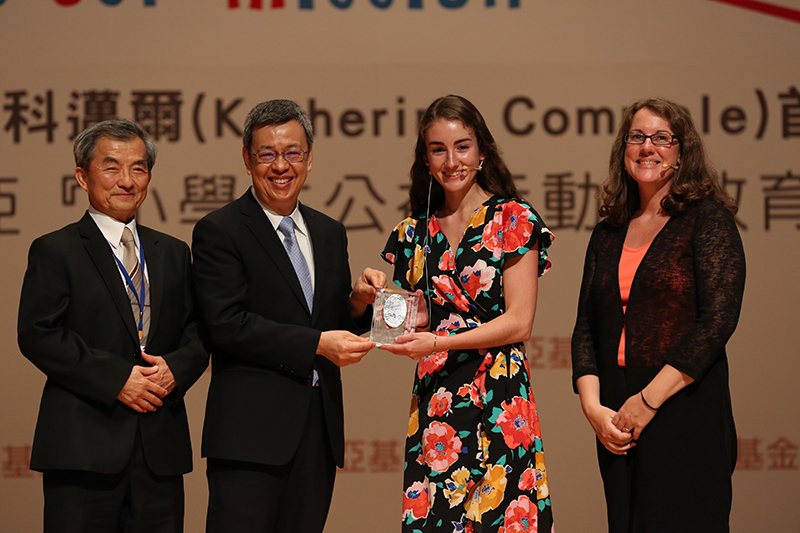 Earlier this month, Germantown Academy senior Katherine Commale '19, was honored in Taiwan for her incredible work in raising awareness about malaria and funds to purchase nets that can that kill mosquitoes before they can transmit the deadly disease. For her noble work, Commale received the Global Charity Ambassador Award from Chen Chien-jen, Vice President of Taiwan. She, along with her parents, Lynda and Anthony, GA's Director of Community Service, and brother, Joseph '21, also had a chance to meet President Tsai Ing-wen. Overall, the Commale family was given nothing short of the royal treatment during their weeklong visit to Taiwan.

"It was surreal for both me and my entire family to be "famous" for the week," wrote Commale. "I had always heard that my story and work with Nothing But Nets was popular in Taiwan, but to finally see it firsthand was definitely a shock! It took some time to get used to being hooked up to a microphone and having camera crews follow us around! Specifically, the day of the HERO Talks event, there were so many students, teachers, and parents lined up to meet me after my speech. And while the director was worried that the crowds would overwhelm us, I think meeting all of the students was the highlight of my entire trip. We were showered with love and even had to buy another suitcase to fit all of the gifts they gave us! It was weird signing autographs and taking photos, because I never thought of myself as special or like a celebrity."

During their whirlwind tour, Commale was even got asked to sign the wall of a restaurant in Taichung.

Commale serves as the spokesperson for Nothing But Nets, a campaign of the United Nations Foundation that raises awareness and funds to combat malaria. Donations toward Nothing But Nets are used to send lifesaving bed nets to protect children from malaria. Over the years, Commale has been credited by the United Nations Foundation for raising $2-3 million for Nothing But Nets; and thanks to the power of the Internet, her story has gone viral. She was the focus of a talk by Taiwanese author Kuang-Tsai Hao, who featured Katherine and her mom, Lynda, in his book, 366 Today. A few days after his talk, she received several hundreds of Instagram requests from fans in Taiwan. That is when she knew her story went global.

"A few days later after all the requests we received an invitation from the Maria Social Welfare Foundation," said Commale.

The Maria Social Welfare Foundation is a service-oriented organization that helps those with physical or mental disabilities in Taiwan live independently, assisting with their everyday needs and education. The foundation includes a school, a home and an early childhood help center. They also launched the HERO Talks series.

During the week, Katherine and her mom had the opportunity to participate in the 2018 HERO Talks event where they addressed roughly 3,000 Taiwanese children, students, and teachers.

"I have never felt so welcomed and loved than I did during our trip in Taiwan," wrote Commale. "It was really powerful to experience such genuine care and kindness from people we had just met. I think the people of Taiwan in general inspired me to be just as kind as they are. When we were touring the Maria Social Welfare Foundation, I had a mother of an autistic child come up to me crying. She thanked me for the work I had done and told me that she wanted her children to be like me. I was absolutely speechless, but now, after reflecting on that moment, I wish I had told her that any child, disability or not has the power to make an impact - small or large. And I think that's the message that I took away most from the trip - that any of the students I met have the ability to bring about a positive impact and change, just as I did when I was a child. That moment with that mother impacted me the most. I now hope to spread that message as much as I can."

Commale first learned about malaria, the deadly mosquito-borne disease that affects millions each year in Africa and around the world, when she was just six years old. She learned, sadly, that malaria, at the time, was killing a child in Africa every 30 seconds (now up to two minutes according to Nothing But Nets website).

"When I saw the PBS program ("Malaria: Fever Wars") I was counting on my fingers and said, 'This is not okay,'" said Commale. "I wanted to do something right after that."

During the program, Commale also learned about a game-changing $10 insecticide-treated bed net that is a very simple lifesaving solution for such a deadly problem, so she and her mom set out to help as many families in need as they possibly could by purchasing bed nets for them. Since that moment of compassion at such a young age, Commale has been working hard to help those in need and raise awareness about malaria.

That first year in 2006, Commale organized a big fundraiser through her church that raised over $10,000 (1,000 bed nets) thanks to the ingenious idea of hand-decorated gift certificates that showed up in stockings and as holiday gifts. That year, more than 600 gift certificates were purchased.

That was only the beginning of their work to raise awareness and to raise funds. By 2011, when Commale was 10, she and her family attended the first-ever Malaria Awareness Day at the White House, addressed more than 10,000 people at the Annual Conference of the United Methodist Church, and participated in the Clinton Global Initiative where she met former President Bill Clinton.

Needless to say, her work has not gone unnoticed. Chelsea Clinton featured Commale in her book, It's Your World: Get Informed, Get Inspired & Get Going! Clinton and Commale had the chance to meet in person at a book-signing event at Children's Book World in Haverford in October 2015.

When asked what she's most proud of, Commale immediately thinks about the headway she and others like her have made in the efforts to defeat malaria.

"I am definitely a number persons and to see that tangible aspect of the cause is really profound," said Commale.