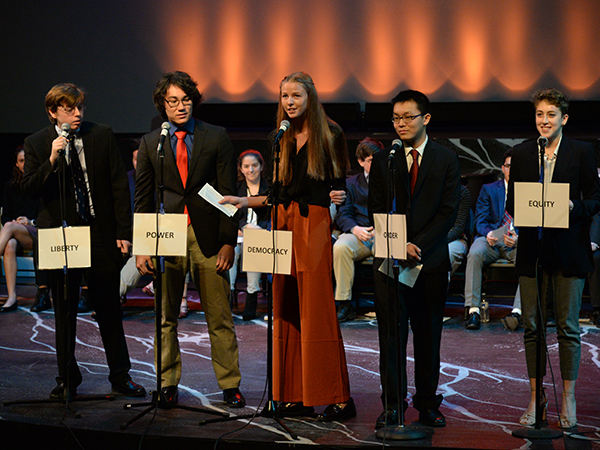 Upper School students did a tremendous job of articulating their points during the annual History Debate Assembly in the Arts Center Auditorium. Under the guidance of Upper School History Department Head Bob Moyer and Middle School/Upper School Library Department Head Mary Fraser, students organized and planned the entire debate during their free time and lunch periods. Throughout the debate, GA students lived the GA mission. They were Confident In Expression, Independent in Thought, Compassionate In Spirit, Collaborative in Action, and Honorable in Deed.

"We had a really amazing group of bright, motivated students who met for about a month during our free times at lunch to brainstorm ideas for an entertaining and thought provoking assembly. The most amazing part of this group of people is that each person wants to be there. They care about the bigger picture of politics and how it will soon affect each of us. Just being apart of a group of incredibly intellectually driven students was the main reason to why I have done it the past two years. The lunchtime meetings allowed me to learn something new each time, but also engage in lively discussions about topics that I would never otherwise get the chance to. It's an incredible experience to be with this group of people." - Kristine Wang '19

"After much debate about what the topic of the debate should be (ironic!), Mr. Moyer made the executive decision to pick the Life Raft debate. From that point forward, we quickly voted on which six ideals we wanted to debate, created teams, and began preparation. We drew from ideological understandings of the various ideals, and then did extensive research on their applications in order to provide real-world examples. After we had crafted opening statements, poignant assertions and rebuttals for the crossfire debates, and closing statements, we began rehearsing. We memorized, reciting our statements to ourselves and each other again and again. I enjoyed how much collaboration this project entailed, and I felt like I became personally close to my fellow team members. Just before the assemblies, our teams met to discuss our plans of action and what we anticipated other teams would use in arguments against us. The camaraderie was a huge part of the experience, and the overall mood was one of friendly competition...We have so much room to be intellectually creative at GA, but the Debate Assembly allows us to go above and beyond. Even when our discourse is largely about a hypothetical issue, as this year's Debate Assembly was, we have the complete freedom to approach our stance in whatever way we choose. I love the opportunity for spirited debate along with some genuine reflection about what values and ideals we hold personally important." - Zoe Torrey '19

"I enjoyed how lively the debate was (especially in the Middle School rendition) and this is an annual experience that I will miss as I head off to college." David Ghalili '19, Co-Moderator

"I didn't participate in the past debate assemblies because I was nervous to speak on stage in front of the entire Upper School. However, this being my final year at GA, I decided to push myself and take advantage of my last chance to be a part of the annual debating magic! I enjoyed being given the opportunity to be creative in getting my point across. There is nothing better than surprising the Upper/Middle school with an unexpected rhyme during a debate!" -Tai Humphrey '19