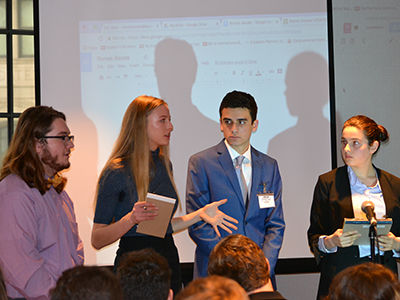 Germantown Academy's Model United Nations club participated in the Boston Invitational Model UN Conference XVII, which took place at Boston Park Plaza in Back Bay from Feb. 9-11. BosMUN is a riveting three-day simulation of the UN hosted by Boston University for high school students around the country. This year's conference featured over 1,500 delegates, 200 staffers, and 30 General Assemblies, Economic and Social Councils, Specialized Agencies, and Crisis Committees.

During the conference, three GA students were honored for their hard work, including Julia Stauber '18, Jamie Werther '19, and Derek Walkush '19.

Stauber was awarded a Verbal Commendation for her work representing the Minister of Culture, Sports, and Tourism on the 2016 South Korea State Council.

"Deciding to join Model UN was one of my best decisions during freshman year of high school," said Stauber. "I thoroughly enjoy the intense preparation, debate and collaboration throughout the entirety of each conference. Most recently at BosMun, as the South Korean Minister of Culture, Sports and Tourism: Cho Yoon-Sun, my committee successfully passed many resolutions to aid South Korea and North Korean relations, which was an exhilarating experience that I will remember for many years to come."

Werther was awarded Honorable Mention for his work representing Denmark on the International Coffee Organization Committee.

"Before the BosMun trip, I had absolutely no knowledge of what a Model UN conference was supposed to look like," said Werther. "My only prior knowledge had been an episode of Parks and Recreation that takes place at Model UN. Mr. Moyer asked me if I wanted to be a part of the trip about a week before the conference after a senior dropped out, and I'm extremely glad I took him up on his offer. Both the people and the event itself were an absolute blast. Along with getting to know the GA Model UN group a whole lot better, I met new friends from all over the east coast that weekend. Every bit of spare time we were all together enjoying each other's company. As for the conference itself, I was pleasantly surprised. Fourteen hours of simulated diplomacy admittedly does not sound like much fun, but the environment really grew on me. In the beginning, I was intimidated, but by the last day, I really felt comfortable in my committee. I highly recommend Model UN to anybody interested or just looking to stay busy next year. The whole weekend was an awesome experience."

Walkush was awarded Best Delegate for his work representing Korea on the OECD (Organization for Economic Cooperation and Development) Committee.

Model UN is an authentic simulation of the UN General Assembly, UN Security Council, or other multilateral body, which introduces students to the world of diplomacy, negotiation, and decision making. Students can step into the shoes of ambassadors of countries that are members of the UN, from Argentina to Zimbabwe. The students, better known as "delegates", debate current issues on the organization's vast agenda. They prepare draft resolutions, plot strategy, negotiate with supporters and adversaries, resolve conflicts, and navigate the UN's rules of procedure – all in the interest of resolving problems that affect the world.

Before playing out their ambassadorial roles in Model UN, students research the particular global problem to be addressed. The problems are drawn from today's headlines. Model UN delegates learn how the international community acts on its concerns about peace and security, human rights, the environment, food and hunger, economic development, and globalization.

Model UN delegates also look closely at the needs, aspirations, and foreign policy of the country they will "represent" at the event. The insights they gain from their exploration of history, geography, mathematics, culture, economics, and science contribute to the authenticity of the simulations once the actual role-playing gets underway, and ensures a lively and memorable experience.