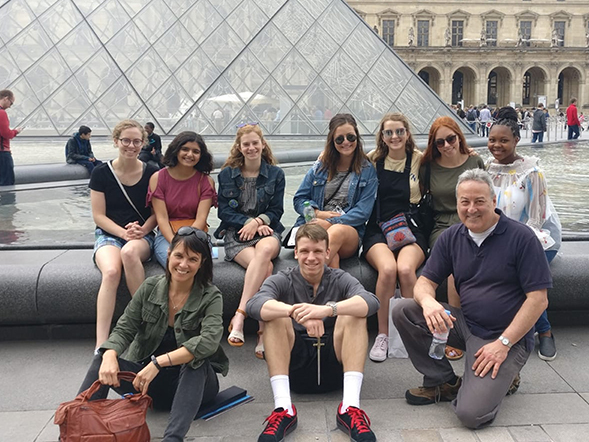 Our ten person contingent of eight students and two chaperones flew into Charles de Gaulle Airport on June 12. We spent two days in Paris, exploring on foot and by metro, and visiting classic Parisian attractions like the Eiffel Tower, the Louvre, and the Champs-Elysees/ Arc de Triomphe. Thanks to Madame [Lyn] Lemaire's familiarity with the city, we were lucky enough to have experiences off the beaten tourist path, including a bistro dinner and walks around the 5th Arrondissement.

After our short but pleasant time in Paris, a train ride brought us across France and over the German border into the welcoming homes of our exchange partners and their families. The next 10 days were spent alternating between attending school at DFG-LFA with our partners and excursions to nearby cities as a GA group. Favorite classes from the week include an English class during which we starred as American practice partners for French and German eighth graders, a history class rife with analysis of political cartoons, and a middle school visual arts course. Our day trips took us to Strasbourg, France (where the European Parliament convenes), Vauban (a village in Freiburg, Germany that has achieved environmental sustainability), Schauinsland (a mountain with views of France, Germany, and Switzerland), and Basel, Switzerland. In Basel, our group crossed a river in a boat that used no motor power, but instead relied upon a tether to a cable over the river and the current to float gently from one bank to another. While most of us marveled briefly at this feat of engineering and then began photographing our surroundings, Dr. [Victor] Montemayor thoughtfully explained the physics involved in the boat's crossing (video attached).

While not all of us fully understood the physics underlying the many sites and scenes we encountered on our trip (another brief physics lesson concerned Foucault's pendulum in the Pantheon), all of us had a good time encountering the language, culture, and people of France, Germany, and Switzerland. Our return on June 27 began with sentimental goodbyes to our exchange partners, and we hope to remain close with our friends across the Atlantic for a long time to come.