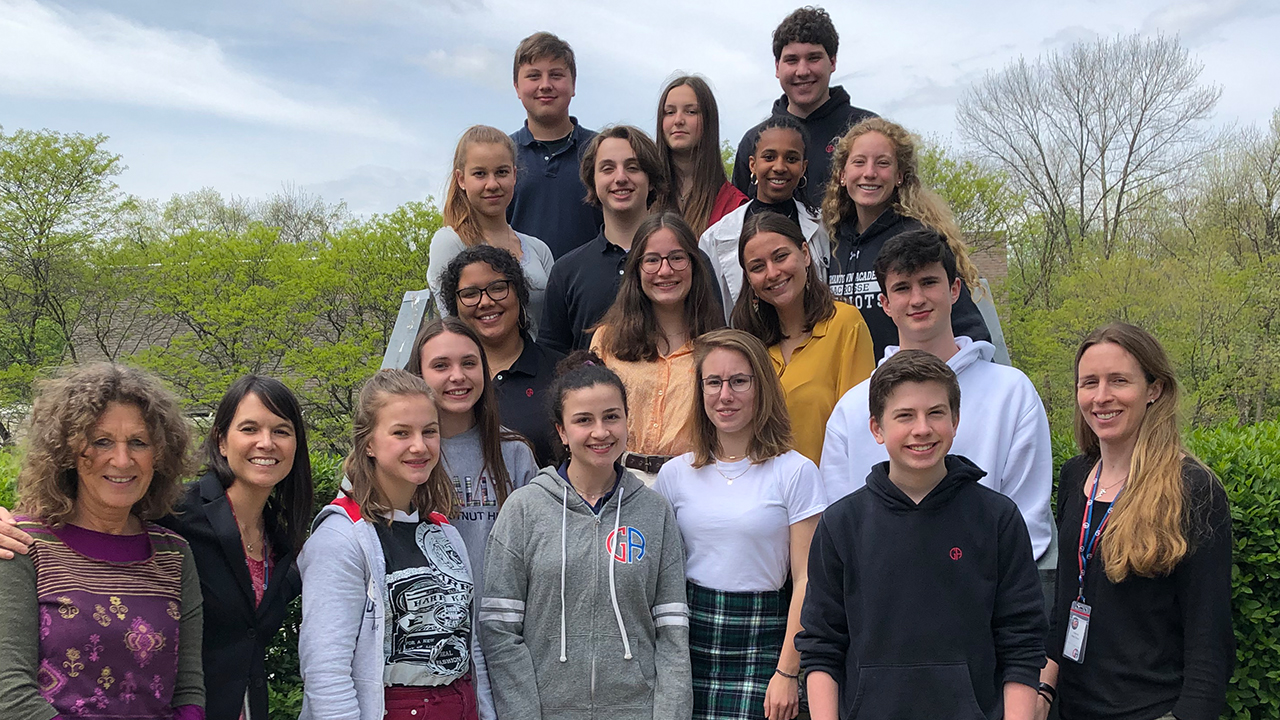 GA Participates in Exchange Program with Franco-German School
May 17, 2019

For the second year in a row, Germantown Academy’s Upper School hosted two teachers and eight students, all in tenth grade, from the Franco-German School in Freiburg, Germany, which is located about 16 miles from the French border. (SEE PHOTOS)

“Some of the families live in France and are French-speaking while others live in Germany and are German-speaking, and many are bilingual and bicultural, with one parent speaking French and the other speaking German,” explained Upper School French Teacher Lyn Lemaire, who has been leading the exchange over the last few years.

Students and teachers arrived on April 18 and departed on May 1. During their time here, they stayed with GA families and were matched with their exchange partners, who will travel to Freiburg in June.

“While here, they spent weekends with their hosts, spent several days at school, which many of them thought was the best part of their experience!” said Mrs. Lemaire. “They love GA and found attending classes to be really fun and interesting! They also went on a day trip into historic areas of Philadelphia, a day trip into Washington, D.C. with Mr. Ferrier, and a day trip to New York City for sightseeing.

A group of eight GA Upper School students will have a similar opportunity this summer when they visit their friends in Freiburg along with Mrs. Lemaire and Upper School English Teacher Michael Ferrier.

“They’ll spend weekends with their hosts, spend some days in school, and have day trips to Strasbourg, France and Basel, Switzerland. We’ll finish up with two days and two nights in Paris," said Mrs. Lemaire. “This is our second year for the exchange. Their visit went really well, and we are excited to see everyone in Germany six weeks from now!"

GA Upper School students have the opportunity to participate in exchange programs and opportunities abroad throughout the school year and summer, including opportunities in Beiijing, China, Krakow, Poland, London, England, Seville, Spain, and the Franco-German trip, which takes students to Germany, France, and Switzerland.

“Personally, I think that intercultural experiences are absolutely key not only to understanding other ways of living and thinking, but also to understanding our own culture and country and our place in the world,” said Mrs. Lemaire. “Just seeing how people live in another country, what’s important to them, what’s different and what we have in common, and getting their perspective on our own way of living, can be a huge eye-opener, a humbling, enlightening and inspiring experience. And of course, there’s the language piece as well. For our French students, the opportunity to live with a family where they are completely immersed in the language they've been studying for several years really gives them a boost towards fluency; and for those who stay with German families, they get a nice head start on Mr. Schellhas’ German elective. The unique part of our exchange is that no matter what language they are studying at GA, they get exposure to both French and German on the trip, and get to see both of those cultures intermingle and contrast with each other in the bilingual environment of our partner school.”