Share to FacebookShare to TwitterShare to LinkedInShare to PinterestShare to EmailPrint this page
GA Engineering is Going to Nationals!
May 15, 2017

They researched, they tinkered, they tested, they documented, they tweaked, and just when they thought they had the perfect solution, they researched, tinkered, tested, documented, and tweaked some more. Such was the life of Germantown Academy’s Engineering (Honors) students this past school year, who genuinely enjoyed preparing for various competitions throughout the school year while learning the complicated components of engineering. All of their hard work paid off in the end, though, as they were able to rise to the occasion and earn some notable hardware for GA.

At the Greater Philadelphia SeaPerch Challenge, hosted by Temple University, the GA SeaRaptor Team, made up of Zander Foglia '17, Frank Koons '17, Finn Lillis '18 (teatherman), Mike Peters '17, Chris Purcell '17, and Edward Wiernicki '17 (pilot), was named the Overall Winner for their excellent design of a remotely operated vehicle (ROV) that was fully capable of efficiently completing various tasks and obstacle courses underwater. In fact, of the more than 30 high schools in attendance, GA’s ROV was the only one to complete the new pipeline challenge within the allotted time! In addition to winning the Overall Winner Award/American Society of Naval Engineers Navy Contract Award, GA’s squad also took first in the pool performance category, finished second in the engineering design notebook category, and sixth in the presentation category. WATCH THE HIGHLIGHTS! 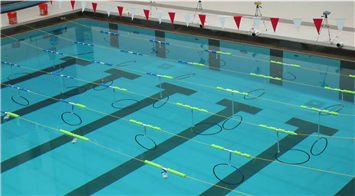 GA’s SeaPerch team qualified for the National SeaPerch Challenge, which will take place on May 19-20 at Georgia Tech in Atlanta, Georgia! The SeaRaptor Team bound for Nationals, which is a little different than the original squad due to the timing of the event, consists of seven unique members, including co-advisors for the various GA teams Diane Goldstein, who leads the Engineering (H) class and also teaches Upper School physics, and Mike Kelly, GA’s all-star electrician, both of whom are terrific mentors and motivators for GA students, who designed, built, and operated the ROV.

“Wiernicki is the head mechanic and an electrical engineer, but most importantly is the pilot behind the remote,” explained Kelly. “Zander is also the team mechanical engineer and an electrical engineer, as well as the teatherman. Chris is the leader of the obstacle course construction group, and Frank Koons is our project manager who makes sure everything is running smoothly. Finally, Kelsey Popolizio ('17), as the project coordinator and team photographer, is responsible for the final edit of SeaRaptor engineer’s notebook. The team knows that understanding the needs of the project, brainstorming, prototyping, testing, combined with practice and patience will create a successful project.” 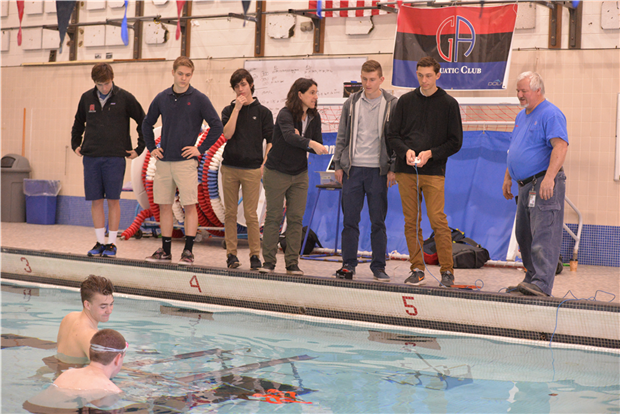 “It's a lot of fun—everyone that takes engineering has a lot of fun,” said Wiernicki, who explained that his group was first issued a kit made up of PVC piping and given a basic design, but from there they were free to make modifications and add other components, as long as the team stayed within a $20 budget. “We bought a flashlight for a few dollars, as well as 3D printed several motor mounts, and that was within our budget.”

The class was divided into two SeaPerch teams and once their final designs were ironed out, they held time trials in the GA pool to see which one did the best. But, the class and project were so much more than just building a fast, manueverable robot. For all their projects, they had to consider the business side of construction, properly document their project, and give a thorough presentation. 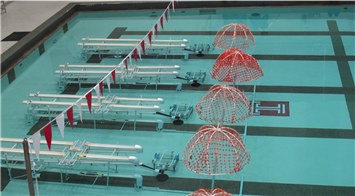 “We had to submit a three megabyte digital notebook with all the research behind the robot, calculations for buoyancy, the motors—everything we did behind it had to be documented daily and submitted,” said Wiernicki, who enjoys the hands-on learning facet of the class and hopes to study engineering in college. “Another part of the project is the presentation. We had to get in front of a board of Naval engineers—that and plus the build and actual competition in the water is how they score you in the end.”

The competition included a tricky obstacle course the ROVs had to maneuver and then the pipeline challenge where they had to fix a mock pipeline. 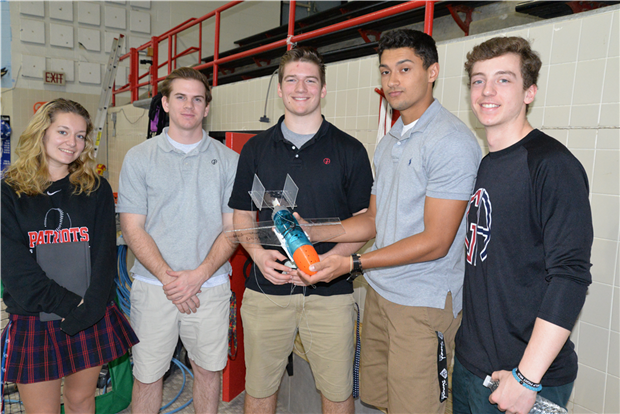 GA engineering students also competed in the SeaGlide Competition at Temple University. A SeaGlide is a miniature underwater glider that moves by changing its buoyancy, taking in or expelling water. This change in buoyancy causes the glider to rise and sink in the water. As the glider travels up and down, its wings generate lift, which propels the glider forward. Full-scale underwater gliders deploy for months at a time to collect valuable data about the world’s oceans. SeaGlide can't run for months at a time, but it can collect temperature and pressure data as it flies through the water.

The 2017 competition consisted of a SeaGlide race which required GA students to create an autonomous underwater vehicle which could dive and surface through a simple course, a short paper describing SeaGlide, an application of an appropriate sensor for data collection, and the design and measurement challenges associated with the use of the sensor. Finally, each team had to create a two-minute video commercial about their SeaGlide and show this to a panel of judges, as well as be prepared for a five minute question-and-answer session following the video.

Representing GA at the SeaGlide competition were Popolizio '17, Tanner Long '18, Mike Patterson '17, Andrew Towne '17, and Ben Werkheiser '17. Both Popolizio and Patterson attended a two-day build and training seminar prior to the competition.

“Besides making it, we learned about the engine and the way it works,” said Popolizio. “It basically moves like a dolphin.”

“It oscillates back and forth,” added Patterson. “We pretty much put the whole thing together and made the buoyancy engine that makes it oscillate through the water. The idea behind it is that a bigger model will be able to search the ocean and scan for crashed plans, and you can equip cameras and sonars to it and it will run for you in an easy way.”

Both enjoyed the project and the class overall and are hoping to pursue a career in engineering.

“It’s pretty cool to look at the project for what it was at the beginning,” noted Patterson. “You didn't think you'd be able to put together this complex piece of equipment, but we went through it step by step and that made it pretty fun to do and now we're seeing the results. It's a hands-on experience. Every day you're building something new. This SeaGlide competition is a lot of trial and error so we get to design things on the 3D printer, laser cut different wing designs, solder different components, and come down here to the pool and test it out so it definitely makes the class really interesting."

“I really like how the SeaGlide is already being used,” said Popolizio. “I know Rutger’s built one and it already went across the Atlantic Ocean. I like how there's real life application with it.” 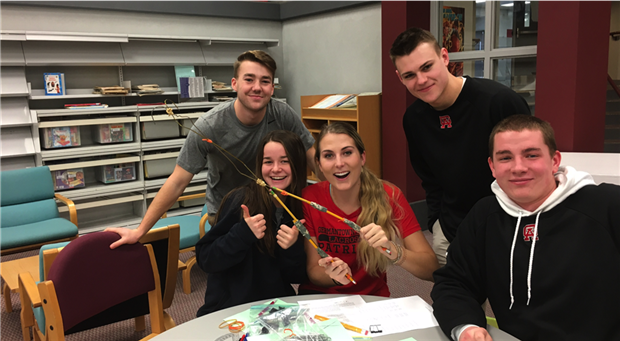 GA also fared well in Technology Students Associations’ TEAMS (Tests of Engineering, Aptitude, Mathematics, and Science) competition. The Patriots finished 22nd out of 74 teams in Pennsylvania and also qualified for Nationals! GA’s TSA team included Koons, Isabel DeWalt '17, Luke Dion '17, Gaven Giampalmi '17, and Emma Robinson '18. The competition was broken up into three sections: an in-depth essay, a multiple-choice exam, and a design/build competition. For the exam, teams had 90 minutes to solve 80 multiple choice questions focused on eight engineering scenarios related to this year’s theme, which was “Engineering the Environment.” For the design portion of the contest, teams had 75 minutes to complete a hands-on challenge related to theme, but they could only use designated materials. 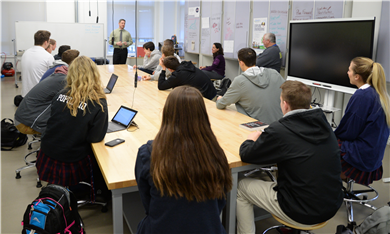 “Forty percent of the project was the price of it,” explained DeWalt, who plans to study computer science at Lehigh University in the fall. “Each material was a certain price (ex. a pencil was $5). For the challenge, we had to see how cheap we could make it; a lot of other teams used a lot of cardboard, which was very expensive.”

“We were assigned to bring various materials ranging from strips of cardboard to pencils and duct tape,” added Giampalmi. “Using those materials, we had to build a two foot mechanical arm that would lift a water bottle up in the air and move it over a foot horizontally and then drop it on a table in the designated area. We did complete that task although our solution didn't look the best, but we thought it was funny because we were one of the only teams to complete the project.”

“I think this class is very different from others,” continued Giampalmi. “In this class we use a lot of designing thinking. We go through a 12-step design process, starting from brainstorming to prototyping to developing a final product and what is interesting about this class is that every single time we're working on a project our team is essentially its own business and that's how we think and how we make decisions. I think that's really interesting and something we don't do in other classes.”

“Every class is very hands-on,” said Dewalt. “It’s always us working through a problem. It’s very different from the rest of the day.”

Earlier in the school year, the team of Wiernicki, Peters, and Dion placed seventh overall out of 77 teams at the Widener Mousetrap Competition. 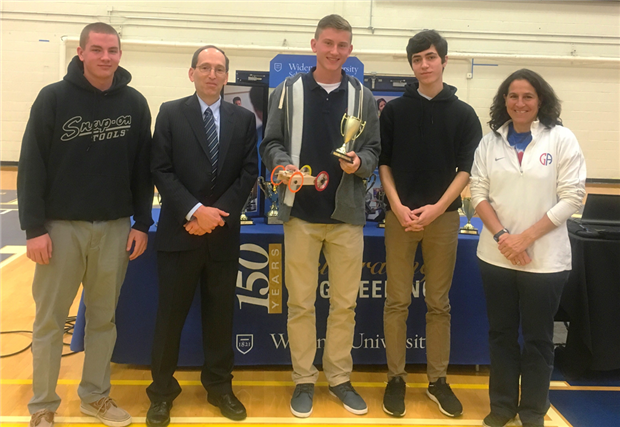 “We break up into random teams every competition,” noted Robinson. “We also did a rocket unit so we learned about rockets nomenclature and then we divided into groups, designed, and built model rockets, determined the rocket’s center of gravity, center of pressure, maximum predicted altitude and finally launched them.”

“When I decided to frame the course around several outside of school engineering competitions, I was not sure how the class or myself would hold up,” said Goldstein. “Although I was a college engineering cooperative student, I wished that I had joined some of the academic engineering teams during my college years. I had always felt that was where so much of the ‘true’ learning was happening at school. I know that the students and I have some amazing highs and lows that only come from working with a group trying to achieve a common far-reaching goal.

“Teaching this course has allowed me to really appreciate the resources that we have at our fingertips here at GA,” continued Goldstein. “Including the MakerSpace with the 3D printer, laser cutter, and its many tools, the pool for testing, and the Beard Center for Innovation for overflow collaboration. Additionally, I would not have been nearly as successful in this course without the support of my colleagues, especially Steve Herman, Mike Kelly, Mary Fraser, retired GA teacher Ken Ford, Gabby Russomagno, Paul Moffet, and Jamie Anderson. They all pitched in during different projects to help the students achieve the successes and memories of Engineering (H) 2017!" 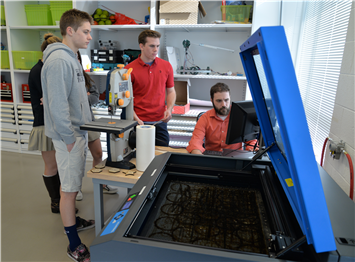 Throughout the year, Upper School Computer Science teacher and Systems Administrator Steve Herman, who also serves as the manager of the BCI, has been a hidden hero and a master of creativity for the class as he provided insight and assistance with machinery, including the 3D printer and laser cutter, inside GA’s makerspace.