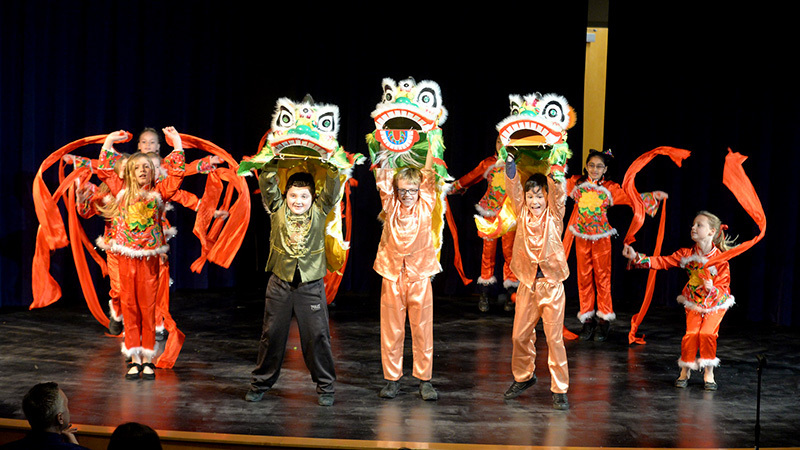 Happy Year of the Dog!

On Saturday, February 24, nearly 300 members and friends of the Germantown Academy community gathered to celebrate the Chinese New Year and Spring Festival for the 8th consecutive year. The biggest party of the year for GA's Chinese Programs, the event featured a variety of stage performances, cultural activities, and a delicious buffet lunch. Multiple generations of families rang in the Year of the Dog together.

See Photos and Videos on SmugMug

The performances began with a bang, as special guests Penn Lions wowed the crowd with an acrobatic and engaging lion dance. The student troupe from the University of Pennsylvania played with the crowd as they danced down the aisles to rhythmic music, then gave a history of the lion dance and performed the story of the lion and the poisonous spider. The group was a big hit and brought a lot of energy to the room.

Next, the GA Lower School students, led by Chinese Curriculum Coordinator Bertina Hsu-Miller, demonstrated Chinese Jump Rope, which involves stretching an elastic band around the legs of two anchor students while a third jumps on and in between the outstretched band. The children chant a combination of numbers and take turns jumping in patterns.

The Middle and Upper School Chinese classes recorded videos during the week leading up to the celebration to show what they do in the classroom. The 6th and 7th Grade classes, led by Jarrett Anderson, practiced their vocabulary using the "Big Wind Blows" game, and told a story they made up about "Invisible Jerry and Rebecca." The 8th Grade class, led by visiting teacher Sue Yang, acted out "DingDing's Story," about a child who meets a fairy and has to put out a fire to save the animals of his mountain.

The Chinese 1 class made a stylish and funny performance video of Chinese Rap, where three students introduced themselves and talked about their families and what they like to do. Chinese 2 also displayed their musical skills, singing the classic song, "I'm Sorry, My Chinese is Not That Good."

After the videos, the live performances continued with the After School Class, led by Vivien Zheng. Five students who meet and practice Mandarin twice a week acted out the story of "The Blind Men and the Elephant," which teaches the important lesson that we must not judge something based on a single part, but must know the whole story to come to a conclusion.

Master Matt Xichuan Zhang then led his students through a demonstration of Tai Chi Gong, who did a great job moving gracefully through the steps they have learned during their Saturday morning classes. Master Zhang also gave a spirited display of wushu martial arts.

The Lower School students took the stage again to close out the show with a snappy version of the Ribbon Dance, choreographed by Lin Zhou. Three lions were surrounded by seven ribbon twirlers in energetic dancing. It was the perfect way to close out one of the best performances ever at GA's Chinese New Year celebration.

All the proud parents and family members then gathered for a delicious meal of handmade dumplings, noodles, rice, fish, chicken, oranges and cake.

After lunch, children enjoyed cultural activities like calligraphy, origami, and a chopstick challenge. Each child also received a gift bag with the traditional red envelope and coin to wish them a happy and healthy new year.

Thank you to all of the parent volunteers, family members, teachers, and students for an absolutely fabulous new year and spring festival celebration. May you have a successful, healthy, and happy new year!