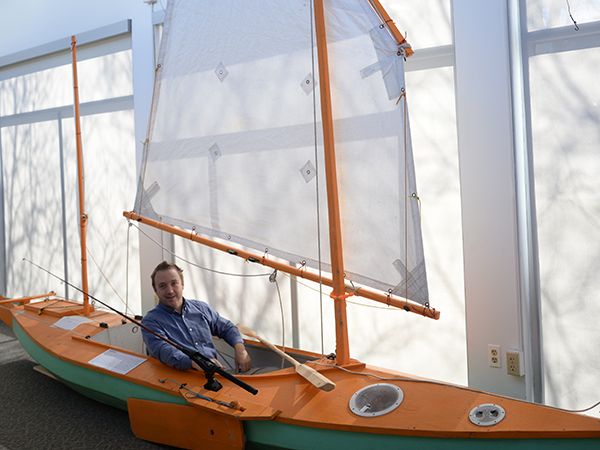 Germantown Academy's Technical Theatre Director and Production Manager Paul Moffitt is in his element when he has the opportunity to work with his hands. It's an aspect of his life that has led him to both the world of technical theatre and to building boats. While Moffitt's passion for technical theatre is on display all school year long, his love of boat building is on display just this month (Oct. 3- 31) in the Arts Center Gallery in an exhibit entitled "Messabout."

"Messabout is a generic term for any time people who build boats get together in boats anywhere," explained Moffitt. "That term comes from a quote from The Wind in the Willows."

Moffitt, who is in his second year here at GA, kicked off last year by sponsoring The Boat Who Wouldn't Float by Farley Mowat for the Upper School Summer Reading Day. He brought in one of his boats to show students how it worked and Upper School Visual Arts Teacher Sara Krupnick-Ritz took notice.

"Sara saw the boat and asked if I built it," said Moffitt. "She was fascinated and said she wanted to see my boats in the gallery. She talked me into it and I'm glad I did it."

Within the gallery are a number of boats, including a Rob Roy sailing canoe named Paul's Boat, which was designed by well-known boat guru Jim Michalak.

"I wanted an expedition sailing canoe that could get into really skinny green waters and could handle some waves," said Moffitt, whose boats are all traditionally rigged. "This means they are rigs found 300 years ago in the Mediterranean. That is important to me. The rigs are very easy and fast to set up and very simple."

For Moffitt, his boats are about practicality so he can easily get in and out of the water and go exploring.

"Mine are meant to be tools," said Moffitt, who enjoys exploring the waters in the Delmarva Peninsula and along the Outer Banks of North Carolina and Texas. "They are my backpacks so I can explore."

So how does one get into the fascinating world of boat making?

"I was always building stuff with my father," explained Moffitt. "When I went to college, my father built his first sailboat and he got into sailing boats. When I finished college I decided to build a kayak. My first summer off I had a job at a sandwich shop and I had some extra time and a couple of tools and I built my first boat. It's actually surprisingly cheap to build a boat; you really just need a basic understanding of a couple of tools and a desire to do it. The first time that I sailed to an island with the boat that I built and with the sails that I sewed and everything I reaped myself, and I got to that island and stood on it I was totally hooked. It was something real that I actually accomplished and I got to some place totally on my own. Half of the joy of boats for me is building it and coming up with interesting solutions."

Moffitt's vast experience in technical theatre has helped him navigate the complicated boat designs that he has attempted to build in the past.

"Being a theatre designer, I make blueprints, I read blueprints and I know all the tools," said Moffitt. "And when you're in theatre, you have to think outside the box and be able to build something out of nothing."

Moffitt graduated from The University of North Carolina at Greensboro with a Bachelor of Fine Arts in technical theatre in 2000. Following his college career, he had a number of lighting jobs, but was really hoping to become a show designer. At the same time, he started to build sets on the side to make extra money and eventually was hired by Swarthmore College, Pig Iron Theatre Company, and a number of other local companies as a technical director, which opened the door to a number of show designer jobs. And at every stop along the way, Moffitt picked up a new skill.

"Anything you can do with your hands I want to learn," said Moffitt. "I worked for the Fringe Festival for about ten years and we would literally walk into a space that was an old warehouse and had no power and we had to turn it into a Licenses and Inspections approved theater. So you go in there with absolutely nothing and you have to run the electricity, the power, build the set, build the audience risers, get it all to work and get it approved by Licenses and Inspections, and after you've done that 50 times you better be a good carpenter and you better know how to weld and you better know how to do electricity."

And that passion for building and constructing and technical theater is why Moffitt is excited to teach here at GA.

"I really enjoy being able to open students' minds to the possibilities out there regarding theatre and a possible career in it," said Moffitt.