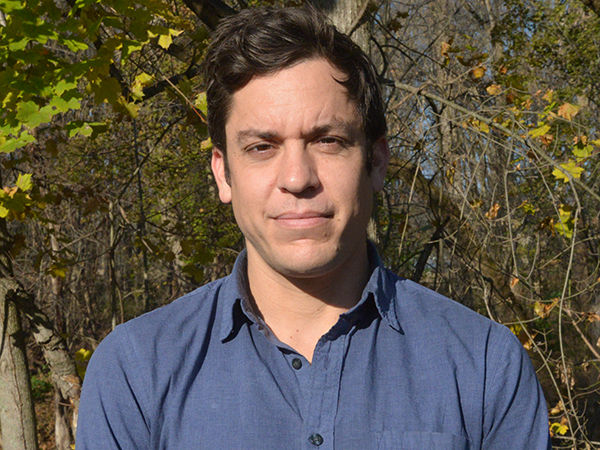 "A camera and an idea can get you around the world."

As first-year Upper School Photography Teacher Nicholas Wynia puts it, a camera has opened many doors for him over the years—doors that are normally closed to the outside world. From sleeping shoulder to shoulder under the stars on a fishing boat in Nicaragua to driving all over the United States and Canada to document outdoor hockey to teaching in Italy, Wynia has opened the doors into the lives of people all over the world through his work.

"A camera and an idea can get you around the world," said Wynia, whose work has taken him to Canada, Ecuador, Honduras, Italy, Mexico, Nicaragua, Panama, and Peru. "When you have a camera, people are more willing to let you into their wonderful little world."

The GA community has been enjoying Wynia's work in an exhibit in the Arts Center entitled "Story City," which will run until Friday, December 15. Wynia's show, named after his hometown in Iowa, is an extraordinary exhibit of documentary photography and video that captures authentic snapshots of individual encounters.

"I hope that people find a bit of mystery in the photographs and look at them individually," said Wynia, "I hope they find them aesthetically pleasing and want to ask more questions because these pieces of work are a window into what these different lives look like. I hope students think bigger than GA, bigger than their environment. I hope they think about places they want to explore and how they can bring those stories back here."

Wynia's exhibit is made up of four different bodies of work, including a few shots from his book, Pond Hockey, projects he completed while having surgery in Estonia, photographs from his time living and working abroad in Italy, and portraits as well as a documentary from his time in Latin America.

"I think I'm most proud of The Middle Man piece," noted Wynia, who was working on one project in Nicaragua before he met a fishmonger named Alvaro Ayala who sparked his interest enough for him to return to Nicaragua
and make a short documentary. (WATCH THE MIDDLE MAN)

"I think about that experience of spending two weeks with this guy and trying to figure him out and do his words and his attitude justice," added Wynia. "A part of my work is the experience of doing the work—the photographs and videos are what is left over from that experience...Photography is about introducing yourself to somebody or trying something different—all that is part of being a photographer, more so than having the best equipment and knowing how it works."

Over the years, Wynia has worked for a number of publications, including Vice, The Wall Street Journal, Northland Films, The Daily Iowan, and Press Citizen, as well as many other companies and organizations.

"I work both ways," said Wynia. "I've done a number of freelance projects on commission from Vice News to The Weather Channel to whoever needed work. At the same time, I like to have my own work going on. All the work I did in Nicaragua was researched and self-funded."

In addition to his commissioned and self-funded work, Wynia was also named a Fulbright Scholar, which allowed him to create a photographic essay and exhibition through research of religion and history in Lima, Peru.

"It's a mix," said Wynia. "[Photography/filmmaking] is a way for me to make a living and to do what I want...If you really love what you're doing you have to figure out the other piece"

As a teacher here at GA, Wynia is not only looking to pass along his technical skills, but to instill a level of self-reliance in GA student artists and for them to "trust their own ideas."

"I think the biggest reward is when students are interested in a project they are doing," said Wynia. "It's not just that they are doing this because I gave them an assignment. When they come up with their own assignments or project and are excited about that—that's what gets me excited. I want them to have more confidence and see the possibilities and to be self-motivated."