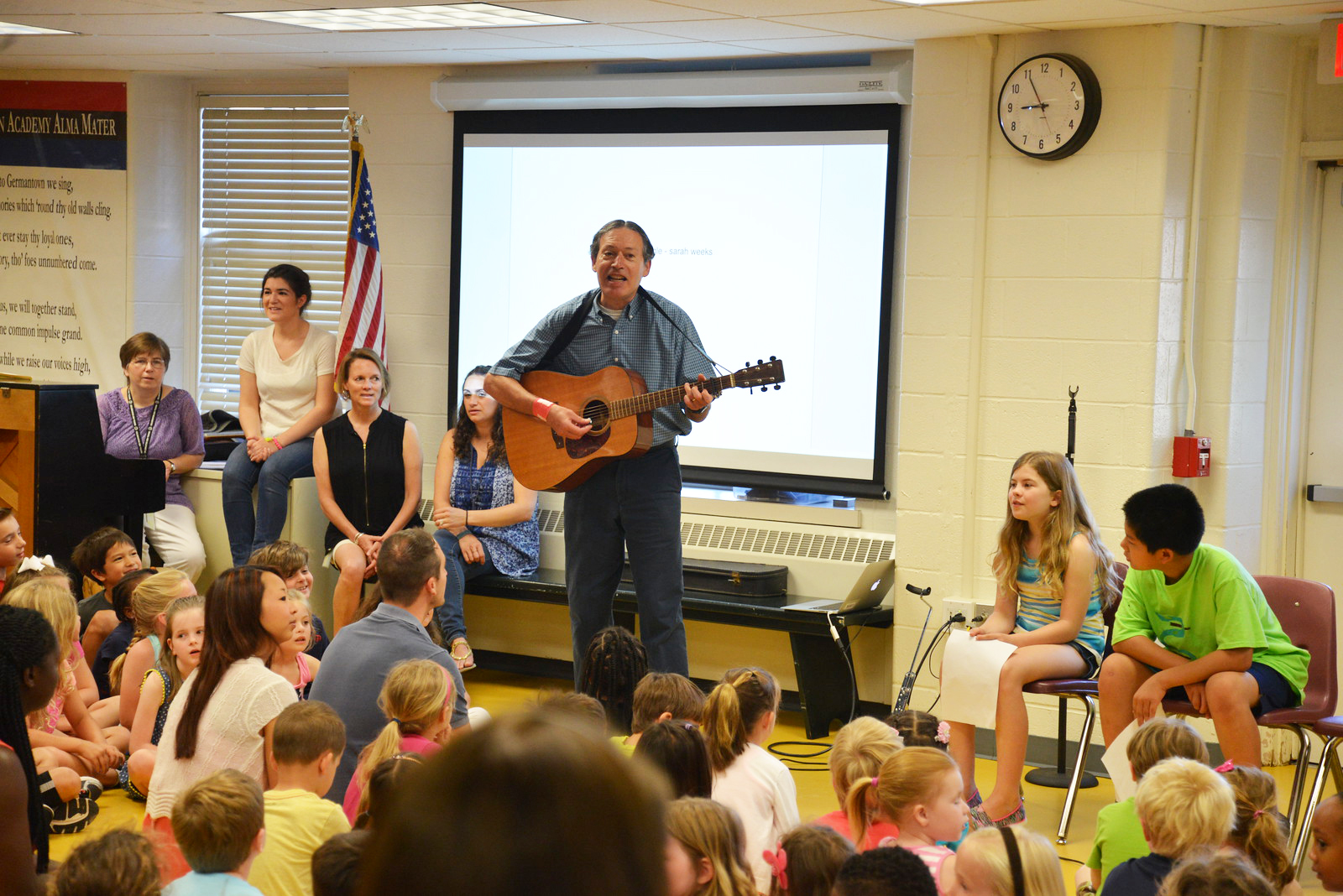 Is he the Music Man who teaches science, or the science teacher who creates music? It is one and the same when it comes to the Lower School’s Craig Newberger 1760. Whether it’s making Claymation movies about dinosaurs, exploring rocks, minerals, and geologic processes in the Wissahickon Gorge, watching the stars via telescope, or singing his trademark song, “Proud to Be A Moose,” (which is about being proud of who you are), for 34 years Newberger’s students were encouraged to find themselves through scientific and musical discovery. This June, our singing outdoorsman will hang up his guitar and put away his water shoes as he retires from Germantown Academy.

“Has there ever been a more inquisitive, knowledge-searching, nature-loving, musically-talented human than Craig Newberger?,” said Head of School Rich Schellhas 1760. “Craig’s genuine interests and talents are expansive––he is the type of man who could have taught anything at any level, and he chose Lower School science at GA. Lucky us! Decades of GA students have more than benefited from his choice. Every lesson with Mr. Newberger features an air of exploration, discovery, illumination, and fun. He’s serious about the fun because he has always wanted, needed, for students to see in science and nature what he does––wonder at every turn. Craig’s student trips around the globe have always been as eye-opening for the parent chaperones as they have been for the participating students. But it makes no difference if he’s wading in the Wissahickon or trekking in a distant rain forest; Craig’s brilliant, childlike joy at discovery and in sharing that discovery with others is perfectly palpable and refreshingly real. He is extraordinary, every day, in every place.”

Throughout his career, Newberger worked at various schools, camps, nature centers, environmental education centers, and museums. But GA, where he started in September 1985, has been his longest adventure.

“When I took the job, I expected I would stay for a couple of years,” said Newberger. “I never expected to be here for most of my career. Over time, GA has become my second home. I have received wonderful support from administrators and parents, and I love working with the students. GA has given me the opportunity to combine all my talents to create the best possible educational outcomes for students.” 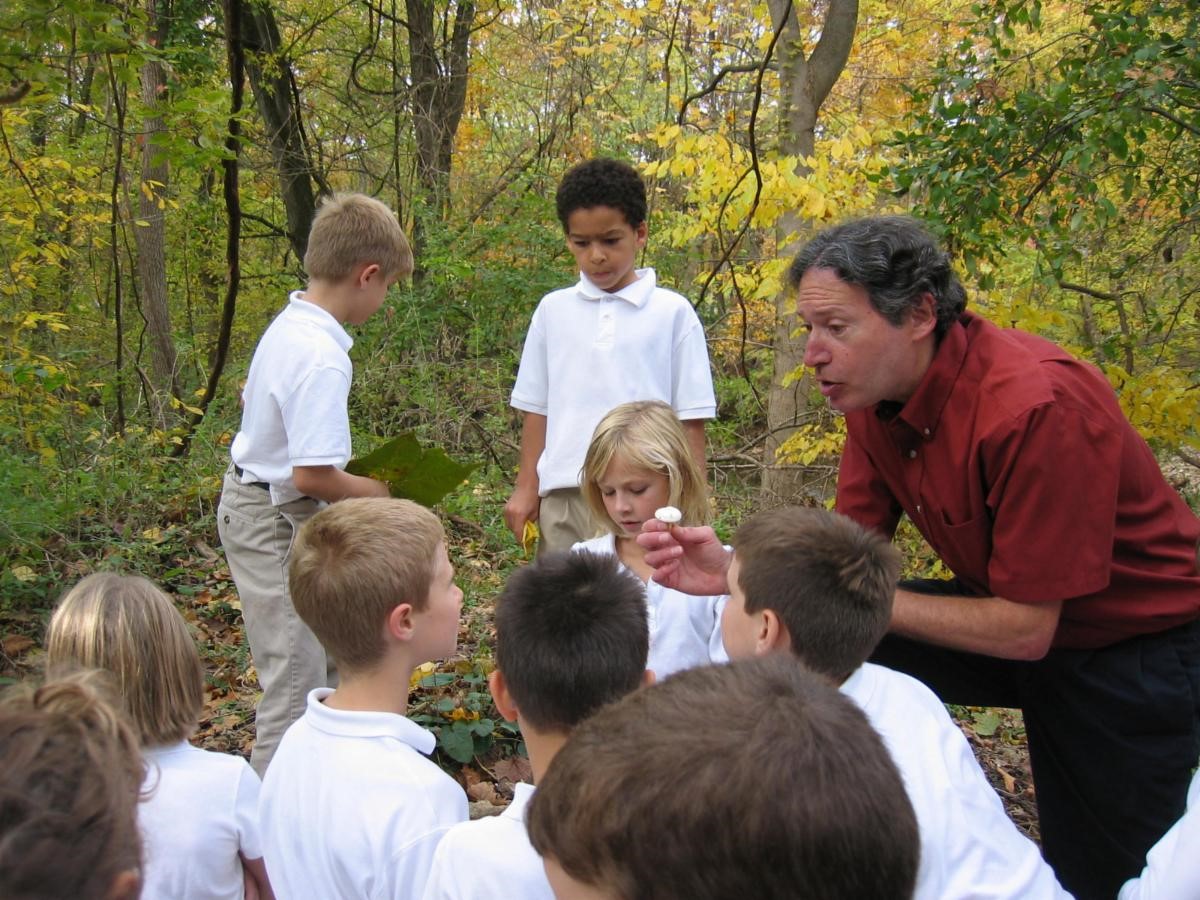 And Newberger indeed shared all of his talents with his students.

Recognizing the value of offering more hands-on experiences in the teaching of science, he created summer programs in the 1990s with the creation of Design Technology weeks for elementary students. Once well established, he turned to the need for increased opportunities for young women in science and created the Girls Summer Science Institute. Wildlife Discovery Camps became his focus in 2003 as he sought to make direct connections between the natural world and students by immersing them in a variety of ecosystems. Campers involved with these trips could be found spending their days, and sometimes nights, in such places as Cape Cod, the Poconos, the Berkshires, Sedge Island in New Jersey, and a variety of natural areas in the Delaware Valley.

In 2003, Newberger began taking Middle School students and their parents to Costa Rica every other year during spring break.

“After learning about the rain forest in fifth grade, I wanted students to have the opportunity to experience this unique environment firsthand,” added Newberger. “Over eight days, we traveled from coast to coast with a native Costa Rican guide, saw lots of amazing wildlife, and learned about the ecology and culture of this amazing country.”

Newberger also shared his musical talents with his students during assemblies, where his goal was to build a sense of community. For decades, students would use their hands to create antlers on their heads and sing the Moose song’s chorus. Some of his other favorites included “Waltzing with Bears,” “The Library Song,” and “The Marvelous Toy.” In class, he often used music to teach science concepts with the songs, “The Rock and Roll of Photosynthesis,” “All the Rivers Run,” “It’s an Amphibian,” and “The Water Cycle Song.”

Whether Newberger the singer or Newberger the scientist, Newberger the person is a valued teacher. He is a two-time recipient of GA’s Distinguished Teaching Award, attained Level 4 Teacher certification, received the Mission Award, was awarded membership in the Class of 1760, and was named the inaugural Diane Goldstein Endowed Chair for the Teaching of Science. But when asked what his proudest accomplishment is, the answer always comes back to the students.

“Over the years, I’ve heard from many GA graduates who pursued careers in science,” said Newberger. “These students wanted me to know that their interest in science began when they were in my classes in the Lower School. I have also heard from other graduates who say they are sharing memories from Lower School science with their own children. Some are taking their own children on creek explorations, while others enthusiastically support children’s science projects, and it seems many are passing along the songs they heard in the classroom.”

And there’s no doubt–Newberger’s thousands of students over the years and the entire GA community are more than thankful for him. 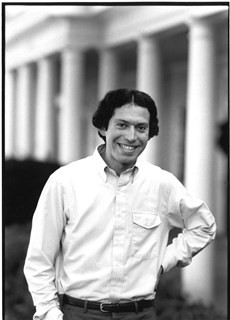 What were some of your favorite projects/units over the years, and why?
I have particularly enjoyed projects that involved exploring the outdoors. This includes keying out trees, surveying the insects found on campus, exploring the creek, and looking at the wildflowers that grow in our woods. Every year, I took all my classes to the creek. We did tests to examine the water chemistry and the physical properties of the creek, and we searched the creek for animal life. We collected data and compared it to data that we collected in previous years.

What you will miss most about GA?
I will miss all the people that have touched my life during the past 34 years including students, parents, faculty, administrators, maintenance staff, cleaners, the business office, the nursing staff, the development office, and the admissions office. There are so many wonderful people that make GA what it is, and I feel lucky to have connected with so many of them.

Memorable quote that inspired you as a teacher?
“The world will never starve for wonders, but only for want of wonder.”
-G.K. Chesterson

“We travel together, passengers on a tiny spaceship, dependent on its vulnerable resources of air and soil,  all committed to its security and peace, preserved from annihilation only by the work, the care, and I will say, the love we give our fragile craft.”- Adlai Stevenson

What GA traditions will you miss the most?
I have always enjoyed our opening assembly, when we first get together as a Lower School community.  I’ve enjoyed contributing to this assembly with my songs.  I feel the same way about our closing assembly when each grade level gets to share something significant from their school year. Field Day is another favorite of mine during which I helped run the obstacle course for more than 30 years.

When school was out, Craig didn't take a break!
Since 1985, I’ve worked at the National Audubon Camp in Maine during the summer. For seventeen years, I directed a ten-day youth ecology camp (first for one session and later for two sessions). Eventually a Family Camp week was added.  The camp, located on a beautiful island in mid-coast Maine, focuses on environmental stewardship. Campers explore a wide variety of habitats including forests, fields, freshwater habitats, and the marine environments along the coast.  Many GA students and their families have been able to take advantage of these remarkable weeks, learning about ecosystems and our impact upon them.  Most recently in 2011 I returned as an instructor for the educator's camp which was comprised of teachers from a variety of states wishing to learn interpretive techniques.