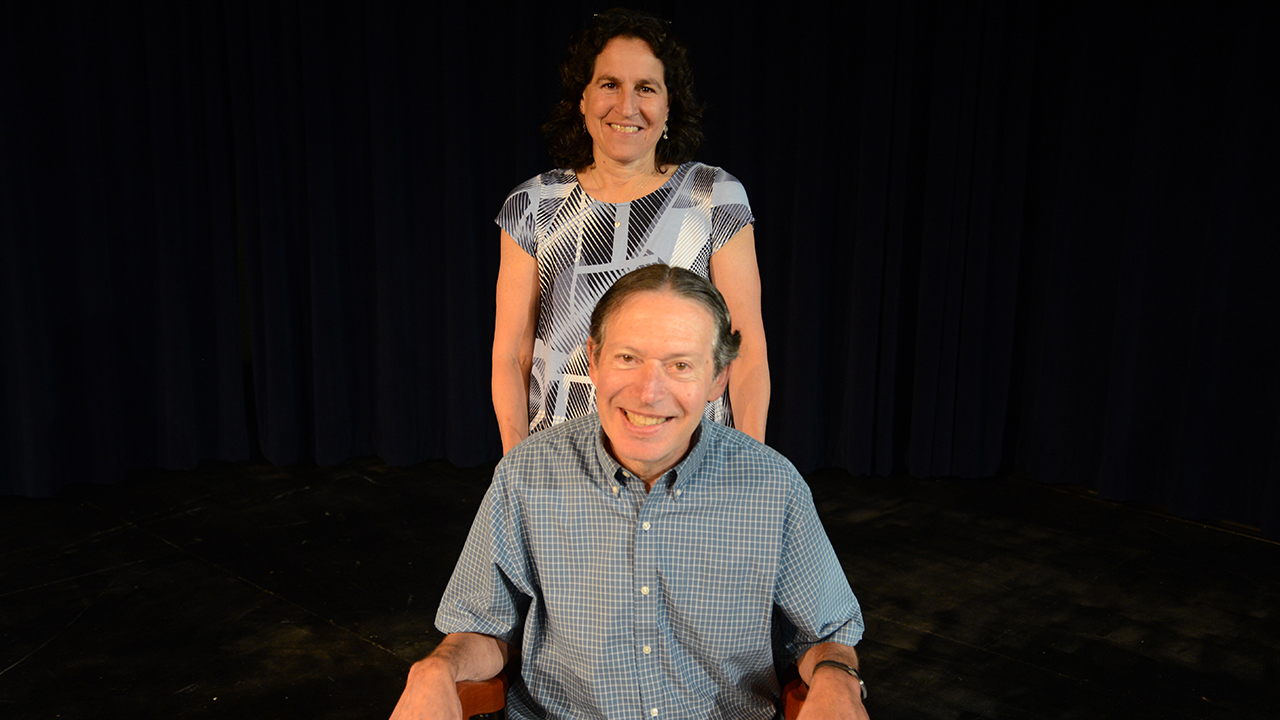 Craig Newberger 1760 Named The Diane Goldstein 1760 Chair for Excellence in the Teaching of Science
June 20, 2019

Goldstein presented Newberger with the award:

"This year, I found myself unexpectedly in the Lower School, asked to answer questions as part of a second grade class project called Genius Hour. I felt giddy about the idea of being someone’s genius. This girl was interested in rockets, and I was all in.

"As luck would have it, when I came back to launch rockets with her class, I was able to observe Craig Newberger in his natural habitat across the hall. He walked briskly by me with determination into his science classroom with two students to the corner aquarium. The students watched excitedly as Craig plopped a large frog into the water.

“I saved a frog once that was in a pool, I knew he couldn’t live in chlorine.”

“That’s great, and I am so glad you saved this frog from under a car.”

“What are the two of you doing at 1:40 today? That’s when I want to return the frog to the creek.”

“Great, see you then.” And Craig whisks off to another adventure. Such is the day in the life of a Super Scientist – saving small minds and frogs at every turn.

"I first worked with Craig when he showed me how to run the GA Legos and K’NEX Inventors Summer Camp over 15 years ago. I walked into his science classroom and just kept looking. Like all of his students, I am sure, up, down and all around. There was organized stuff everywhere. Biology, chemistry, physics – all here. The one small piece of information that I withheld was that I had never played with Legos, and I had never connected a K’NEX. But I wasn’t worried as I had just been trained from the master of science education for kids!

"It’s hard not to treat this speech as a list of sorts – as Craig has done so much! But that would be unfair to Craig, as both he and we know that it is not how much you do, but how you do it. 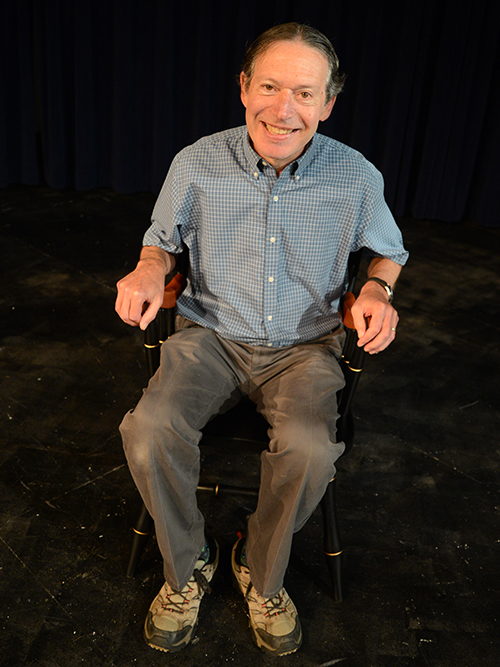 "Growing up, I remember digging in the dirt and Matchbox cars and worms and bees. But I don’t remember a Craig – an adult introducing me to our physical world and trying to explain how it worked. Craig has talked to more students individually at this school than anyone else. For that alone, he has earned this chair. Last Thursday, GA Upper School inducted 18 students into the National Science Honor Society. Of the lifers in the group, I honestly think every one of them referenced Craig’s influence on them. Students explore while learning real science, and GA is giving them the best possible start: Craig Newberger.

"As I was searching for a perfect ending for this speech, my daughter Abbe off-handedly mentioned that she can hardly go a day without thinking of Craig’s moose song. She is in Dunster Residential House at college and the mascot is a moose. Both Issy and Abbe immediately broke out into the song that Craig sang each Friday at the lower school morning meeting for how many years? Craig also plays the hammer dulcimer, a percussion-stringed instrument which derives from the Latin dulcis (sweet) and the Greek melos (song). I love the idea that Craig plays an instrument that is sweet. This suits his personality. And it is abundantly clear from the many heartfelt nominations, that so many of you feel this same way.

I am so happy to award the first Chair for Excellence in the Teaching of Science to Craig Newberger. 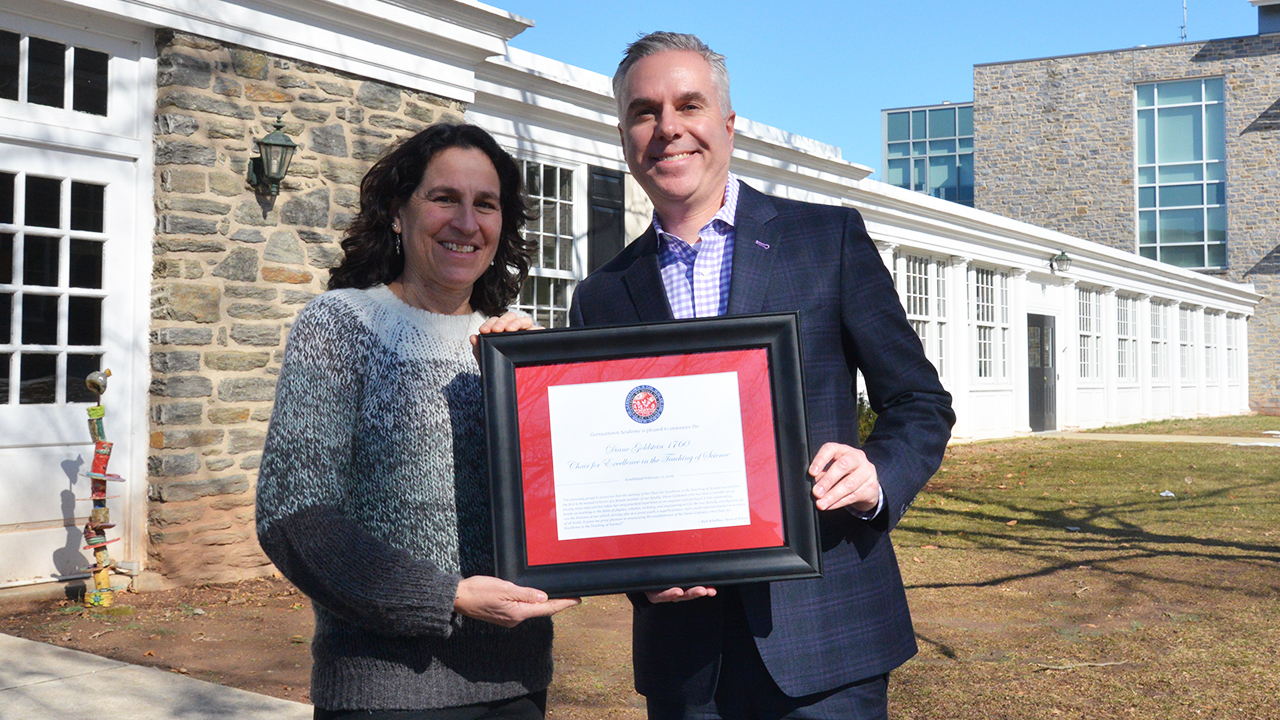 "One of my major goals for this year was to continue to raise funds for honorary chairs at GA, in particular the pursuit of a Chair for Excellence in the Teaching of Science to be awarded, as with the other honorary chairs, on a three-year rotating basis to a master teacher in the Lower, Middle, or Upper School based on nominations from the community. As with the other honorary chairs, an endowment of $100,000 is necessary in order to eventually provide, through interest earned, a stipend of $3,500 per year to the recipient along with an extra $1,500 per year designated for professional development for all members of that department.

"I am thrilled to report that a GA family with two alums has stepped forward to fund the chair in full and in perpetuity. They are so eager to get the ball rolling that rather than wait for the endowment to generate interest over time they have fully invested in order to enable us to make the initial award this June at our end-of-year faculty breakfast. This commitment is such a meaningful testament to the extraordinary work our science teachers have done for, well, 259 years, but it is especially a tribute to our science department over the past 20 years who engaged students so deeply to inspire this award.

"I’d also like to take this moment to thank our Director of Advancement and Strategic Initiatives, Audrey Schnur, for whom funding this and other chairs is a personal passion project.

"The naming of honorary chairs is at the discretion of the donor with approval by GA’s administration. Some chairs are named for GA alums, some for GA families, and others for GA faculty.

"I’m extremely proud to announce that the naming of the Chair for Excellence in the Teaching of Science is a first – the first to be named in honor of a female member of our faculty. A member of our faculty since 1995, this member of the Class of 1760 has taken her very practical experience as an engineer and parlayed it into outstanding, hands-on teaching in the fields of physics, robotics, rocketry, and engineering at GA. She has literally and figuratively run the distance at GA, serving also as a great coach, a superb advisor, and a multi-talented teacher to learners of all levels. Like me, she can’t wait to be part of the bestowing of the first honorary science chair later this spring and hopes this inaugural awarding will inspire dozens of passionate nominations. Please give a rousing round of applause as I present a very official plaque in recognition of the establishment of the Diane Goldstein 1760 Chair for Excellence in the Teaching of Science!"