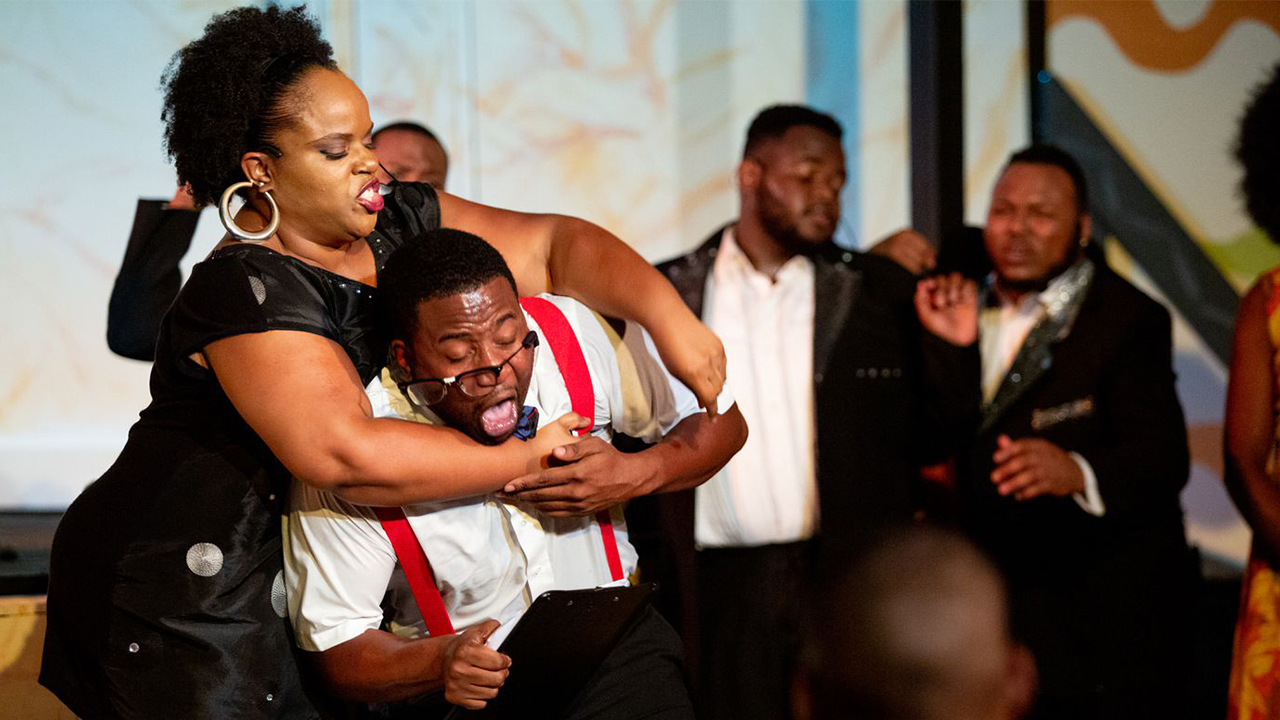 Courtney L. Williams '03 (aka Courtney Lyneé) and her castmates of Lysistrata, Cross Your Legs Sister! were recently featured in The Philadelphia Inquirer for their terrific remake of Aristophanes’ Greek comedy Lysistrata at Church of the Advocate’s Kline Theater (2121 Gratz Street, Philadelphia, PA 19121). (Inquirer Photo Gallery)

To top it off, Lysistrata, Cross Your Legs Sister! was given the honor of being “Barrymore Recommended for Excellence in Theatre” by Theatre Philadelphia

“This production truly is close to my heart,” said Williams. “This is my eighth production with Kaleidoscope Cultural Arts Collective and truly one of the most rewarding! I am a part of the cast as well as a co-music director and vocal coach. A big part of this production was on my shoulders. To be a part of its success and to be Barrymore recommended is truly humbling and an experience I will never forget!”

Named in honor of the famed Philadelphia-based first family of theatre, the Barrymore Awards for Excellence in Theatre have served as Philadelphia's professional theatre awards program since 1994.

In addition to directing, singing, and acting, Williams also serves as the Director of Talent Relations and Marketing for Kaleidoscope Cultural Arts Collective, which has been the resident theatre company at the Kline Theater since 2016.

At GA, Williams graced the stage of the Arts Center Auditorium a number of times with Belfry Club, which is celebrating its 125th anniversary this school year.

“My time in the Belfry club from 1999-2003 was truly an experience,” said Williams. “I truly found my love and passion for theatre in Belfry Club. I created great friendships, and gained the worthwhile experience I needed in order to get accepted into the University of the Arts. There were some challenging moments...yet they made me stronger, and my final performance was the most rewarding. Playing Asaka in Once On This Island in 2003 stretched me, and prepared me for college. I’ll forever be grateful to the Belfry Club and to my amazing teachers Vince Campbell (R.I.P.) and K. Richardson for the training, the lessons, and the belief they had in me. Because of it, I am a professional actress and vocalist today! Congratulations on 125 years!”

Following GA, Williams went on to the Acting Program at the University of the Arts where she was award the "Rising Star" Scholarship. During her tenure, she continued to further her training in vocal performance and theatre. She graduated with a Bachelor of Fine Arts in Theatre in 2007. Since then, she has been in productions at the New Freedom Theatre, was featured Sweet Retreats, a reality show produced by the Live Well Network (a network owned by ABC/Disney), and was featured in the 2018 Emmy Nominated documentary Unchained: generational trauma & healing. She is also an accomplished background vocalist and has had the honor and pleasure to work with artists such as Tara Hendricks, Heston, and Carol Riddick to name a few. Williams started working with Kaleidoscope Cultural Arts Collective in 2011 when she joined the Cast of Ain’t Nobody.