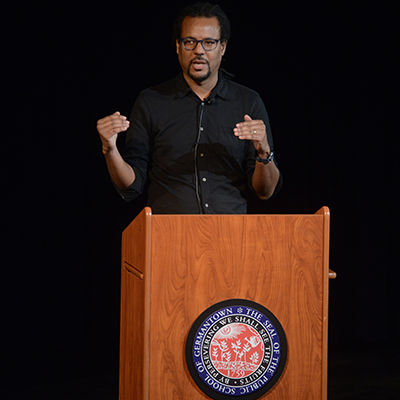 As part of Head of School Rich Schellhas' Distinguished Speakers Series, Germantown Academy was honored and privileged to host Pulitzer Prize-winning author Colson Whitehead on Tuesday, Feb. 27 and Wednesday, Feb. 28. On Tuesday evening, Whitehead spoke to a crowd of over 500 people in the Arts Center Auditorium about his award-winning book The Underground Railroad and answered questions from the audience. The following morning, Whitehead inspired GA Middle School and Upper School students as he talked about his journey as a writer, from his start at the Village Voice newspaper to being rejected by a number of publishers to becoming a No. 1 New York Times bestselling author for The Underground Railroad, and everything in between.

In The Underground Railroad, readers follow a young slave named Cora who escapes a Georgia plantation and, in a surreal twist, travels north via a literal underground subway.

"Pulitzer Prize-winning authors don't happen by chance; years of failed drafts, discarded novels, and intense battles with editors always come first," said Head of School Rich Schellhas. "In all three assemblies he held at GA, Colson Whitehead unknowingly became a life-sized billboard for the GA motto: By persevering we shall see the fruits. Through humor, wry wit, and blunt truth, Colson conveyed the writer's journey in an extraordinarily authentic way. When he wasn't geeking out over Star Wars or basking in Donna Summer's MacArthur Park as a metaphor for his early rejections, Whitehead was self-effacingly discussing how the seed of an idea 18 years ago – what if the Underground Railroad had been an actual train with stations? – needed time to germinate, needed him to become a better writer, and needed the protagonist Cora to rise from within in order to be ready to do it justice. Justice has been served."

The Underground Railroad was also selected for Oprah's Book Club and was the winner of the National Book Award. Whitehead has also written The Noble Hustle, Zone One, Sag Harbor, The Intuitionist, John Henry Days, Apex Hides the Hurt, and one collection of essays, The Colossus of New York.

Whitehead's reviews, essays, and fiction have appeared in a number of publications, such as the New York Times, The New Yorker, New York Magazine, Harper's Magazine, and Granta.

He has received a MacArthur Fellowship, a Guggenheim Fellowship, a Whiting Writers Award, the Dos Passos Prize, a fellowship at the Cullman Center for Scholars and Writers, and was a finalist for the Pulitzer Prize for John Henry Days.