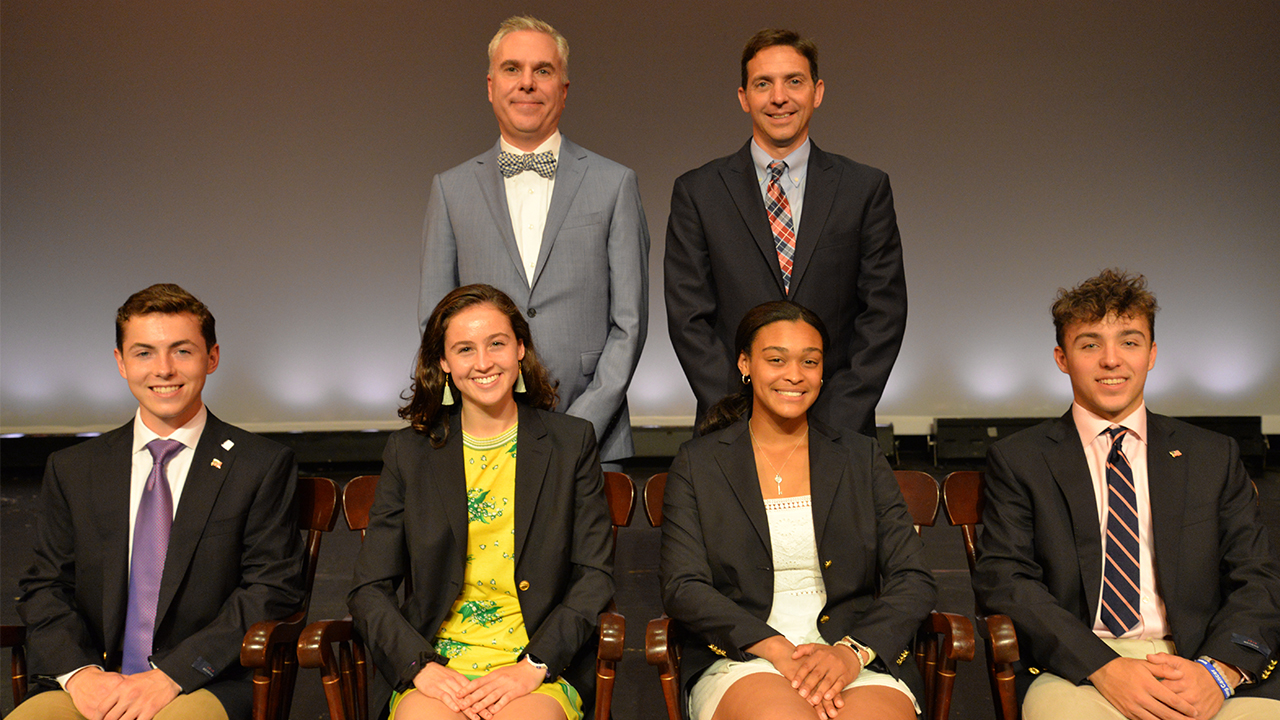 Matthew Sandifer '20, Sasha Capers '20, Isabelle Goldstein '20, and Alexander Browne '20 were each awarded the McNeil Patriot Scholarship Award at the annual Prize Day ceremony in the Arts Center Auditorium on June 7, 2019. Per tradition, they were joined on stage by the current McNeil Patriot Scholars, Danny Ritz '19 (Biggs), Kristine Wang '19 (Day), Priya Padhye '19 (Perot), and Derek Walkush '19 (Rankin),  who congratulated them and presented them with their signature McNeil Patriot Scholars jackets.

The McNeil Patriot Scholarship Award is awarded to two boys and two girls in the junior class who have built an uncompromised reputation in the following areas: leadership, personal character and conduct, scholarship, and full engagement in the extracurricular life of the school. The Patriot Scholars are awarded full tuition for senior year and will assume active leadership roles in the GA community. The four awards are named in honor of four legendary GA educators.

Peter Biggs 1760: Whose teaching of history and unyielding ethical values inspired a love of learning and a respect for scholarship and discipline in a generation of GA students, and whose service as Assistant Head of the School, at that difficult time of transition when GA was establishing itself in Fort Washington, was a model of unselfish devotion to the needs of the larger community.

Virginia Belle Day 1760: Whose teaching of English and drama, and whose warmth of personality, inspired a love of learning and a love of school in a generation of GA students, and whose leadership as the first Dean of Girls made possible the successful transition of Germantown Academy from an all-boys to a fully coeducational institution.

Suzanne Baird Perot 1760: Who, as the school’s first psychologist, and as an English teacher in the Upper School, shared, with a generation of students, teachers, and parents, her extensive knowledge of how students learn, how relationships flourish, and why good stories and good writing matter, and, who, as Dean of the Faculty and Studies, provided the quiet, steady, but passionate in-school leadership that helped create and achieve ambitious Strategic Plans in 1992 and in 1997 that enhanced the school’s reputation for educational excellence and entrepreneurial spirit.

E. Daniels Rankin 1760: Whose teaching of history, especially his creation of the course on Civil Liberties, inspired a love of learning and the development of a social conscience in a generation of GA students, and whose signature role as the founding Dean of the Faculty symbolized the full emergence of the Academy's focused desire to establish professional standards for the hiring of faculty and for overseeing their professional growth and personal well-being.