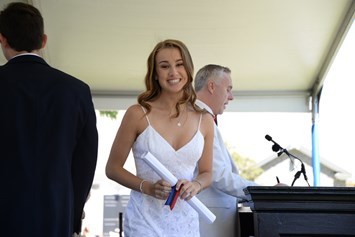 Germantown Academy honored, celebrated and welcomed the remarkable Class of 2017 into the school's illustrious alumni body during commencement on Friday, June 9, 2017 in a beautiful ceremony held on Connor Quad.

Prior to the presentation of diplomas from Head of School Rich Schellhas and Board of Trustees President Judi Goodman 1760, students, parents, and extended family members were inspired and entertained by student speakers Decker Wentz '17 and Julia Buchholz '17 as well as faculty speaker Bob Moyer, who serves as the Upper School History Department Head.

During the ceremony, Vaganos and Alex Smith '17 were awarded the Nahill Memorial Medals, which were established in 1964 by the Class of 1960 in memory of their class president, George Gregory Nahill. The Nahill Medals are awarded to the boy and girl of the Sixth form who, by vote of the class, has done the most to further class unity.

Brendan Carr '17 and Alexandra Kurtz '17 were each presented with the Head of School Prize, awarded to the boy and girl of the graduating class who, while at GA, has made the best use of their talents.

Also included in the ceremony was the induction of new members to the honorary alumni Class of 1760. Alumni Society Board President Cathy Thompson '77 announced that this year's honorary alumni inductees are Head of Lower School Library Bridget Flynn 1760, Fourth Grade Level Coordinator and Teacher Julia Blumenreich 1760, and Director of Counseling Services Janet Maurer 1760.

As per tradition, following the recessional, members of the Class of 2017 and GA faculty lined up on the outer edge of Connor Quad and wished each other well during the traditional handshake line.

Congratulations to our newest alumni!