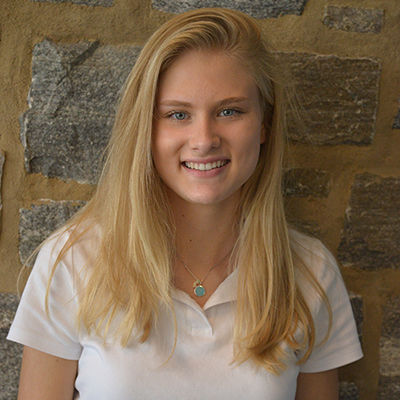 Back in September, Germantown Academy junior Brynne DiDonato '19 was officially "drafted" as a fellow into the third class of The Germination Project, which, according to its website, "aims to create a self-sustaining and perpetuating ecosystem for Philadelphia's next generation of leadership."

The organization's website also states that "by enlisting our region's current leaders, the Germination Project seeks to catalyze and energize an elite cadre of ambitious young men and women, brought together by their talent, drive and commitment to putting their gifts into service for the benefit of our city. It invites our best and brightest, regardless of circumstance, into a committed and empowered fellowship–bestowing a lifetime's worth of opportunities in exchange for a promise by its members to pay those opportunities forward."

DiDonato and her colleagues were welcomed in style at the Union League on September 19 as more than 500 guests gathered for an NBA-inspired draft, which was emceed by Malcolm Jenkins and Mike Quick of the Philadelphia Eagles, and Larry Platt of The Philadelphia Citizen. During the event, Dr. Larry Kaiser was honored with The Icon Award and Pennsylvania State Treasurer Joe Torsella provided a keynote speech. DJ Royale, Angell Morris, Violinist Brian Fitzy and the Impulse Drumline provided enjoyable entertainment.

"It was really crazy," said DiDonato. "It was a very big production and event. There were lots of people there that were influential."

DiDonato, who is interested in public relations and managing talent, was introduced by Jenkins.

"He was really nice," said DiDonato. " I know he's involved in a lot of charitable things."

DiDonato had heard about The Germination Project and decided to give it a try last school year. She interviewed with the organization in March and was officially selected in June.

"I thought it was really interesting," said DiDonato. "I was looking for something community service based and I liked that you can move through it with people in your same year, which creates this lasting connection."

In August, DiDonato and her classmates at The Germination Project attended The Summer Leadership Boot Camp, "a two-week program designed by the University of Pennsylvania's Wharton School of Business and the Wharton Social Impact Initiative." The boot camp's goal was to inspire Germination Project fellows to maximize their individual potential and ability to contribute to Philadelphia's growth through a two-fold approach of leadership development and social entrepreneurial skills development. Under the guidance and direction of professors and guest lecturers, each fellow undertook a range of experiential learning opportunities designed to develop the leadership skills needed to thrive as a leader in the region.

At the boot camp, DiDonato and her colleagues were challenged with creating a social initiative that, if given a grant, would improve the city of Philadelphia. It was their first opportunity to collaborate and problem-solve together.

"Our idea was a literacy programming app, kind of like Duolingo," said DiDonato.

Together as a class, they will pick one initiative to carry out as they work alongside leaders from a variety of Philadelphia's most prominent organizations, companies, and academic institutions.

While The Germination Project is time DiDonato spends off campus after school and on the weekends, she certainly does dedicate her time and energy to a number of GA clubs and teams. In the past, she has served as a captain for GA's Relay for Life team and volunteered with Community Service Organization. She's also a member of Debate Club, Media Club, crew, and indoor track and field. This year, she's added to her extracurricular activities and is interning with the Marketing and Communication team in the GA Office of Institutional Advancement.

DiDonato started at GA in PreK and has thoroughly enjoyed her "lifer" experience thus far.

"I think it's been a great community throughout the years," said DiDonato. "It a safe place and you get to know everyone here on campus. You can go back to Lower School and Middle School. There are lots of extracurricular activities and teachers are so willing to write recommendations and coaches are so nice."