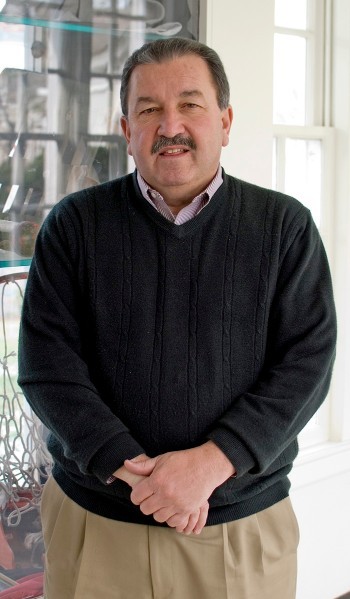 FORT WASHINGTON, PA—James Fenerty, Upper School History Teacher, Varsity Boys Basketball Coach, and College Counseling Athletic Liaison, has announced that he will retire from Germantown Academy at the conclusion of the 2018-19 school year, his 30th at the school.

"On behalf of the entire GA community, l want to express my gratitude for Jim Fenerty's incredible service and commitment to our school and students," said Head of School Rich Schellhas. "His record as a legendary coach speaks for itself – it's astounding, really. What the number of wins, championships, and well-earned accolades don't reveal is the pure humility with which Jim coaches and teaches; he epitomizes our school's mission to inspire students to be honorable in deed. Jim, his wife Mary, and their children will forever be an integral part of the GA family and our school's story."

Fenerty is currently in his 30th season as the head coach of the Patriots' varsity boys basketball team and has certainly carved out a name for himself in Pennsylvania hoops history. Here at GA, the longtime coach currently has 626 career wins (and counting), which is the most in Inter-Ac League boys basketball history. Fenerty is only the third boys basketball coach in Philadelphia history to reach the 600-career victory total. Since his tenure began at GA, Fenerty has led the Patriots to 17 Inter-Academic League Championships and his teams have recorded 17 20-plus win seasons. Most recently, Fenerty and company won five consecutive league titles starting in the 2012-13 season. He also brought home the program's first Pennsylvania Independent Schools Athletic Association title in 2013.

"I have been blessed to be able to pursue my passion for teaching and coaching at Germantown Academy for the past 30 years," said Fenerty, who spent 12 years, eight of which as the head boys basketball coach, at Bishop Egan High School prior to his time at GA. "I am forever grateful to Jim Connor, Rich Schellhas, and the Board of Trustees for giving me this incredible opportunity. Most of all, I am truly appreciative of all the great students and families that have been so kind to me and my family for so many years. These past 30 years have provided me with a lifetime of positive memories. While I am retiring from Germantown Academy as a teacher and coach, I don't think that my love for the school and its community will ever leave me. There is a saying in basketball that one should always play the game with a "Smile in Your Heart." Whenever I think of my GA experience, there will truly be a "Smile in my Heart!"

Over the years, Fenerty has prided himself with putting together a competitive schedule on a yearly basis. Kobe Bryant, Lebron James, and Kevin Durant are three of the most famous stars of the NBA who have played against GA teams during his tenure. His 2001-02 team was ranked as high as No. 5 in the nation.

Fenerty has also given back to the greater basketball community over the years. He has participated in the Coaches vs. Cancer program for the last 30 years and was honored at the Coaches vs. Cancer High School Legends Dinner in April 2017. He also led his popular Saturday Morning Basketball Program for the last 30 years, which introduced the game of hoops to the youngest members of the GA and surrounding communities while giving current varsity players the opportunity to lead and coach.

In addition to coaching and teaching his legendary Civil Liberties history class and guiding student-athletes through the college recruiting process, Fenerty also oversaw GA's entire athletic program for 22 years. From 1994-2017, Fenerty led the supervision of 26 varsity sports, which included upwards of 88 teams and more than 800 student-athletes participating and competing at multiple levels in Middle and Upper School, three club sports, an athletic training staff, and a strength and conditioning coach. During his time, Fenerty championed the creation of GA's Athletic Hall of Fame to honor GA's illustrious athletics history, and was instrumental in the expansion of GA-PC Day to include girls' sports, and eventually, every fall sports team. A basketball court in the new Annex at GA is named in his honor.

The search for a new boys basketball coach will commence shortly following the conclusion of the season.