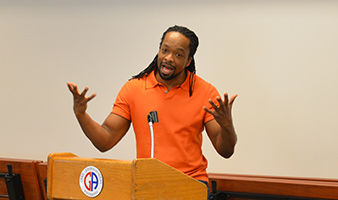 Literature students at Germantown Academy engaged in an elucidating conversation with poet and professor Jericho Brown, PhD during his recent visit to GA. In addition to listening to and discussing Brown's poem, "Dear Dr. Frankenstein," students asked questions about the function of metaphor, the work of an artist, and the necessity of failure.

Brown's poem "Dear Dr. Frankenstein," which appears in his second book, The New Testament, starts out in conversation with Mary Shelley's Frankenstein, which students from both Rachel Lintgen's "Monsters" and Helga Vultz's "Gothic Literature" courses recently finished, but then moves into a more personal examination of the relationship between creative spark and god complex.

"The poet's work," Brown explained, "is to bridge that gap between subjects, and that work happens largely during the revision process."

When students asked questions like, "When do you know a poem is finished?" and "What happens if no one likes your poem?" Brown admitted that neither has an easy answer.

"I write a poem because I want to make a beautiful thing, and I want the reader to feel like they're experiencing a beautiful thing," he said. "I ask myself, 'How do I make a living thing that changes depending on the reader?' When I feel good about those answers, I usually know it's finished."

He continued, "As an artist, we need to have a different relationship with failure. Welcome it; embrace it. The determination to persist is key. Yes, you should have a certain amount of proficiency before you start sharing your work. But once you have the basics down, it's all about where you can take it from there."

"As soon as I read his work," Graffam said, "I knew I wanted him to come here. Jericho Brown's poetry is exciting and thought-provoking, and challenges us to think about issues of identity and alienation that are both personally and culturally relevant, especially now. He drew the students in and encouraged them to be part of the conversation, and the insights he offered into his work in particular, and the writing process in general, added substantially to our understanding of how to read poetry. Plus, his sense of humor reminded us that it's okay to have fun with poems! Although serious ideas are part of the equation, enjoyment should be, too."

Graffam also runs the student-staffed Writing Center, which sponsors author appearances like Brown's as part of its Visiting Writers and Writers in Residence series. The opportunity to learn directly from exceptionally talented authors is a huge perk for GA students.

Aneesh Nair '19 was eager to ask Dr. Brown a couple questions, and after the event said, "I thought [the presentation] was excellently done. He's very charismatic and funny, but most importantly, though, he gives a lot of great insight on how to really write, not just poems, but in general. It made me a little more cognizant of what authors are trying to make when they write, but I also learned it's okay to just appreciate the beauty of the poem instead of overanalyzing the meaning."

About Jericho Brown
Jericho Brown is the recipient of a Whiting Writers' Award and fellowships from the John Simon Guggenheim Foundation, the Radcliffe Institute for Advanced Study at Harvard University, and the National Endowment for the Arts. Brown's first book, Please (New Issues 2008), won the American Book Award. His second book, The New Testament (Copper Canyon 2014), won the Anisfield-Wolf Book Award and was named one of the best of the year by Library Journal, Coldfront, and the Academy of American Poets. His poems have appeared in The New York Times, The New Yorker, The New Republic, Buzzfeed, and The Pushcart Prize Anthology. He is an associate professor of English and creative writing at Emory University.