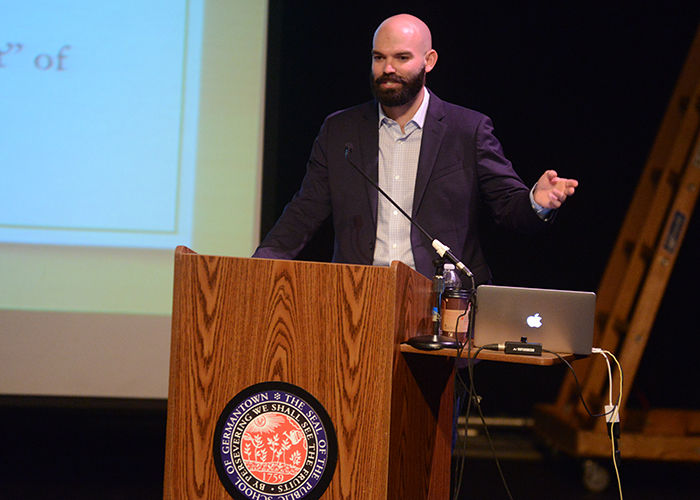 Germantown Academy graduate Pete Vernon '04 returned to campus on Thursday, September 20 where he spoke to both Middle and Upper School students about his career in journalism and the current state of media in the United States.

Vernon, who was introduced by Melinda A. '23 at the Middle School assembly and Alexander Browne '20 at the Upper School assembly, is currently a staff writer for the Columbia Journalism Review, a niche magazine for professional journalists that has been published by the Columbia University Graduate School of Journalism since 1961. Its contents include news and media industry trends, analysis, professional ethics, and stories behind news.

After graduating from GA, Vernon went on to William & Mary College where he played varsity baseball for four years and majored in both English and History. Vernon then spent four years teaching in the Bronx before making the big move to Botswana where he taught for three years at the Maru-a-Pula School in Gaborone. Vernon came home in 2015 and earned a Master of Science in Journalism from Columbia University in 2016.

Vernon's stay on American soil was short-lived as he quickly returned to Africa as an Overseas Press Club of America Fellow with Thomson Reuters. Vernon spent three months working in Johannesburg, South Africa where he covered important news regarding the continent of Africa.

At the Columbia Journalism Review, Vernon writes and podcasts about social, political, and environmental current events.

For Vernon, who started at GA in first grade, it was important for him to come back to GA to share his story with current students.

"I can remember being a GA student, having a lot of ideas about what I wanted to do, but lacking an understanding of what a real-world job track looked like," said Vernon. "I hope that having alumni come back and share their stories shows the students that there are innumerable ways to do the sort of work you want to do, in whatever field that is."

It was equally as important for Vernon to discuss the ever-changing news industry in the U.S.

"Students in high school now are going to be entering adulthood at a very interesting time in our country's history, and I hope that they're excited about engaging with the world," said Vernon. "In 2018, it feels like an especially important time to be talking about how the news gets made."

Like many alumni, Vernon is extremely thankful for the teachers he had at GA.

"Teachers at GA are obviously experts in their fields, but I think their greatest impact comes from imbuing students with a curiosity about the wider world," said Vernon. "I wouldn't have had the opportunities I've had without the preparation provided during my time at GA. I'm quite certain I wouldn't be getting paid to write without a lot of time spent in the English and History classrooms of Ms. Graffam, Mr. Mattern, Ms. Smith, and Mr. Peterson. Beyond academic instruction, my teachers and coaches spent time getting to know me as a person, and helped develop the sense of responsibility I feel in my work today."