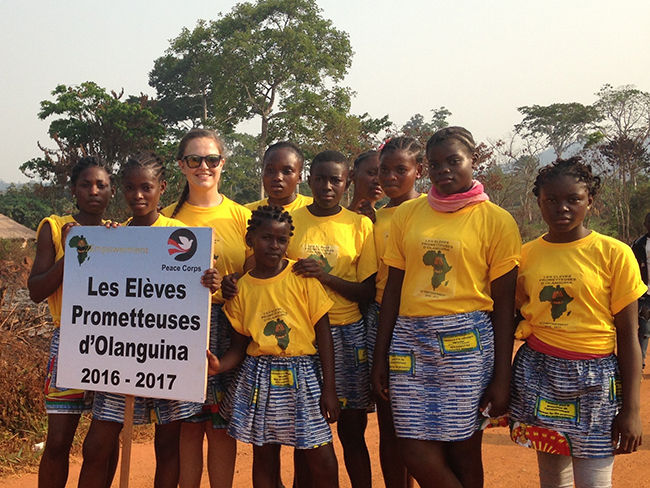 Following a Spanish language immersion experience in the summer of 2008, Germantown Academy alumna Lauren Eby '10 knew that she would like to serve abroad.

"Since that formative experience, I knew I wanted to do what I could to apply my skills and experience toward helping communities in the developing world improve their livelihoods through economic development, food security, and women's empowerment activities," said Eby. "I focused on all of these topics throughout my undergraduate and graduate studies in order to equip myself with the greatest academic knowledge possible to maximize my ability to serve."

Eby worked hard at her dream by completing a double major (International Studies and Latin American Studies) and a double minor (Africana Studies and Economics) at Johns Hopkins University where she graduated with honors in just three years. At Johns Hopkins, she was just one of two candidates chosen for a five-year accelerated B.A./M.A. program with Johns Hopkins and Sciences Po (Paris, France), where she earned a Masters of Arts in International Public Management.

Before she headed off to Cameroon to serve with the Peace Corps, Eby also gained valuable experience with stints at the U.S. Embassy in Paris, The Kaizen Company, and The Wilson Center. In Olanguina, Cameroon, a remote village of 300 people in the Francophone part of the country where she served from 2015-2017, she held two positions: Agriculture Extension Agent and Girls' Empowerment Facilitator.

"As an Agriculture Extension Agent, I conducted needs assessments and farm visits, and then organized and hosted trainings on a variety of new agricultural techniques and crops according to the needs and interests of the community," said Eby. "In practice, that meant spending a lot of time with farmers, working alongside them in their fields in the bush. I also read a lot of technical documents, and then distilled and translated the information into culturally appropriate delivery methods for trainings. I also added an intensive farming component to the curriculums of the local high school and technical school—starting a demonstration garden plot at each school and teaching the students about compost and new nutrient-rich crops during their "travail manuel" (manual labor) class periods."

"As a Girls' Empowerment Facilitator, I wrote, won, and managed two rounds of grants for a girls' group and scholarship program," added Eby. "I organized monthly meetings where I gave lessons on topics like sexual health, goal setting, personal money management, etc.

In researching additional ways that Eby could serve her Cameroonian community, she came across a non-governmental organization called Aid to Empowerment, which provided funds to cover school fees of high school girls. In early 2016, Eby coordinated the application process for nine girls at the high school of Olanguina, all of whom were accepted for the 2016-7 academic year. She then organized 10 monthly meetings during that school year and organized a Career Day as part of the program, where she invited two professional women to come speak to a group of about 35 girls about their experiences in their chosen field.

"I then repeated the application process for 16 girls at the high school and technical school of Olanguina, all of whom were accepted for the 2017-8 academic year," said Eby. "I received a generous donation of 25 books and then organized Reading Day where the 16 secondary school girls read books to a group of 30-plus primary school girls. I also trained my successor—in facilitation techniques and the girls' group curriculum—to ensure that the program continued after my departure."

Eby's journey abroad to a remote village in Cameroon started in the classrooms here at GA where she fell in love with learning other countries' languages and cultures.

"Mrs. Romeu was a huge source of inspiration for my love of language and cultural immersion," explained Eby." I was in her 10th grade honors Spanish class and wanted to continue on the most accelerated path and take AP Spanish Language in eleventh grade so I could take AP Spanish Literature in twelfth grade. I had a history of high grades and high performance in Spanish, however I was very reluctant to speak in class—wanting to construct perfectly formed sentences instead of just speaking to get my point across—and Mrs. Romeu was worried that I'd struggle in AP Spanish Language, since it was so speaking-intensive. So she suggested I do a summer language camp or immersion abroad, and I ended up in Vejer de la Frontera, Andalucia, Spain for three weeks in the summer of 2008. My host family could not have been a more perfect fit. After finally getting over my hesitation to speak, we got to talking about everything and anything—from U.S. politics to the typical American stereotype to Spanish art and culture. It was at this moment that I knew that as much as I loved traveling and tourism, that I much preferred having the opportunity to live abroad and immerse myself in the local culture. I returned to Spain and my Spanish family to complete my Senior Project in May 2010, and then again for winter break when I was studying in Paris. We continue to be in close contact. Obviously, Mrs. Romeu's encouragement to push me out of my comfort zone really impacted my future. It truly is the reason I'm working in international development today."

Here at GA, Eby swam and played water polo for the Patriots. She was also a member of the Singing Patriots and participated in Women's Forum and Model UN. For her, like many other GA alumni, there were a number of teachers who had a positive impact on her.

"Mrs. Dwinell, Mrs. Ayers, and Mrs. Romeu provided me with a strong base in Spanish and an interest in Latin American culture that I built on for the rest of my academic career and beyond," said Eby. "Mr. Merow, Mrs. Haddad, and Mr. Oelkers really cultivated my love of math. Before deciding to go into international affairs after my formative summer immersion in Spain, I thought I wanted to be a mathematician. Mr. Sloyan, Doc, and Dr. Torrey challenged me to write both concisely, analytically, and creatively. Mrs. Rubinfield, Mr. Stephens, and Mr. Moyer made learning about history fun and provided me with a strong base for the rest of my academic career."