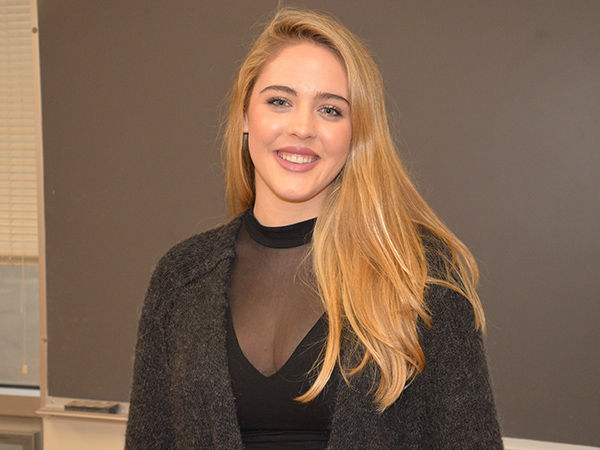 Germantown Academy alumna Emma Hearn '14 returned to campus on January 10 where she performed for both Middle and Upper School students. Hearn, a senior Musical Theatre major at Texas State University, who most recently played Cassie in Chorus Line, also talked about her journey here at GA, going from a Middle School thespian to a Belfry Club superstar.

"A lot of my focus on classes here at GA were music related and the Belfry program was an awesome addition to that," said Hearn, who plans to move to New York City this summer to pursue her dreams of performing on Broadway. "I was offered so many different varieties of classes for musical theatre that I was really able to train and hone the craft before auditioning for colleges, which was really awesome. The biggest thing I took away from GA was work ethic and I think that went across the board, whether it's over in the main building or the Arts Center. I think what is wonderful about the school is that they put such a huge emphasis on the arts program at GA and as a result we were able to do a varieties of shows. We were not just doing your traditional musical theatre, but were able to do shows like Bat Boy, 9 to 5, Urinetown, and Sweet Charity. I don't know a lot of programs across the country that can say that."