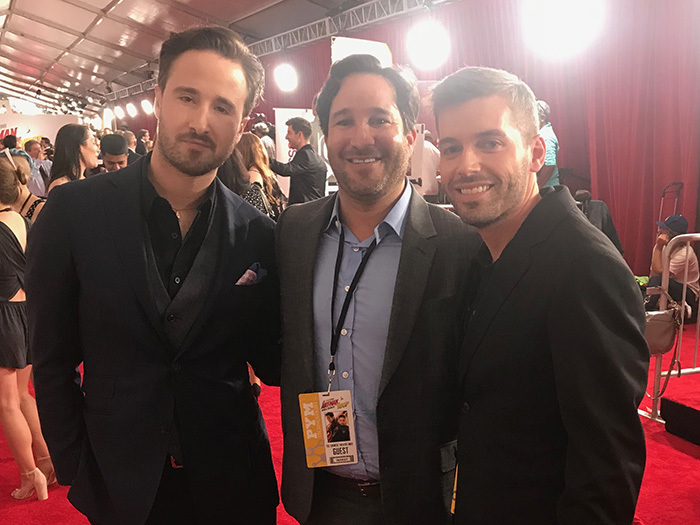 For as long as Germantown Academy graduate Andrew Barrer '02 (pictured on the right) can remember, he has always wanted to write...even before he could write.

"That was my one and only dream," wrote Barrer in an email interview with Germantown Academy.

Barrer, now a much in-demand writer and producer, certainly isn't dreaming anymore. After one of his scripts landed on 2010 The Black List, he and his writing partner, Gabriel Ferrari (pictured on the left), have been just a tad bit busy. Their latest project? Ant-Man and The Wasp, the much-anticipated blockbuster sequel to Ant-Man (2015). Ant-Man, the first film in Marvel Studio's latest series, starred Paul Rudd and topped $500 million worldwide according to an October 29, 2015 Forbes Magazine article. Marvel tapped Barrer and Ferrari to work on the last round of rewrites for Ant-Man and fortunately for them they quickly developed a good working relationship with Rudd while working on set, which opened up the door to them being asked to co-write the entire screenplay for Ant-Man and The Wasp. Ant-Man and The Wasp will debut in American theaters on Friday, July 6.

"Writing movies was always a part of that [dream], but became my focus only after college," wrote Barrer, whose work will be viewed by millions of people around the world, a facet of working in the film industry that is "both gratifying and terrifying" for the GA alum. "We do what we do to entertain people, so it really does matter to us how people respond. If I'm sitting in a theater and people are having a blast on July 6 then I'll feel pretty amazing! The critics have responded really well to it so far, so that's been pretty cool."

Writing a screenplay for a Marvel franchise (X-Men, Iron Man, Captain America, The Avengers, etc.) can be tricky. Barrer and Ferrari not only had to write a compelling story for this summer's edition, but were also tasked with weaving in secondary storylines that will play out in future sequels.

"The development of the movie required a lot of planning ahead," wrote Barrer. "Of course, our director, Peyton Reed, came with a vision, but there was also the matter of satisfying the studio's ambitions for both the Ant-Man franchise, as well as its place in the larger Marvel franchise. So, the early days of the project were spent at a round table with Paul, Peyton and various producers, nailing down the agenda before we went off to do the actual writing."

Barrer and his colleagues had about three months to complete the first draft of the screenplay, which was a very intense process and involves plenty of collaboration and foresight.

"When the initial conversations eventually arrive at an idea of where we all want to go with the story, the next step is outlining," wrote Barrer. "The outlining stage is different for every project, but we did a ton of outlining on this one. Months of outlining. The idea was to have the story so locked in, the writing of the actual screenplay would go as smoothly as possible. But all of these stages are built into the schedule ahead of time and there are pretty hard deadlines throughout the process. With a movie like this, the studio often plants a flag in a release date before they even assemble the writing team. So you're locked into that schedule from the start."

According to Barrer, the Marvel Studios movies are only loosely based on the comic books from which they originated so most of the stories have to developed from scratch.

"But, this being a sequel, there were also some obvious story elements we knew we had to tackle, and we also had to account for some major events that impacted the Ant-Man character in Captain America: Civil War," wrote Barrer. "So it's kind of a mixture. There were points we knew we had to include and connect, but our job was to figure out how to do that in the events of the story itself."

One of the big differences in Ant-Man and The Wasp is that for the first time in Marvel Cinematic Universe's history moviegoers will see a female charter in the title.

"I think there was a general sense of duty for the entire team to really earn the fact that we were the first Marvel movie to have a female hero's name in the title," wrote Barrer. "For our director especially, every step of the way it was about making sure the Wasp was an equal partner...a fully-realized hero and not just a sidekick to the dude. Ultimately, we realized the best way to go about that was to stop thinking of her as a 'female hero' and just let her be a 'hero' pure and simple. Yes, Wasp is a woman, but we wanted that to be feel as incidental as the fact that Ant-Man is a man. Her motivations aren't 'female'...they're human. Ghost is a woman because, why not? Her motivations aren't limited to gender, so I think the team ultimately decided to build the most inclusive cast they possibly could."

In an ultra-competitive American movie industry, there is no super hero power that opens the door to instant success for writers. It usually takes years of hard work and persistence. Barrer was no exception. After graduating from GA he went onto the New York University where he studied in the Gallatin School of Individualized Study where he was given the opportunity to design his own major.

"I focused on the intersection of philosophical movements and literary movements," said Barrer.

Ironically, Barrer only took one screenwriting class during his time at NYU.

"I was just a massive fan of movies and learned by example," wrote Barrer. "Every journey is different in this business, but mine was maybe a little unusual because I didn't study screenwriting in college and then I wound up selling a screenplay that I wrote with Gabe when we still had very little understanding of how the business worked. That was Die In A Gunfight. It was a really unconventional screenplay, but we put our hearts and souls into it and it got us on the map because producers liked our 'voice.' There's this thing called The Black List, which is basically a list of the 'favorite' scripts floating around that year. Gunfight landed on that list, and things progressed from there. Ant-Man didn't come around until after we spent a handful of years working on studio screenplays that never went into production. There's a lot of unglamorous struggle in this business, and we were no exception."

But now that he has "arrived," Barrer fully understands that he still has to work hard in order to have the opportunity to write the next great film or television series.

"I've wanted to do this since I was a kid, so it really does feel like a dream come true," wrote Barrer. "If you really love what you do, and if you really want to be excellent at it, the tendency is to always be moving the goal post. You look ahead and you say, 'When I get there, I'll feel accomplished.' But then you get there, and all you can do is look ahead to the next goal post. I think it's important to never rest on your laurels if you really care about your craft. That said, I do try to remind myself to take a breath and enjoy the moment. I worked hard to get here, and I'd be lying if I said it didn't feel pretty cool to see my name up there on the screen."

For Barrer, there is never a dull moment. He and Ferrari are currently finishing up two studio screenplays, getting ready to pitch a vision for a third screenplay, and working on creating a television show based on a Stephen King short story.

"People often don't realize screenwriters are just freelancers," wrote Barrer. "We always try to have a lot of irons in the fire, because you don't always know what will pan out."

Barrer is not the first GA alum to find success the film and television industry. Over the years, many GA graduates have written, produced, directed, and acted in major films.

"GA really puts a focus on teaching kids how to express their ideas," wrote Barrer. "All that focus on essay writing, and the wealth of opportunity in the English department, builds students who are really well prepared to get their point across. That's an invaluable skill. A few years back, I went to a screening for American Hustle, and there was a Q&A with the entire cast after the movie. When Bradley Cooper (GA Class of 1993) spoke, he was noticeably articulate. I remember thinking, 'That's GA.'"

Barrer started at GA in sixth grade and is immensely grateful for his teachers here at GA.

"Robynne Graffam and Peter Drewniany pretty much taught me how to truly read and write in high school," noted Barrer. "Their classes were formative experiences, and they gave me a hunger for fiction that set me on my course. If you ever get frustrated with Graffam's rule against "to be" verbs, shut up and accept the challenge. She's making you better. Also, shout out to Mr. Rittenhouse because he's the man."

We can't wait to see what Andrew will write next! Congratulations Andrew!