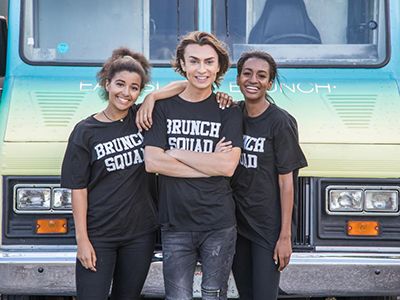 Alumni Food Truck Made it to Final Three on The Great Food Truck Race
September 15, 2017

Television personality and chef Mikey Robins '16 and former classmate Taylor Randolph '16 made up two of three members of the Breakfast Club Food Truck, which competed in Season 8 of the hit show "The Great Food Truck" race on The Food Network. The GA-led "Team Brunch Squad" survived many of the challenging competitions and were just one of three teams remaining before they were eliminated in the Sept. 17 episode. The show, which premiered on August 20, followed Robins, Randolph, and their teammate, Ashanti Dixon, along with six other food trucks, all over the country.

Robins, the team captain, is no stranger to the Food Network. At the age of 14, he became the youngest winner ever on the show "Chopped." He's also appeared on "Kitchen Inferno."

"Mikey Robins isn't your typical 19-year-old," wrote the Food Network in August 2017. "He's been cooking since he could reach the stove and already owns and operates a high-end event planning and catering consulting firm. His best friends Taylor and Ashanti are also a force to be reckoned with, and Mikey hopes their competitive spirit leads them to the finish line. Their brunch-on-the-go menu includes chicken and waffles, breakfast quesadilla, and eggs Benedict sliders."

"We're a millennial team that's fun, strong, and united," Robins told The Philadelphia Inquirer. "We play off each other, and together. We're like a superhuman."