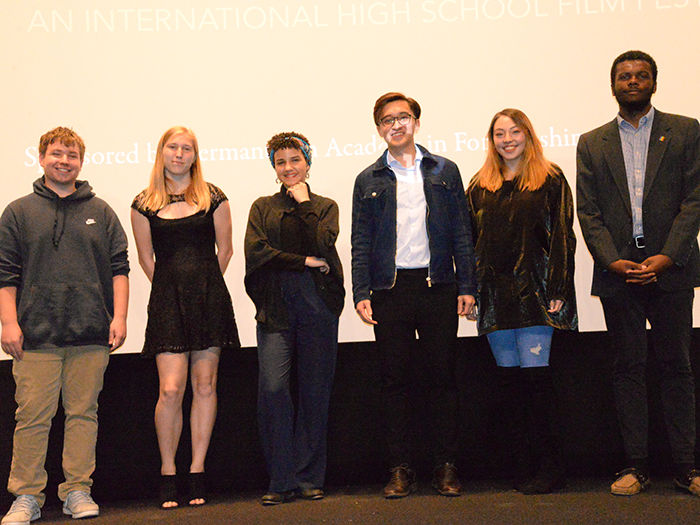 There was a buzz in the air on Sunday afternoon as student filmmakers entered The Ambler Theater and walked the red carpet at the screening and awards ceremony for the 2018 Film Now Festival, an international high school film festival hosted by Germantown Academy that gives students from all over the world the opportunity to showcase their work and have it juried by film professionals, including Tony Pitone '87 (Narrative Juror), Cameron Yates (Documentary Juror), Natalie Difford (Experimental Juror), and Josh Apter '89 (Jury Prize).

There was plenty of anticipation leading up to Sunday's event. Overall, 81 short films from 24 schools, 10 states, and seven countries were deemed "in consideration."

"The quality of films in consideration this year was incredibly impressive," said Germantown Academy Assistant Director of Marketing & Communications Adam McGrath, who has led the festival the past three years. "The depth of storytelling, emotional honesty, and technical achievement demonstrated in our finalists' work proves what young filmmakers can do. To have the opportunity to be assessed by industry professionals, network with their peers, and see their film up on the big screen along with an audience is something that will stay with them as they pursue a career in the arts. It's very rewarding to work on a festival that provides that kind of platform."

In the end, three films from each of the categories (Narrative, Experimental, Documentary) were selected as finalists and shown during Sunday's screening. Finalists were also awarded cash prizes for first, second, and third place ($300, $200, $100).

Ava Young of Toronto, who won the Documentary Category for her brilliant film, You Look Nothing Like Your Mother, also received the overall Jury Prize, a Padcaster Verse Kit. The Jury Prize was selected by Apter, founder of The Padcaster and The Padcaster Verse, which transform tablets and smart phones into mobile media powerhouses.

Five area films that were given Honorable Mention awards were also screened as part of the Tri-State Showcase.

The Film Now Festival was launched by GA and was born out of a passion for guiding young people to the art of filmmaking. Taking inspiration from the Digital Media program at GA, alumnus Geoffrey Jackson '87 and his family pledged a generous gift to create a film festival that would offer high school students from all over the globe the chance to submit original short films to be judged by a panel of industry experts.