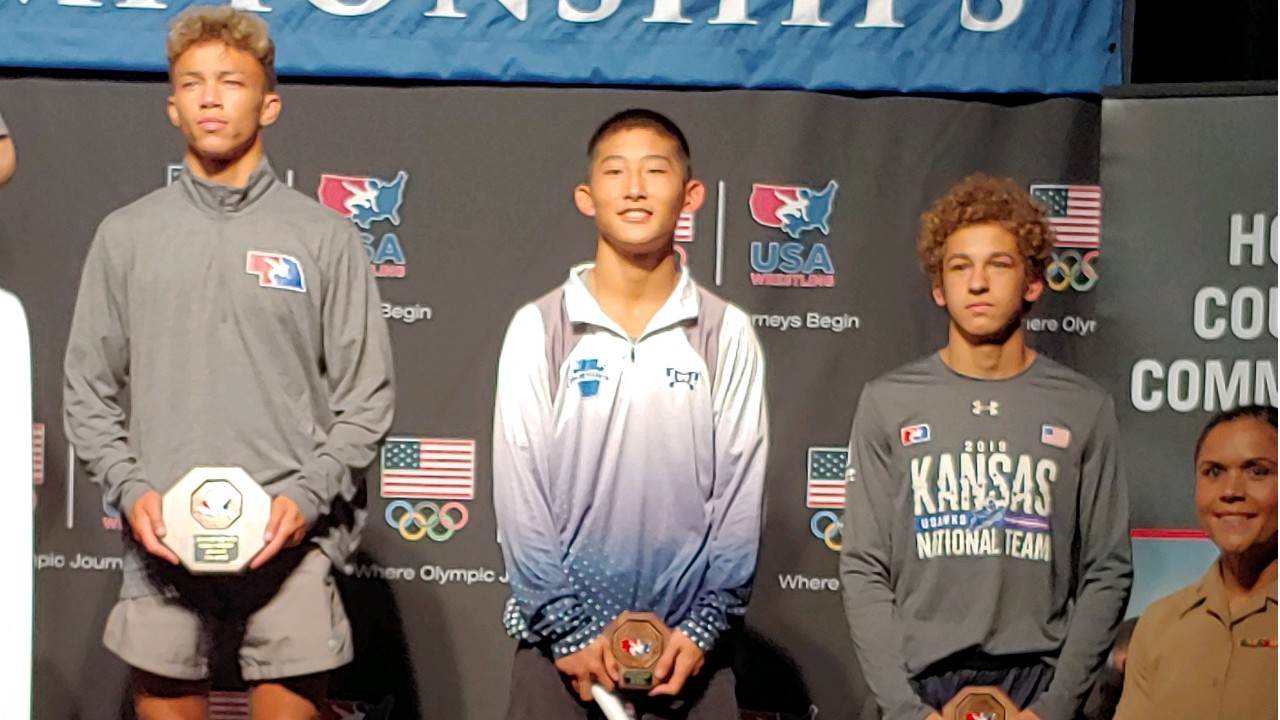 FARGO -- Christopher Kim '20 woke up on July 19 an All-American. The rising senior had earned that prestigious honor the night before at the 2019 USMC Cadet and Junior National Championships, and while it was a big accomplishment, it was not the final goal.

Kim had the opportunity to compete for a third-place finish at the competition. All he had to do was win three matches against some of the best wrestlers in the country.

While he did not make it to the third-place match, Kim did come away with a fifth-place finish in Greco Roman, the best he has ever put up at the competition.

Head Coach Solomon Fleckman said that despite the score, the match was a lot closer than indicated.

"Three matches in, he had to wrestle [Jakason Burks] who is one of the best in the country," Fleckman said. "They're old rivals, they've wrestled before -- and Chris did a great job in that match. Unfortunately, it didn't really go our way. It was a tough loss, but it was a great match in terms of how it was fought."

After the loss, Kim went another tear, reeling off two consecutive victories by pinning his opponents. The final match on the 18th pitted Kim against Jett Strickenberger of Colorado, who is a United States World Team member.

However, Strickenberger proved no match and was also pinned by Kim, eliminating him before the All-American round.

Going into the second day, Kim won his opening match against Christian Cabaug of California. Fleckman said that Kim started off pretty slow, but got on a roll and eventually won by technical fall, 12-1.

Awaiting Kim in the Consolation Semi Final was Burks. Unfortunately, the wrestlers hailing from Nebraska once again proved victorious, this time by technical fall, 10-0.

Fleckman said that he thought Kim was so excited about that opportunity and wanted to do everything right and because of that "didn't perform his best."

"I think he was just anxious because he knew the first match was nip and tuck and could have easily gone his way," Fleckman said. "This match, he made a mistake early and with all the emotion, he wasn't able to keep it together."

Despite the loss, Kim still had to wrestle in the fifth-place match. He took an early 6-0 lead in that bout and held off a late run by his opponent to claim a 6-4 victory and fifth place.

The finish bests Kim's seventh-place performance from two years ago. It also adds another impressive accomplishment to his already amazing resume.

"He looked great," Fleckman said. "It's his second All-American in three years. He took seventh two years ago, fifth this year. In terms of GA wrestling history, there haven't been many guys to come [to Fargo], let alone place here. He's won six state titles in a row in two years -- freestyle, Greco and during the regular high school season. I don't know if any GA wrestler has ever done that. His credentials right now are inching him up into the top-10 of all-time sort of thing [at GA], and I don't put that lightly, but he's done quite a bit."