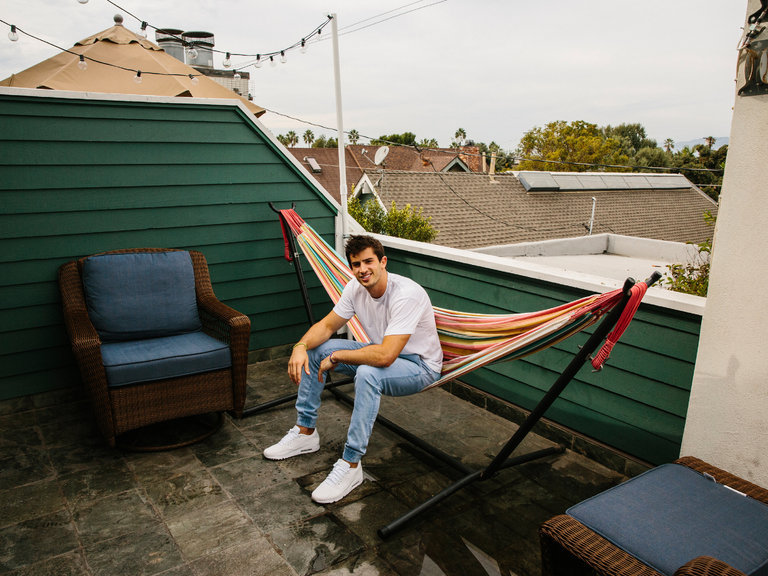 Patriot Entrepreneurs: Austin Kevitch '10
Jan 18 2017
Share to FacebookShare to TwitterShare to LinkedInShare to PinterestShare to EmailPrint this page

Germantown Academy alumnus Austin Kevitch '10 has one simple goal in life: to brighten the lives of folks around the world through his app, Brighten. The app allows users to send compliments to friends anonymously, as a kind of antidote to social media bullying. The apps tagline is 'It feels good to make someone smile.'

Kevitch, who was recently featured in The New York Times Dec. 20, 2016 edition, was inspired to build the app after a close friend passed away in a climbing accident and his Facebook page was filled with positive memories.

"I wished Oliver could've read those messages while he was still alive," said Kevitch, who went on to study at Bucknell University after graduating from GA.

Before any code was written out, Kevitch had to find out if people would be interested in his app, which he had envisioned as a digital compliment box. So, he did what all entrepreneurs do; he built a prototype—a very simple one.

"To test the concept of Brighten, I bought a small box and wrote 'Compliment Box' on the lid," said Kevitch. "I left it on a table with a pen and some notecards. Students wrote stuff about their friends on the notecards and dropped them in the Compliment Box. Everyone would gather around as we opened the box and read the compliments aloud. Some notes were lovey dovey, and others were hilarious. They were fun to write. Shortly after, I found a software developer in the Philippines to help me build a prototype of the mobile app."

When Kevitch released the app in 2014 it drew 5,000 users in its first three months. Since then, more than 10 million messages have been sent by its one million users, many of whom are in high school and college.

"Both of those numbers have been increasing exponentially since The New York Times article!" said Kevitch. "I can't say it blows me away because I'm constantly stressing about the next milestone, but if someone told me a couple years ago that over a million people would be using Brighten one day, I'd be shocked. I should remind myself of that more often."

Kevitch receives great user stories all the times, but his favorite comes from a third grade teacher in New Jersey.

"She reached out to us because her kids don't have iPhones yet so instead they draw iPhones on pieces of paper and physically hand compliments to each other. She sends us photos of them doing it. It's so cool," said Kevitch.

While Kevitch is certainly enjoying the success of his app, he admitted that working as the CEO of a startup company is certainly not easy.

"Since my dream of being an NFL quarterback hasn't come true yet, I guess being a CEO is the next best thing," joked Kevitch, who played quarterback at GA and Bucknell. "I'm very lucky. Steering the ship can be scary at times so I try to keep the office fun by making ridiculous funny presentations (certain GA teachers punished me for these back in the day) and pulling pranks on people. We also have a planetarium show in our basement. The startup lifestyle is a roller coaster so I try to remind myself to appreciate it. I don't always know what I'm doing so I just have to trust that I'll continue to figure it out along the way.

"Something I learned is that in the real world, aside from close friends and family, no one really cares about you," continued Kevitch. "And I don't mean that in a harsh way; it's actually really motivating. Because once you stop expecting opportunity to randomly come knocking on your door, you get this wake up call that the only way to create momentum is to do it yourself. The beginning is the hardest part because very few people can imagine something that doesn't exist yet, so when telling people about your idea for a brand or a product or piece of music or a film, etc., expect them to laugh. Once you get the ball rolling, the right people will want to join you. Remind yourself that everything around you was originally built by someone no smarter than you are. Big time CEO's are still googling how to do things."

Kevitch, whose company has grown to eight people, has a few GA friends in his corner to back him up. Classmate and former GA center Alec Lorraine '10 is the company's "Chief Happiness Officer" and handles operations and community support, while classmate Tim Cannon '10 is leading Brigthen's campus representative program and product engagement.

Lorraine recently landed Brigthen a partnership with the "Be Cool Be Nice" social media campaign started by Willow Smith that was built around the hashtag #BeCoolBeNice and the idea that "Kindness is always in style."

"Our big milestones for 2017 will be launching our Android version, launching Brighten overseas, and landing partnerships such as the White House," said Kevitch.

At GA, Kevitch, who arrived in second grade, was the captain of the football team. He also captained the track team and played basketball and baseball. Like many GA alums, his teachers had a tremendous influence on him, including Upper School Physical Education & Wellness teacher Jeff Preston, Upper School Latin and English teacher Dwight Peterson 1760, and Upper School Spanish teacher Carol Ayers.