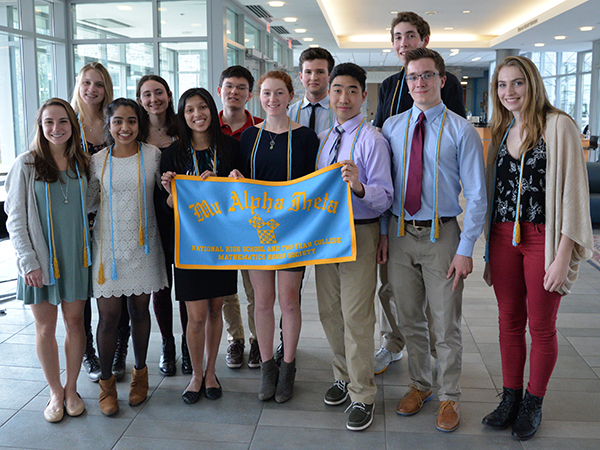 To be eligible for Mu Alpha Theta, students must be seniors, must meet grade requirements for their honors level mathematics courses as well as an overall GPA requirement, and may not have earned any honors strikes within 12 months of induction.

"The students inducted into Mu Alpha Theta Mathematics Honor Society are all stellar math students who have met a very stringent list of qualifications in order for them to become members," said Upper School Mathematics Department Head Marcia Wexler 1760. "It has been a true delight getting to know them and work with them during their time at GA and especially this year, their senior year!"

"As a kid, my dad was always interested in how things worked, and he still is today," said Larissa in her speech introducing her father. "He first went to college to be a stockbroker, but that wasn't working for him so he took a few years off and got a job installing radar systems in F-16s that my grandfather designed. After that experience, he knew what he wanted to study and went back to The University of Maryland to pursue a degree in electrical engineering. He then earned a job building space craft components and subsystems. He's worked on programs that are so top secret he can't talk about them. His love is for the earth science programs that he worked on as a contractor for NASA. The most famous ones he's worked on are the Mars Observer and Hubble Space Telescope, but he's most proud of being a systems engineer and payload test director for programs such as the Gamma Ray Observatory, Upper Atmosphere Research Satellite, and WIND spacecraft.

Congratulations to our newest inductees!