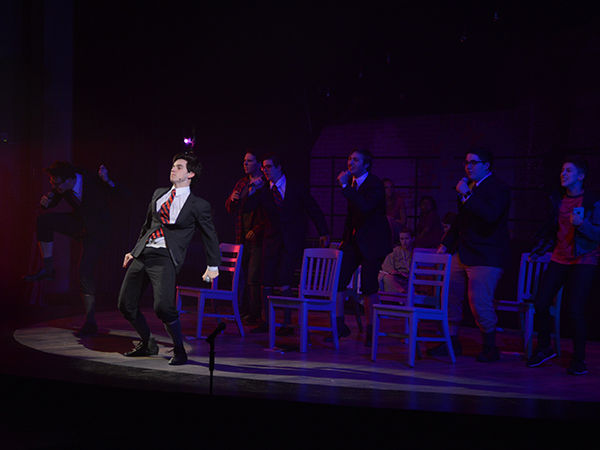 Over the years, Germantown Academy's Belfry Club, the nation's oldest continuously run high school dramatic club, has taken on some pretty ambitious plays and musicals, from Shakespeare to Neil Simon. When Belfry Club Director K. Richardson was deciding on the next musical for her cast to perform, she took a good look at her talent pool, and the state of the world, and decided that Spring Awakening would be an incredibly compelling production to tackle.

"I think the balance of boy and girl characters in the show was a good match for our talent pool right now," said Richardson. "While ten years ago we had really operatic singers, today's student group has a very modern sound. I also thought the kids would really be excited about this show, and knew I had a group that could handle the complexity of the situations within. Fundamentally, this show is about adults failing the children in their lives, and I think that is incredibly relevant right now. We have responsibilities to our young people. We have a responsibility to pass our wisdom onto them so they can negotiate this world."

German playwright Frank Wedekind wrote Spring Awakening: Tragedy of Childhood in 1890. At the time, it was widely considered one of the first classics of modern theatre. Over one hundred years later, Steven Sater and Duncan Sheik teamed up to create the Tony Award-winning, alt-rock musical Spring Awakening, which is "every bit as groundbreaking as the original" wrote Richardson and Performing Arts Chair Charlie Masters in a letter to parents and students back in the fall.

"Spring Awakening is fundamentally about young people failed by the very adults and institutions that should be supporting them—parents, church, and schools alike. The play addresses many current issues for young people head on: the onset of puberty, two sisters abused by their father, teen fornication, a mother who takes her daughter to get an abortion, academic pressure, parental rejection, suicide, and a gay relationship between students. The characters in the play are imperfect, often make poor decisions and must deal with the consequences. The modern songs use strong and specific language to voice the teens' feelings, and the original lyrics will be used. Additionally, the show will maintain an R-rating due to the mature content and language...By refusing to address these issues with the teens in the play, the stage adults fail to pass on their wisdom, and leave the children ill-prepared to handle the dangers they face.

"We hope by sharing issues raised, we are not just having conversations here to better understand a piece of art, but are empowering you to have the conversations that support your family's values at home."

With teenage performers in mind, Richardson brought in Jacqueline Holloway, an internationally-recognized fight choreographer and stunt performer who offers training and workshops, to lead the cast in a workshop that examines and tackles what consent is, in and out of the world of theatre.

"The workshop was pretty amazing," said Richardson. "Consent is a big issue in the news and watching our students negotiate with each other as to how they wanted to be treated made me think this is a really good thing for them as people, not just actors. Learning how to advocate for yourself so that no one can make you do something that makes you feel unsafe; these are valuable lessons. I had students coming to me afterward saying every kid should do this workshop."

The workshop also allowed the cast to bond and come together to create a strong team.

"Everyone is starting off with the same vocabulary and treating the show with respect," added Richardson. "It's really important in terms of protecting our young people and everyone knows the rules. It was a wonderful experience of cast bonding. This is really an ensemble show and it's not like this just affects some people—it's everyone's show."

"Doing this work is important to me because I feel like talking about these issues is so taboo," said Emma Caplan '19, who is a member of the girls' ensemble. "Trying to explain the plot to my friends can even be uncomfortable, but it shouldn't have to be. This musical talks about real issues in real ways. It is uncensored and that can be scary, but it can also be monumental. I think we have all grown a lot as people and as actors by participating in this performance. I feel incredibly lucky to have the opportunity to be a part of this production. I think the workshop in the beginning, although at the start slightly uncomfortable, made us realize we have such a special opportunity to talk about these issues and how we should all feel very lucky."

Not surprising to Richardson, her veteran cast and crew has risen to the occasion and are handling the show like professionals.

"This musical is based on a very old play, and the material in the play is shocking," said Richardson. "Our kids just get it. They understand the problems, the characters and where they are coming from. Many times, I need to fill in some of the life experiences behind the characters to help students get into their role, but with this one, they know the material better than I do.

"There is a true sense of collaboration with this show, as we are bringing this show to stage together, more than me leading it. Allowing our cast to showcase themselves as owners of the words and songs brings more responsibilities to them and I am proud to say they have lived up to it. They are hungry to do work like this."

There has already been an incredible amount of buzz surrounding Belfry's upcoming performance in the Cappies (Critics and Awards Program) community. The Cappies is an international program for recognizing, celebrating, and providing learning experiences for high school theater and journalism students and teenage playwrights.

"Spring Awakening has been a very special show to work on," Richardson said. "All the final details are coming together, but I feel confident in saying that this is one of the most exciting shows that I have ever done."