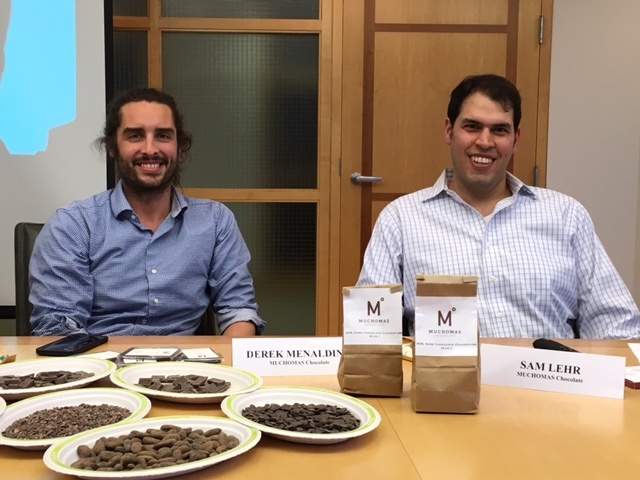 Patriot Entrepreneurs: Sam Lehr '00
Feb 13 2017
Share to FacebookShare to TwitterShare to LinkedInShare to PinterestShare to EmailPrint this page

About three years ago, Germantown Academy graduate Sam Lehr '00 found himself at a crossroads in his professional career. An associate at a high-powered law firm in Washington DC, Lehr came to the realization that he wanted more to life than what was offered at his firm, so he set off on an epic nine-month, 45,000 mile road trip all over North America. During his trip, a friend from college asked Lehr if he wanted to help him purchase some chocolate as holiday gifts. With a newfound sense of purpose and intentionality in life, Lehr agreed.

"Neither of us knew anything about chocolate," wrote Lehr in a QZ.Com article. "But we wanted to visit Nicaragua. It seemed like as good a reason as any to go explore the jungle down there. I quickly fell in love with the world of chocolate."

"Nicaragua is an amazing country and a special place for us," added Lehr, who earned both a Bachelor's degree in history and a Doctor of Law (J.D.) at the University of Pennsylvania. "My business partner, Derek Menaldino, got married there five years ago at his wife's uncle's house and we have been back numerous times since then. One day we discovered that some of the best cacao in the world grows in Nicaragua and so we broke out Google and tried to find someone that might be able to get us some down there. We got lucky and found our new friend, Giff. We met him in the middle of nowhere outside of Matagalpa in Northern Nicaragua and the rest is history."

Feeling reenergized in life, Lehr and Menaldino returned from Nicaragua and launched MUCHOMAS Chocolate in the fall of 2014. They now successfully sell their goods online at muchomaschocolate.com.

"It definitely still surprises me that I co-own a chocolate company," said Lehr. "I never even really liked chocolate that much before. It is going well. I think the thing that I am most proud of is how well we have integrated into the chocolate world. It's been great getting to know so many of the other interesting people who are doing cool things with chocolate.

MUCHOMAS sources their cacao from Nicaragua before processing it into couverture (very high-quality chocolate that contains a higher percentage of cocoa butter than baking or eating chocolate) in Honduras before sending it on to Ohio where another partner molds it into bars. Logistically, a very complicated process, but one that Lehr has mastered.

"It's actually been relatively smooth," said Lehr. "Early on we realized that the best way for us to build our company was to partner with experts that could help us out. First we met Giff in Nicaragua who helped us source great cacao and then we met Joe in Ohio who helps us import, mold, and distribute our chocolate. We could not do it without them! The moral of the story is that if you can meet the right partners, your life as an entrepreneur will be way more manageable and you can focus on the aspects of running the business that interests you most. For us, that was telling the story of Nicaraguan cacao.

"We learned by meeting the right people and asking a lot of questions," added Lehr. "I think people would be surprised at how helpful and willing to teach many people are."

By asking questions and seeking knowledge, Lehr also found himself in the book distribution business after a chance meeting with famous German chocolatier Georg Bernardini.

"We met Georg after he requested chocolate samples from us for a book he was writing," said Lehr. "We had no idea who he was because we were so new to the chocolate world! Turns out he is famous, and so not only did we send him chocolate, we went to go visit him in Germany! We quickly became friends and offered to help him sell his book in the U.S."

With all those experiences behind him, what would Lehr's advice be for GA students?

"I totally understand the feeling of needing to stay on track and always chasing the next achievement," said Lehr. "My advice would be that those things matter to an extent, but what you should really be focused on is figuring out how to take advantage of the amazing opportunities that places like GA offer. Not so that you can achieve the next thing, but so that you can learn what you want and develop the skills that you want. Of course results matter, which is the unfortunate nature of the world we live in. But I am a believer in the cliché that you will excel in things you enjoy.

"Don't let the apparent complexity of a problem stop you from doing something that you find interesting," added Lehr. "We literally had no idea how chocolate was made when we launched our chocolate company, and I am really proud of how far we have come."