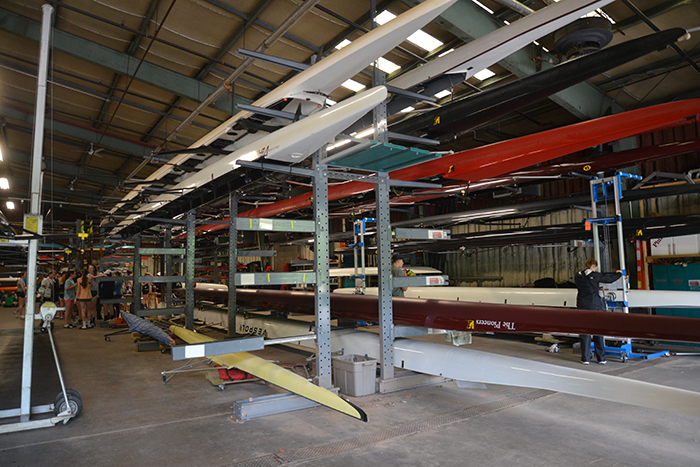 The Patriots practice out of Whitemarsh Boat Club (801 Washington Street Conshohocken, PA 19428). Regattas take place on the Boathouse Row section of the Schuylkill River in Philadelphia.

CREW BECAME A VARSITY SPORT IN 2008

In the early days of rowing (the late 18th Century) Thomas Eakins, a now world renowned artist, painted the Biglin Brothers in a pair on the Schuylkill River. Here is a reproduction of that painting that gives the ambiance of those first days of rowing when GA was one of the early participants.

GA has been part of the Schuykill Navy scene since those first rowing days in 1897. Doubtlessly the most outstanding oarsmen were Bob and Wally Pflaumer, who rowed in the early 1930’s and went on to win gold at the Olympics. Wally Pflaumer returned to GA to become a science teacher just after the school moved from Germantown to Fort Washington. This picture of the 1930 GA Crew reveals the popularity of the sport at the school. In 1930’s the school graduated about 20-25 boys a year and the Upper School (grades 7-12) population was just over 200. Beyond crew, the school fielded baseball, tennis, and track teams. The fifth and sixth persons from the left are the Pflaumer brothers who went on to row in the Olympics.

At this time, Germantown Academy is not allowing visiting spectators for athletic contests played on GA's campus. Players and coaches will be required to always wear a mask and remain physically distant when not competing.