Squash has everything: Hand-Eye coordination, mental and physical exhaustion, individual sport and team sport elements. It is physical chess and you're the pieces. Just when you think you're getting good, you realize you aren't. I love the process of discovery, of improvement, of competition. - Tim Dearnley, Head Coach

There is no information for this team. 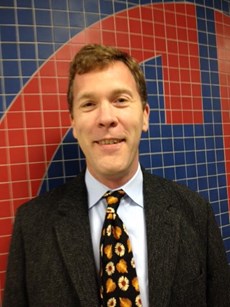 Dearnley learned squash in the junior program at the Heights Casino in Brooklyn, New York where sportsmanship and character were stressed and developed along with squash skills. Coach Dearnley believes in, and carries on, these lessons as he strives to help develop better people both on and off the squash court.

Dearnley graduated from The Hill School where he played varsity squash there for all three years he attended. From there, he went to Wesleyan University, playing in the No. 1 slot for his final two years and co-captaining the squad his senior year. Dearnley played a big role in helping the Cardinals win their division at Nationals his final two years.

Coach Dearnely is currently the President of the Philadelphia Squash Racquets Association. He continues to compete in squash tournaments and is active in local squash leagues playing for the Germantown Cricket Club.

Dearnley is a Level 1 Certified U.S. Squash Coach. He lives in Wyndmoor with his son, Mac and dog, Teagen.

The GA Squash Club is made of Middle and Upper School student-athletes, and is pay-for-play.

The team is a co-ed club sport team and is in its fifth year of existence. It is not a member of any league.

Each Tuesday, Wednesday, and Thursday, beginning in mid-November and concluding in mid-March, the GA Squash Club has access to the courts at the Gwynedd Racquet Club from 3:15 pm to 5:15 pm. In order to provide a more efficient teaching environment, we divide those players into two groups.