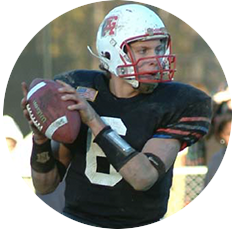 • Named baseball’s Most Improved Player in 2003

• Recipient of the Leopold Memorial Prize in 2002

• Recruited by Holy Cross for baseball and spent two years in Worcester, MA

• Named the 2006 Patriot League Rookie of the Year, the first in Crusaders’ history

• Served as the head coach of GA Varsity Baseball (3 seasons), Varsity Ice Hockey (1 season) and was an assistant football coach in 2012