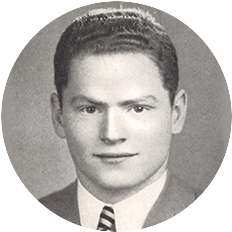 Ted Langdon brought honor to Germantown Academy while collecting eight varsity letters in four sports: tennis, basketball, football and baseball. He attended Germantown Academy for twelve years. He was captain of the baseball team in his senior year, hitting .750 for all games and .350 for League. As captain of the football team in 1946, Ted made eleven consecutive tackles in one game and was voted MVP for football in his junior year. That same year, Ted received the Philadelphia Sportsmanship award when Jack Kelly received the Philadelphia Athlete of the Year for sculling. Ted was also captain of the tennis team in 1946. In his last year of football, he tore a ligament in his ankle, but persuaded his father, the team doctor, to give him a special cast. With that cast, he managed to play tackle the rest of the season, making 2nd team All Inter-ac instead of 1st team as in the year before. After graduating from the University of Pennsylvania, Ted played club tennis and platform tennis up and down the coast, winning many tournaments. One of his victories was the New England Platform Tennis Championship. He was invited to play in the only Masters Platform Tennis Tournament and lost in the finals against the best in the country.