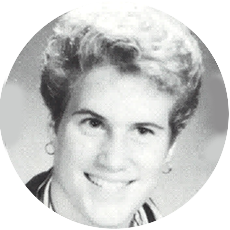 Suzy Buckovich swam on Germantown Academy's 1986 and 1987 National Championship Girls Varsity swim teams and served as captain of the 1987 Championship Girls Varsity swim team. She received the Beard Swimming Award for outstanding swimmer and scholar and in 1987, was the anchor for the 400 Free Relay that held the National High School record for 11 years. Suzy had the fastest split in the country at the time. She was named Outstanding Female Swimmer of the 1987 Prep School Championships before heading to Stanford to swim for four years and serve as a captain her senior season. At Stanford, she received the George Haines Dolphin Award for scholarship and athletic leadership, was a 24-time NCAA All-American, NCAA Champion, three-time Canada Cup Champion and two-time U.S. Open Champion. Suzy was also a U.S. All-American Team member and a USA National Team member and was a gold and bronze medalist at the 1991 Pan American Games. From 1988 to 1992, Suzy ranked in the top 16 in the world and competed in the Olympic Trials in 1988 and 1992. Following her undergraduate degree, Suzy earned her Law Degree from Indiana University and Masters Degree from Harvard University.