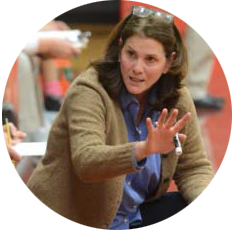 Coach Sherri Retif has more than 600 career victories. During her tenure, the Patriots secured the Inter-Academic Athletic League championship in 18 years and appeared in the PAISAA Tournament championship game in six of the seven years since the organization’s inception, including a run of three consecutive state titles. During the 2017-18 season, Retif became the only Inter-Ac basketball coach -- male or female -- to win 18 titles.

Before arriving at GA, Retif coached at the Ursuline Academy, New Orleans where her team captured back-to-back city championships. A native of New Orleans, Louisiana, Retif played basketball for the Tulane University Green Wave. She was inducted into Tulane's Hall of Fame in 1998 and selected to the Tulane All-Quarter Century team in 2001. Her career coaching record is 627-176.

In November, 2013 Retif was inducted into the Montgomery County Coaches Hall of Fame.