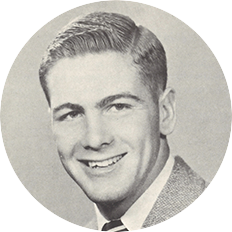 At Germantown Academy, Richard Lassen was a three-sport athlete participating in Varsity Football, Baseball and Basketball for three years. He served as the 1952 co-captain of the Football team and 1953 co-captain of the Baseball team. He was awarded the Robert W. Maxwell Memorial Football Club Award in October of 1952, presented by Commissioner of the National Football League, Bert Bell. And on the diamond, he earned the Robert A. Hoover Memorial Trophy for Baseball in 1953. His 1952 GA football team and his 1953 GA baseball team were both Inter-Ac League Champions and each received the Achievement Award from the Kiwanis Club of Germantown. Many awards were bestowed upon Richard during his days at GA. He received the Union League Boys Award in 1950, the 1950, 1951 and 1952 Academy Club Award for Football, the Academy Club Award for Baseball in 1951, 1952 and 1953 and was named to the second team of the Philadelphia Area All-Scholastic 1952 Football Team. Lassen attended Temple University and played on the 1953 Varsity Football team before attending the Philadelphia Athletics Tryout Camp in Savanna, Georgia in the spring of 1954.