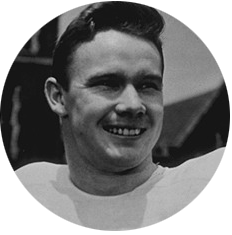 Reds Bagnell '47 played football, baseball, and basketball. He received the Maxwell Club Award for outstanding play in the Inter-Ac  League in 1946. After GA, he went to the University of Pennsylvania where he earned nine varsity letters, captained the football team, and achieved All-American honors. He also finished third in the Heisman Trophy Ballot and was elected into both the University of Pennsylvania Hall of Fame and the College Football Hall of Fame. He passed away in July of 1995.