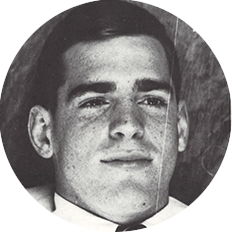 Gardy Kahoe '68 played football, basketball and baseball at GA He was selected to the All-Inter-ac squads in each sport and was selected as All-City in football in 1967. He also participated on the first Montgomery County High School All Star Game. At the University of Delaware, he played four years of varsity, was recognized as an All-American and was inducted into the Athletic Hall of Fame. While at Delaware, Kahoe set a school record by scoring four rushing touchdowns in one game. After college, he was given a try-out in the National Football League with the Denver Broncos.