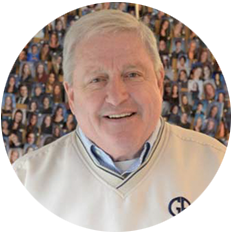 Special Recognition for Coaching and Contribution to the Athletic Program

• Voice of GA football as the PA announcer for many years

• Member of the Class of 1760, a small, select organization that was created to recognize non-alumni for their outstanding contributions to the Academy

• Inducted into the Academy Club as a faculty member

• The recipient of the Distinguished Achievement Award in 1993

• Recipient of the GA Mission Award

• Named Ambler Gazette’s Citizen of the Week in January 2014